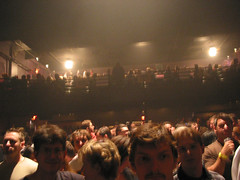 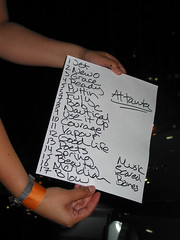 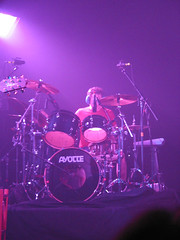 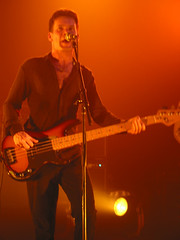 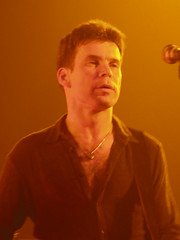 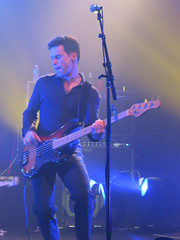 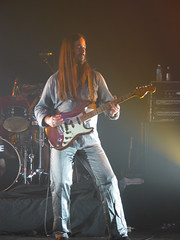 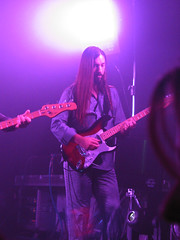 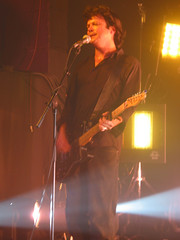 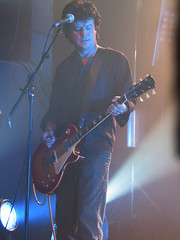 Paul Langlois
at Mayfair, Atlanta, Georgia, United States by domesticat.
10 out of 19 on Flickr

If you're looking for the photos I snapped at the Tragically Hip concert on Saturday night, you will find them in this flickr set or by clicking the photo above. Sorry about the lateness, but there were major routers having personal issues last night, and one of them was preventing me from accessing my site. Nevertheless, the slideshow's up now, and all is well for the many people who came home from the Hip concert clutching a piece of paper that had my website address written on it.

I will say this - the 19th will go down in memory as one of those spectacularly good days in life, one that makes it seem like no matter how bad the rest of the year has been, the rest of life just can't be entirely like that. The best part was realizing this as it was happening; so often we go through good days and only recognize them as such days or years after the fact.For me, it hit me somewhere around seven p.m. when, as I got in my car (more on that in a moment) I whispered to myself, "This has just been….perfect."

Jeff left on Friday afternoon to head to his hometown, for a set of two homecomings (high school and college). Friday night I spent curled up on the couch, reading, watching TV, doing silly things like my nails and petting the cats. I curled up in the center of the bed (the luxury of having it to yourself) and read myself to sleep.

The sunlight of Saturday morning woke me before my alarm could. I got up, got dressed, printed out my directions and grabbed my camera, and walked out the door.

I set the camera in the car, unlocked the door to the house, came back to the computer room, and scrabbled around on my desk until I found the little object I'd been thinking of: a Sharpie. Knowing my luck, I'd get to the concert, have an opportunity to get a CD signed for Brad, and then in a galactically funny moment, there wouldn't be any pens in a fifty-mile radius.

Remember that part. Sharpie stuffed in pocket, I drove to Atlanta.

I'd made a change of plan earlier in the week - a movie I wanted to see was showing in a theatre in one of Atlanta's suburbs, so I clutched my map and made my way down I-75 to find the movie theatre. I arrived ten minutes before the movie started, paid, and walked to the theatre.

In the past few years I've been hearing about how movie chains have put in enormous, totally swank, totally plush movie theatres. The ones we have here in Huntsvegas are pretty plain-Jane in comparison to the one I was in - I caught myself trailing fingers over the lush, velvety red fabric that covered the seats (which, I should note, reclined).

I don't know if the seat in question was the "fat seat" or the "lovers' seat" or the "mom with small child" seat, but it was twice as large as the other seats in the theatre. There were three other patrons, precisely seated so as to be as far away from every other patron as geometrically possible, and I realized that the next seat in the geometric pattern put me very, very close to that oversize seat.

I took it, and proceeded to curl up in it. It was, by far, the most comfortable movie-going experience ever.

Post-movie. Three voicemails on the cell phone. Hello Kat, Andrew, and Jody. Jody: "Forget drinks. Why don't you come out and visit with us? I'll make you dinner!"

There are few rules in life. One of them is, when an ex-chef offers to make you dinner, you accept kindly, graciously, and show up hungry.

Champagne chicken, birthday cake, and sweet tea. A southern girl can die happy after a meal like that.

We ate birthday cake, and laughed, and talked, and I think maybe I'll even be able to convince Kari, Jody's spouseling, to come to Huntsvegas for our holiday party. (As Jody said to her: "You have to remember - the Huntsville part of tech staff are the normal folks. It's the Atlanta folks that are the freaks…")

At seven, I packed up in the car once again, now replete with Jody's directions to the Roxy, and headed south. I arrived thirty minutes before the concert started, scored parking directly behind the Roxy, and asked the security guard if I could bring in my camera.

"Oh, sure. Don't see why not." (Have I left my normal home planet and landed somewhere else?) Before he could change his mind, I slid and sidled my way up to the front of the venue, and, unwittingly, into the funniest part of the day.

I began to realize that I was standing right in the middle of a group of people who were either conducting a Canada-wide family reunion, or a tent revival. People around me were yelling cities and provinces, and getting answering cheers in return from people who were, geographically speaking, neighbors.

I was quiet. I knew the moment I opened my mouth, I was -

"Originally - " here, the drawl started falling out of my mouth and people started staring - "Arkansas. I live in Alabama now."

"So, Arkansas - " the fellow clapped a broad hand on my shoulder - "how the hell did you end up at a Tragically Hip concert?"

"One of my good friends from college is from Victoria."

"Ah. Pretty town, that. So, was she your roommate?"

I juxtaposed Brad against that sentence and very nearly fell over laughing. "No. It's a he. Just a good friend."

"Hey, look at this! Arkansas brought a camera! Hey, that's a digital camera - you gonna post those photos anywhere?"

"Got a piece of paper?" I smiled and, for the first of many times that night, scrawled "domesticat.net" on a random scrap of paper and handed it to a complete stranger.

"Tell you what, Arkansas," said one of the taller guys, "if you'll let me have copies of the pictures, I'll make sure you can see to take them."

Shortly thereafter, the concert began. Brad says that what I saw - thrown clothing, hoisted flags, multilingual "O Canada" renditions, and general madness - pretty much summed up a standard Hip concert. Over and over, I heard the same exultant words - "We'd NEVER get this close to the stage back home! Can you BELIEVE this?"

Ears ringing and feet complaining, I hauled myself out of the venue after the show ended. I bought a CD. Time for the evil plan - CD signing for Brad - to commence. Except that I asked the guys running the table where the signings would be, and they said, "Heck if I know. Try the tour bus."

I waited just outside the venue for thirty minutes and then, when the crowd cleared, went behind the Roxy to wait. There was the tour bus, parked less than forty feet from my car - and, near the tour bus, virtually every person I'd stood with during the concert.

"Hey, it's Arkansas again!" I turned a particularly unappetizing shade of bright red and thought, "I'll have to write this up, because no one will ever believe me if I don't…" - and, blessedly, sat down on the asphalt.

The first member out was the bassist, who proceeded to shake hands with everyone within shaking range. Immediately thereafter, random objects for signing began to appear, but it became clear that no one had a Sharpie.

Then I remembered the last-minute dive back into the house, and began digging frantically into my pockets. Ahhh, there it was. I held it up and yelled, "I've got one!"

Before I could blink, I was at the front of the line. The Sharpie got used on everything from hospital scrubs, to setlists, to CD covers. I got a photo. Once everything was signed, the Sharpie came back to me. From then on, I was the Queen of the Sharpies, and was always one of the first to get my—Brad's—CD signed.

Between band members, we all talked. Many of them had driven distances that put mine to shame. Several were planning to get on the road to Florida in a few hours, to see tomorrow night's show. Most of the rest were meeting up in a bar somewhere in town to toast band, country, and beer.

"Why not?" Manitoba asked.

"Because, as of about ten minutes ago, it's my birthday. It's a three-hour drive home, and I want to go tonight. If I go drinking, I can't drive home until daylight tomorrow, and I just want to be home."

I started my birthday by being sung "Happy Birthday" by a couple of complete strangers in an Atlanta parking lot.

The CD got signed. I stopped outside of Atlanta to pick up caffeine- and sugar-laden food and drink, and proceeded to make a brutal, fast, and tiring drive home to Huntsville. I arrived at 3:30 a.m., came in, hugged my cats, and managed to fall asleep on the couch without ever actually making it to the bed.

I awakened, again, as the light began to seep its way into the living room.

It was still my birthday.
The CD on the table in front of me was signed.
I stank like concert - like smoke and sweat and grime and laughter - and I wished that every birthday could be like this.

If you're one of the people who came to this site off of one of those slips of paper, take a moment, use the "talk back to me" link, and send me an email. I'd love to know what your names were, and where you were from. If you want the originals of any of the photos in the slideshow - they're hi-res and printable - drop me an email to let me know which one it was, and I'll make arrangements to upload it for you.

On 21 Oct 2002, gfmorris said...
I will now have to refer to you as Arkansas at any event that causes me to say, "Eh?" [Of course, I won't get to use this until we drag you to a hockey game, eh?] You got to go to a Hip concert and hang out with a bunch of boys from Canda. I got to go to a couple of hockey games and hang out with a bunch of boys from Canada. I think you won ... but then, hey, it was your birthday. What would you say? :)
On 21 Oct 2002, Jen said...
What a great story Amy! I am glad your birthday was a good one!! :O)
On 22 Oct 2002, Tialessa said...
Sounds like you had a BLAST oh, Queen of the Sharpies!
On 22 Oct 2002, johnonhall said...
These are the moments when one feels like one belongs, and we're all glad we're humans together on this sphere. (hmm, seems I was moved) Great Story, keep em comiing!!
On 22 Oct 2002, gfmorris said...
And as I pulled up the comments to see what was new, the Hip showed up in the sidebar. Synergy, baby.
On 24 Oct 2002, johnonhall said...
Ah ha, I've succesfully gotten the time off to make my trip to New Orleans to see SBL. Thanks for the encouragement.