Put your E's where the speed ain't

Were it even remotely steamy, it could be called something along the lines of a rendezvous, but let's be realistic about who we're talking about here. Me. Instead, this afternoon could best be termed "sneaking off to see a movie with a fellow movie geek." I don't exactly specialize in salacious excitement (if that hasn't become blatantly obvious by now, there's just no teaching you).

So Matt and I met up to catch the 1:05 of The Man from Elysian Fields.On the way out of the house, I spotted the camera lying on the kitchen table. I thought about it for a moment, hesitated, and then tossed the strap over my shoulder before locking the door. It seems like every time lately that I've meant to take my camera and didn't, I spotted some of Huntsville's finest riced cars.

After gassing up my car and wending my way to the Regal 12, I checked my watch while stopped at the stoplight. Ten minutes to showtime. Perfect.

View on Flickr
at , Skyline Acres, Alabama, United States by domesticat.
When I saw this car, I started howling with laughter and immediately swerved into the parking lot. I parked near the passenger side and sat, briefly, until the giggles subsided. I looked around to see if anyone potentially owner-ish was anywhere to be seen. Since the coast was clear, I grabbed the camera and snapped a few quick pictures, making sure to get the subtleties of the white mag wheels and low-profile tires in the side shots.

There was, of course, the required and oh-so-aesthetically-pleasing bolted-on wing. I spent so much time laughing at it that I didn't even notice the insanely oversized tailpipe or the strangely-white stereo console (if you look carefully through the windshield, you can see it).

I got a kick out of his decals; he had not one but two decals advertising the company that created the monstrosity on his windshield. 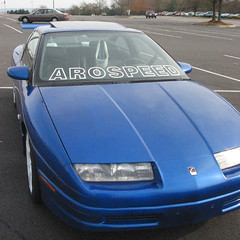 front
at , Skyline Acres, Alabama, United States by domesticat.
Oh, yes, the windshield - the front of the car was the part of the car that dumbfounded me the most. I'd be willing to venture a guess that 'Arospeed' is something like an equipment supply shop for ricers, but good grief. How lame of a name is that?

I realize that in the past twenty years or so, it's become trendy to create 'new' spellings of words. Thus, most of the American population has become utterly desensitized to the stupidity of business names like "Kristi's Kustom Krafts." Me, I'm rolling my eyes both at places like "Kristi's Kustom Crafts" and Kristi herself, who is probably confused as to why her daughter Karoline can't seem to make good grades in spelling.

Or, as Jeremy said, "Was there a limit on the number of e's at Auto-Zone?" I guess when you're trying to present the image of speed, it's better to put your E's where the 'speed' is.

Nevertheless, the movie was excellent. The pictures were just a bonus.