He was right. About twenty minutes later, I wandered into the guest bedroom again when I realized that Edmund had stopped doing scales. Sure enough, there he was, settling in for a nap on the bed. 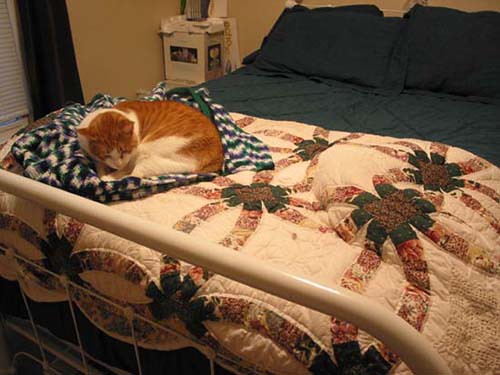 How many cats are in this photo?
by domesticat.

I very nearly walked out of the room before realizing that something wasn't right.

I walked back in again and looked again from a different angle and was immediately amused (and not just by Edmund's beatific Buddha-kitty look). Or, as I said to Jeff later, "I was sure when I made that bed, there wasn't a twelve-pound kittylump at the foot of it..." 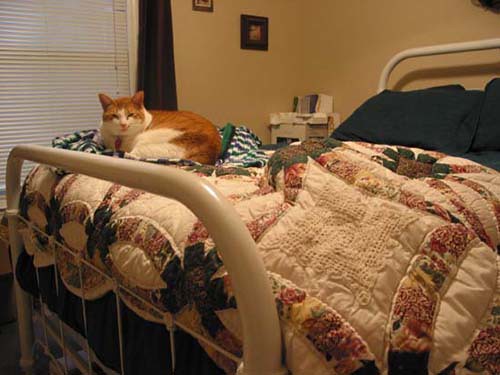 I patted the lump gently. It purred; I could feel its vibrations through the layer of quilt. Hoping he wouldn't move, I tiptoed into the kitchen, grabbed the camera, and walked back into the guest bedroom. I lifted up the quilt and snapped a quick photo without the flash. 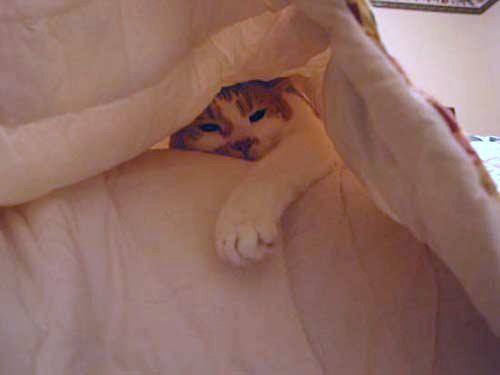 The answer: Tenzing, under the quilt
by domesticat.

Tenzing was, after all, very comfortable, and there's nothing worse than sharing a house with a disgruntled (and very vocal) cat.

We joke sometimes about how Tenzing is our little claustrophiliac kitty; the smaller and tighter the space, the more he'd like to be in it. When he wants to snuggle up in 'his' blanket, he stands on the couch next to me and paws at the blanket spread against the back of the couch, all the while giving us terribly piteous looks and the occasional mournful mew.

Can't figure out who is worse - the cat for wanting such silly things, or the cat-minders* for giving them to him.

* Anyone who has ever shared a house with a cat knows good and well that there's no such thing as a cat 'owner.' Ask any cat. They might even deign to answer.

On 21 Jan 2003, canspice said...
The relationship goes the other way: cats are people owners.
On 22 Jan 2003, Tialessa said...
What a cute story (and what a cute kitty-sized lump under the comforter)!
On 23 Jan 2003, tychoish said...
My boy kitties are just like that. The similarity in personality is just funny almost. The thing is that once you finaly think you have the social dynamic of our feline legion the third one goes and does something nutty.... heh Cheers,