Rice-chasing is fun. Sort of. Now, true, there is a certain element of danger to the chase; it's entirely likely that a man crazy enough to put an eight-foot wing on a four-cylinder car (and call it a "racing model") is also crazy enough to be packing a firearm or two…

…But I'm very, very quick about my photos, and also very, very stealthy.

There are rules to this game, you see. Never actually touch the car. Don't come out of your own vehicle until you're ready to take a photo. Work quickly: back, sides, front. Check tires for stupidities like fake rotors, check interior for m4d $tylingz, do a quick scan through your photos to make sure you don't have any blurries, then get the hell out before anyone notices.

Trust me. There is no possible way that a round, 5'2", bespectacled woman is going to explain to a ricer, "But I have this great section on my websites devoted to cars like yours!"

Occasionally, that mentality presents a problem, as in the case of today's car. I have known about this car for over a month, and have not been able to get a photo of it. The owner of this car does not live close to me, but lives on a road that I travel often. I have hoped to see this car around town, so that I could photograph it in a parking lot, but have never spotted it anywhere else.

I have tried multiple times to get photos of this car while it was sitting in the driveway. Something always interfered; too dark, glaring sunshine, or worst of all - owner tinkering with car. Definite no-no there.

No more. Today I was successful. It was a bright but cloudy day, the car was parked in an excellent position, and the owner was nowhere to be seen. I parked the next street down, and walked back until I was in viewing range of the car, and...

Now you will understand the question that's been on my mind every time I've passed this car for the past month: how could my poor Jetta be expected to keep up with this monster Honda Civic hatchback'? 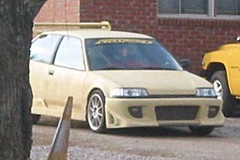 Look at all these speed-related upgrades!

side
at , Vaughn Corners, Alabama, United States by domesticat.

This is a man that knows his body kits and knows how to use 'em to their greatest advantage. Look at the size of that front kit; it's diverting wind away from the front tires, enabling them to get a better grip on the road. Most racers would stop there, but no, this guy's got his ear to the ground; he knows that a front body kit isn't going to be able to look or perform its best until those silly gaping holes left by the factory are covered with chicken wire.

Performance and handling are improved 2x by the addition of alloy wheels with low-profile tires. He is to be admired for understanding the nuances of tire performance, by providing a large decal on the front of the car that scares even more wind away from the tires, thus ensuing at least another 2x performance gain.

That decal may say Arospeed but it says to passers-by, "I mean bidness wit dis car, beatch."

But wait! The impressive attention to detail doesn't stop there! There's more to this car than just the front body kit; take a look at that rear body kit. This guy knows something that 95+% of industry professionals don't know: if you leave the rear body kit slickly painted, the air going over the top of the car will slide down the hatchback too fast, allowing the rear wheels to float a couple of inches off the ground.

As you know, this is very bad for traction, so he's left the back body kit only roughly painted. This slows the air down a bit, giving those slim rear wheels every chance they can to bite into the road and push this car forward to victory on race day.

(Whenever race day comes, that is.)

Apparently, though, the 'roughening' of the back body kit wasn't enough of a performance improvement for this guy. Since the owner of this car was not offered the opportunity to interview with the rice-chasers of domesticat.net, we are forced to speculate about the problems that led to his design choices.

We have come up with the following possibilities for the last design feature of the car:

No matter what the reasoning, the need was obvious. The only way to possibly make this car cooler, more fuel-efficent, better at attracting women, better for spreading out picnic lunches, or just plain easier to find in a parking lot was to slap a wing on it the size of Papua New Guinea.

After all, anyone who laughs at it just doesn't understand what it takes to craft a truly performance-oriented vehicle.

On 1 Feb 2003, Erica said...
You know, I think you got your funnines back.
On 1 Feb 2003, siliconchef said...
Must go fasta ... must go fasta ...
On 1 Feb 2003, craig said...
that is hilarious. someone should do a Crocodile Hunter spoof like that "Crikey! wouldja getta load of tha MASSIVE wing on that boy? They use that to SCAAARE *make scary face here* off the other ricers (latin name Honduh Stupidius) by making them think they can move REALLLY fast. Oh it's a rare treat to find one with this many decals out in the wild, I tell ya."
On 1 Feb 2003, jowilson said...
Oh my goodness. HOW COULD ANYONE DO THAT TO A POOR DEFENSELESS CIVIC?
On 1 Feb 2003, canspice said...
I've been meaning to troll the parking lots here for rice, and thought about what I'd do if there were owners around. I was thinking that I'd just say that my brother in California was thinking of modifying his '98 Civic and wanted me to get pictures so he could get some ideas. This would flatter the owner of the rice because they'd think their car was being used in a bit of an homage, I think, and then they'd be all proud to have their car's picture taken. (Of course, my brother lives in Canada and drives a Camaro, so my lie would be most excellent.) (Maybe I'll send the pictures to my brother and tell him to rice out his '84 Camaro.)
On 1 Feb 2003, ktsark said...
Here is my token comment - funny! Truly it makes you wonder how the male mind works sometimes.
On 6 Feb 2003, sandra said...
To Honda owner: Yo, dude, sorry about your dick...