When we pulled up at the restaurant to meet the crew for Sean's dinner, everyone who was already there ran toward my car. "PLEASE tell us you brought your camera. We all forgot ours. You've GOT to see this Saturn."

"Uh-oh," I said. "Where's the car?" They pointed me off to the left. Before I even saw the car, I saw the glow.Glow is a bad sign. It's the ricer equivalent of a cancer symptom. The appearance of a glow indicates severe ricer issues - ones that, as we well know, can only be dealt with by liberal usage of a digital camera.

Jeff handed me the camera and I started shooting. Thankfully, I did not lose sight of the car in the dark; the neon tacked onto the undercarriage and the strobe lights placed in the taillights ensured that this Saturn, this ricer beacon of hope, would not be lost from my eyes.

Either that, or I was just hypnotized by the awfulness. I'm not sure which.

I snapped photos of the back, chuckled at the oversized fartpipe, giggled at the rear decals, and asked Kat, "Is there anything else I need to photograph?" She crooked her finger at me and pointed at the front. 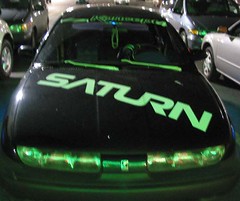 Sure, glow-in-the-dark decals make your car very easy to find in those dark parking lots, and glow-in-the-dark windshield wipers probably work by scaring (rather than wiping) the rain away...but none of that was what made my brain explode. This, however, did:

On what planet, exactly, is it cool to put alternating strobe lights in your headlights? Is the neon no longer enough to help you find your car? Oh, the humanity!

It got worse. We realized that yes, the back of the rearview mirror was set up as a green-to-blue, back-and-forth strobe. For those of you who are old enough to remember this sort of thing, think about the red lights at the very front of KITT.

I thought our howling and snickering was done, after managing to take a good picture of the rearview-mirror-strobe. For one last shot, I decided to turn my flash on, to see if I got anything noteworthy by using my flash on the interior of the car. It was dark, so prior to taking the flash photo, we had no idea what was inside the car.

We certainly did not expect this:

I started howling, because no one had been looking inside the car when the flash went off. I turned around and showed the photo to friends.

Jeremy's response said it best: "Did a Smurf explode in there?" (Either that, or he said "Did a Smurf barf in there?") Either way, the man has a point.

On 13 Mar 2003, canspice said...
I'm ashamed that the only ricer I've been able to get a picture here is of a peach-coloured Civic. *sigh*
On 13 Mar 2003, heather said...
Considering the size of this area, we don't see a whole lot of ricers. Andy saw a Porsche with a huge wing once, and I wish I could find the God Bless America truck again to take photos.
On 13 Mar 2003, Noah said...
Wow. After this, I don't think you need to take photos of a ricer ever again. Please don't let that stop you, though. ;)
On 13 Mar 2003, Tialessa said...
Dear God............ I'm laughing too hard when I answer the phone - must not read GC.net & Cat.net while working.... (Pssttt you forgot to wipe out the plate number)
On 13 Mar 2003, gfmorris said...
Yeah, I was going to note that the plate number was there. Pity that the ricer left before I could snipe it with my digicam's video function. ;)
On 13 Mar 2003, kerr said...
I once saw a really nicely modded truck... the paint changed from black to a dark violet, depending on how you looked at it, and the underlighting was dark violet... I saw it at night, and the underlighting just has a hazy effect. Maybe it's a "less is more" kinda thing, because this truck was awesome.
On 14 Mar 2003, sandra said...
*runs to put out eyes* Solarmax, you have one of those trucks in your town, too?!?
On 15 Mar 2003, craig said...
bwahahahahahaha man - at least civics have the POSSIBILITY of being fast if you put the money in the right places. but...saturn econo-box?! wtf?! and i wasn't aware they came with manual transmissions - so i guess that huge tach with shift light really comes in handy for that automatic...
On 16 Mar 2003, Robin said...
Oh thank you for this! ROTFL! There is no universe in which that is okay. None.