That's my excuse and I'm sticking to it.

June: another relative diagnosed with cancer; this time my grandmother. If you want to feel sorry for someone, feel sorry for the friends who had to listen to me while we were waiting on the results to get back. My reaction is best understood in context of my father's cancer. It's difficult to describe with any flippancy how I felt when I realized that the death rate of the cancer my father died from - 95-97% - was equivalent to the survival rate of the cancer my grandmother was diagnosed with.

Since domesticat's raison d'être is to force myself to sneak past the crunchy, sarcastic exterior shell (think nougat, only with a better sense of humor) of my life, maybe I should say that my grandmother's cancer diagnosis is why I cut my hair. 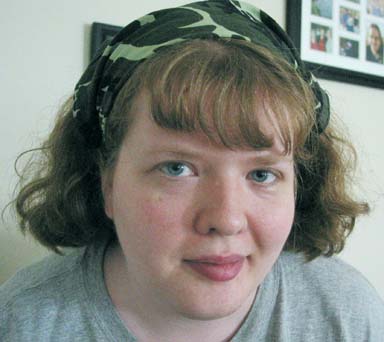 It would have happened anyway, and it would have happened before heading off to work this year's dragon*con, but I can't deny that the timing of my action marks it as a purely reactionary gesture. Think of it as my way of flipping fate and destiny the bird. I might not be able to control fates, the elements, or anything much that won't fit in my hands, but I am capable of deciding whether or not to cut my hair.

Old friends have seen this haircut before. My tradition of growing my hair long and then, without telling anyone of my intentions, showing up one day with drastically-shortened hair, is well documented. (Monica, how many times did you see me do this in college?)

I came home Saturday afternoon with a 15-inch ponytail that gave Jeff the creeps every time he looked at it. One day this week when my portion of the planet is not getting the remnants of Tropical Storm Bill force-fed into the ground, I'll mail the ponytail off to Locks of Love. 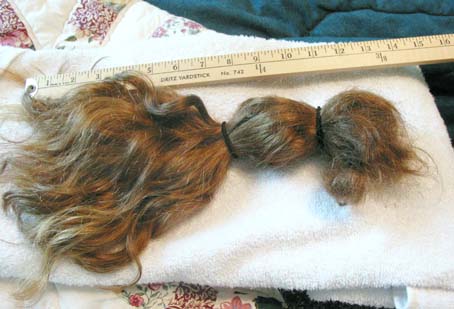 The contacts, though, have been a lot longer in coming. I wore rigid gas-permeables in the latter part of my high school days and the early part of my college years, but gave them up due to frustrations with taking care of them. At the time, I was told that there were no soft lenses that could correct my nasty little case of astigmatism.

Eight years later, that's no longer the case. My optometrist confirmed that while my options weren't exactly unlimited, I could conceivably be fitted for contact lenses that would correct my prescription:

While the locals have known about the change for some time (what with seeing me in person and all), I've held off mentioning it here until I was certain that I'd found a pair of contacts that worked well with my eyes. The first brand was a bust, but the second brand was a definite winner. I've since discovered a side benefit of the lenses; the +1.5 for reading correction that my eyes required in glasses doesn't seem to be necessary in contact lenses.

For now, I think these changes have done the trick. In some small way I've reasserted control of my life.

Not to mention my shampoo usage.

On 1 Jul 2003, gfmorris said...
-blink- Cool.
On 1 Jul 2003, Tialessa said...
Good on you!
On 1 Jul 2003, jowilson said...
I wasn't sure what I'd think about the no contacts thing, but it really works. Also, I agree with Jeff about the pony tail thing.
On 1 Jul 2003, domesticat said...
If it's any consolation, I had trouble adjusting to the idea of me without glasses. I'd worn them for so long that I'd begun to perceive them as just another part of my face (just one whose appearance I had some control over). It took a couple of weeks before I looked in the mirror, saw my face, and didn't immediately think "There's something missing..."
On 2 Jul 2003, Monica said...
But Amy... it was so much fun to watch you wrestle with that little contacts plunger back in Texarkana! *grin* I'm glad your doing the Locks of Love thing. There are probably 50 kids who are going to need little rasta hats now!
On 2 Jul 2003, Suzan said...
Ah, yes...the contacts plunger! I had one of those too and they truely were a pain. There was no other way for me to get those %#@! things off of my eyeballs. Hair looks good! I can't wait to see it with the D-Con locks.