Most participants are taking this literally, by snapping a photo a day of Their Workplace. I'm shooting less often, and looking for something I don't quite know how to quantify. Moments. Images. In the absence of feeling comfortable writing about that place I spend my days, I find myself growing increasingly comfortable with the idea of letting the pictures tell the story.

I started the project partly to document this part of my life, and partly to give myself license to experiment with my photos. I'm related to several paper-and-film amateur/semi-pro photographers, and without realizing it, I had picked up their belief that the act of photography was the end of the composition. The idea of doing anything past levels or color correction (things that in the past could be tweaked while developing the photo) seemed innately wrong, somehow.

I ended up asking myself what I'd do if I gave myself license to play around with the images I took? What if I was honest from the outset about my intent to treat the images only as starting points, to use all my print design tools (cropping, color management, etc.) to create illustration and evocation, not just denotation?

This is the collection so far. Only 24 photos so far; there's much left to do. This week I added three shots from a flag-raising, just because rich, bright fabrics stood out so much in the muted palette of winter colors:

I also decided that I wanted 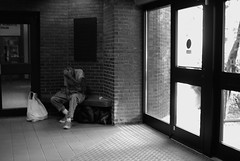 to be available for public view as well. I've had that photo friends-locked for over two months and hesitated releasing it; it is not the image that any public entity would want to present, but it is reality, and it is accurate, and to pretend otherwise bothers me. I wish I had been able to shoot that photo with a tripod, because the final image was blurred, but this was not the kind of situation that lent itself well to stopping and saying, "May I take your picture?"

I had to ask myself what my purpose was: photography, or public relations? It's a difficult line to walk, and it's a choice I will have to make with every photo I post. Sometimes honesty has to be tempered with discretion. But reality isn't always pretty. Sometimes it's scary and frightening and damn near breaks your heart while it happens.

But that is life, and that is what I see.

(Those of you who have spoken to me in the past day or so know that two paragraphs up, I'm referring to a very specific incident that happened earlier this week. I'm not ready to write about it yet. Maybe soon. Originally I thought about linking to the news article, but it just doesn't feel right to do so. Not yet.)