Some people have a bucket list. I get the general idea but I find the approach depressing. I'd rather think of the process of life instead of focusing on its endpoint; as a result, I refer to my list as a Life List.

I accomplished a few things on my life list in 2009, and as we well know, the only thing I like better than adding things to a list is crossing something off of a list, so I've been eyeballing #5 for a while. After Adam announced his engagement, I realized his wedding quilt was likely to be as good an opportunity as any. Here was a friend who took a great deal of pleasure in subtle things that were carefully made; even two seconds' worth of thought told me that something with right angles and straight seams just wasn't going to do.

I've been scribbling ideas for his quilt for months now, but still don't have a completely finished design. I picked up fabric in Washington and Minnesota, but tonight was the first night I got down to this: 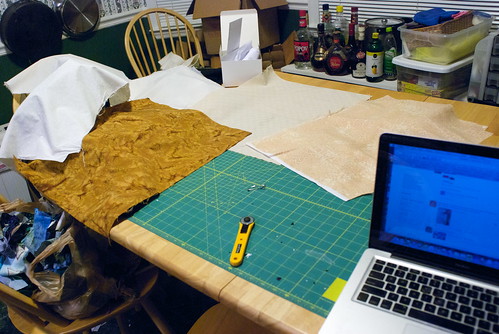 I'd been putting it off for a while because I'd taken a chance; I bought fabric before I was entirely certain that I could execute the design in my head.  Actually -- to be perfectly honest -- I'm still not entirely certain I can execute this design. It's going to require careful gridding and intense attention to detail. There are no bright colors to hide behind. The devil is most emphatically in the details.

The good thing about a Mariner's Compass is that it has straight seams. The bad news is that, for the most part, there are narrow angles and a ton of bias edges, which stretch if the cat looks at them funny from across the room. So, the plan? Starch beyond belief. Measure carefully. Assemble in the right order. Cuss.  Be grateful the spouse is making dinner. Pat your new sewing machine. Shove the cat off the table. Repeat. 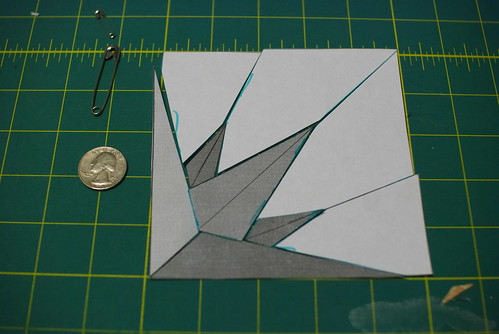 I'll need four of those to complete one star. (Do NOT ask how many stars are in this quilt.) After scissoring the template apart, marking fabric, and cutting carefully, I was ready to try assembly. Lesson one: mark your fabric when the angles change, because those are your endpoints and it's in your best interest to nail every single one, every single time. Lesson two: washable pens are glorious. Lesson three:

... there is no lesson three; check again tomorrow night.

If you're lucky, you end up with something like this 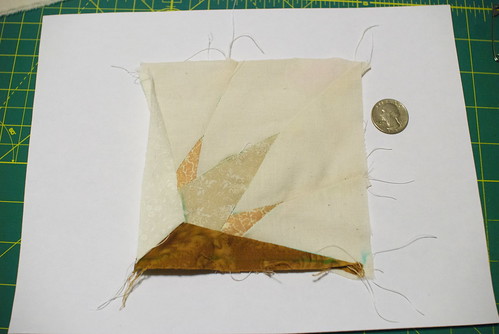 somewhere around the time your spouse brings takeout Chinese home, and you can rest your eyes and relax and do something else.

The points all matched, and realistically I will get faster at the assembly process now that I understand I need to leave tick marks for angle changes, but I suspect I am about to undergo the annoying process comfortingly known as A Learning Experience, where one goes through a lot of frustration and madness a single time in the hopes of never having to go through it again.

Please be awesome. My friend is awesome. I'd like the quilt to match.

I'm calling it a night.