We've been in the middle of a major transition in our living room; we've sold off several components, bought a few others, and drastically changed our media consumption to fit our new equipment and plans.

We sold off our old media box, our old pre-amp, a vintage tuner, and our old 32" tube television. We added in a newer flat-panel television and media box that greatly simplified the number of cords needed to make our entertainment system work.

The only problem? The television didn't fit in our entertainment center. We knew this from the start, and we knew there would be an issue of getting rid of it, because as Jeff put it, it was a victim of changing technologies. Tube TVs are not the wave of the future, to put it mildly.

We first tried to sell the entertainment center. No luck. Then we cut the price. We had a buyer, and that fizzled. Then we put it on freecycle, and the dance began. It took getting to our third contestant before we got to someone who would actually commit to a date and time, and then, last night -- of course -- they called multiple times, getting later every time.

They wanted to know if we could push this off to another day. I, being a somewhat exasperated freecycler, said no. Jeff concurred - we'd already let the meetup time slide by three hours, but if we gave them permission to come on another day, who knows what day they'd actually show up?

So, a little after 9pm last night, we finally got rid of the entertainment center. Hooray large empty space in the living room, where the monolith used to be: 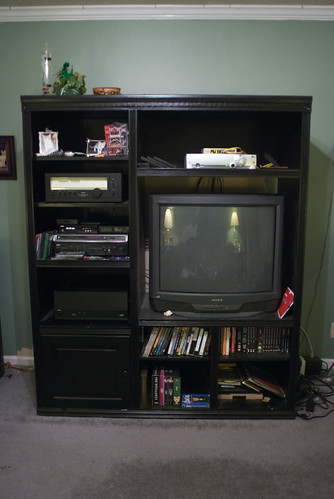 Of course, the paint can with the paint for the living room was dry when I opened the spare can, so I'll have to go to the shop today to have the color recreated. Luckily, I still have all of the info, and I bought from a local and high-quality shop.

When the new (smaller!) entertainment center starts to rise from the ashes -- tonight, I hope -- it'll be a vastly different media plan:

The hope: make what we watch a conscious choice, not idle consumption. If we watch a movie or listen to a show, have it be new to both of us and do it together.

Oh, and Jeff has a Kindle now. Why, yes, this IS a related purchase...