Comfort care, a matter of time.

It is a matter of time, they say—yours and mine, and someone else's who doesn't even realize it at the moment.

I have been in Arkansas since early Sunday morning. How early, exactly? I don't remember; I don't remember when I crossed the Mississippi River, but I do remember that I was sobbing when I did.

We spent Saturday in Nashville with Dan, who was in from Michigan to help the UMich lacrosse team out (he videotapes their games). We spent an absolutely wonderful day there with him, and drove back in the early evening. 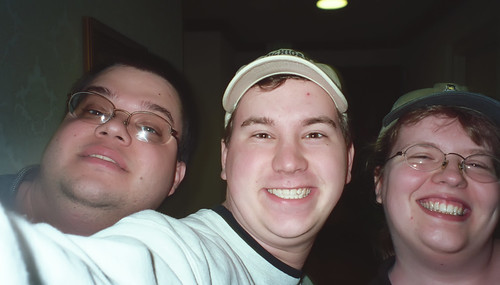 When we arrived home at ten p.m., there was a message on the machine from my grandmother, letting me know that Dad had begun to have trouble breathing in the middle of the afternoon, and that his blood oxygen saturation levels had dropped to around 68 percent. Dad was transported by ambulance to the nearest hospital, and was transferred to the cancer ward at Baptist in Little Rock as soon as a bed became available.

After speaking with my grandmother, my sister called me from a pay phone.

"Come home. Now. Dad probably will not live through the night."

Within fifteen minutes I was on the road, wardialing friends on my cell phone to let them know what was going on, and making frantic arrangements for house and cats and anything else that came through my mind.

Three hundred and fifty-three miles, most of them in a howling thunderstorm that squatted over Mississippi, Tennessee, and eastern Arkansas, meant that it took me six hours to make the trip.

I arrived at the hospital at 4:35 a.m., according to my watch, and took the elevator to the tenth (and top) floor.

"Comfort care," they call it. It's a kind way of referring to providing pain management for terminal cancer patients, those patients whom modern medicine can neither sustain nor cure. "Comfort care," in terms of my father, is an ever-changing cocktail of medications like morphine, dilaudid, toridol, and fentanyl, in an attempt to keep him sedated and relaxed—attempts that don't always succeed.

Comfort care is sleeping in shifts with your mother in a hospital room so that your father is watched at all times. Guiding his hands away from his oxygen mask. Making certain that his saline drip is replenished before the loud beeping alarm goes off. Fanning him to help evaporate away the sweating that the medications cause.

There is no equivalent comfort care for the person who sits by the bed, for the wife and daughters and sons-in-law who listen to him call out in pain, who see him open his eyes and recognize nothing that he sees. Who listen to him as some part of his brain registers that he is wearing a mask on his face, which makes him think that he is on the fire truck, answering a fire-rescue call.

Last night he called out, "This is Tull One, come in, Central, do you read me?"

And yet he does not recognize me. Or Mom. Or Sis. But when he cries out, we check our watches to see if we can give him a booster dose of pain medication.

Comfort care, for the living, is hugging your mother and telling her, "I'm going to go to Colter's to get a shower, some sleep, and some food, but not necessarily in that order," and she understands why you have to go.

Comfort care, for the living, is getting a hug from an old, old friend, but having to back away because the simple fact that someone is willing to try to comfort you is enough to make you want to sob on contact.

Comfort care, for the living, is the cell phone that rings at a random hour, with the voice of an old friend on the other end of the line who says, "Look, I know you're up. Walk out of the room and talk to me."

In the ways that count, my father is already gone. What lies behind is a shell, something that is him and is, yet, not him. We tend to him even though he will never know that we did so, because it is the right thing to do.

Dad could go at any time. For now that means we stay with him constantly, so that when it happens, he will not be alone.

I will write more details at some point. Right now is the first time I've had to myself since arriving in Little Rock on Sunday morning. Right now I need that even more than I need the emotional and intellectual release that comes from writing. There is more forthcoming. Just not right now. Not yet.