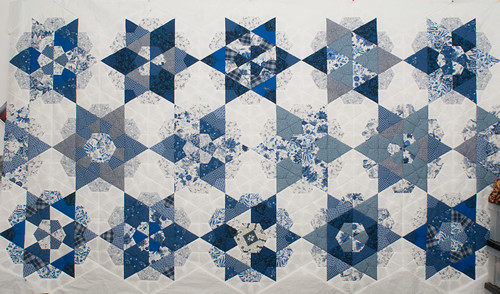 Recipient:
Dan's little one!
Pattern:
Rose star
Level of completion:
Completed and given away

Delft Punk has had a placeholder on my site for a long time, because I haven't known what to do with it, and I haven't known who it was for. I know that this project has been my travel project for a couple of years, and only recently have I started working on it with any degree of fervor.

I know that I initially bought fabric for it in Minnesota, because I saw a set of Delft blue fabrics I liked. I put them aside for ages, and then something made me decide to tackle it using English paper piecing.

This layout came from Denver, where I was attending a conference a year ago: 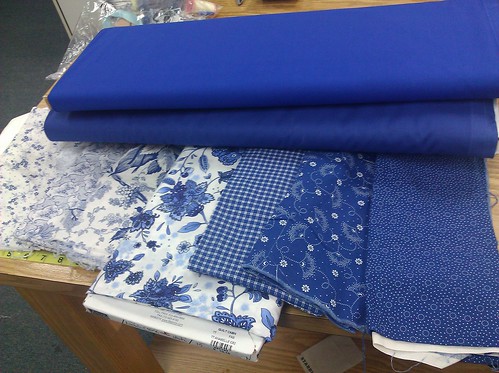 Fabric testing in Denver
by domesticat.

and then back to Minnesota again, because that's Jacob's kitchen table we're testing patterns out on: 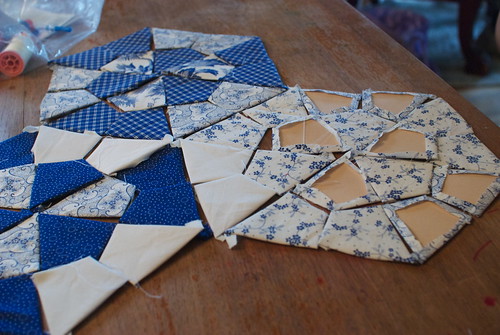 I've photographed it against the back of airplane seats, 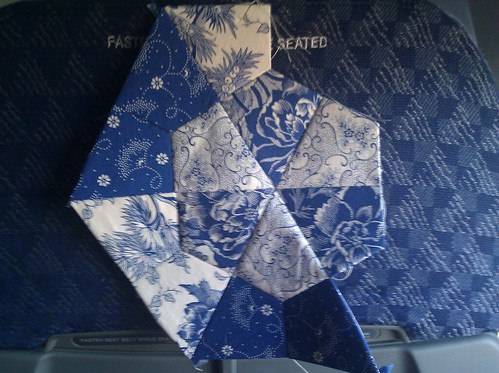 hung it on my design wall in Alabama, 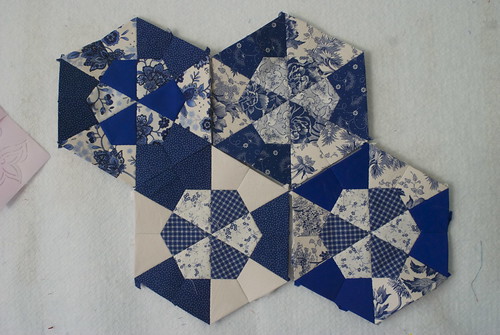 assembled finished pieces in a hotel room in Boston, 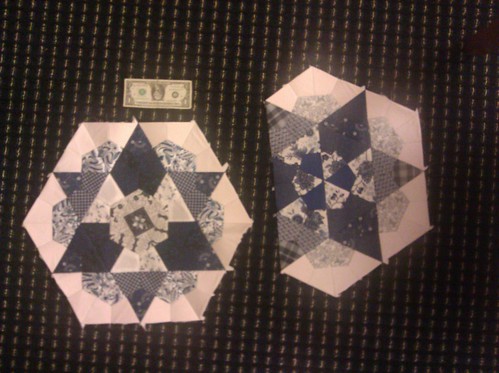 and somehow managed to take it to Atlanta for Thanksgiving without getting a single photo of any of the pieces at Brian and Suzan's house.

It speaks a lot to my life in the past two years: disjointed, frequently in motion, a bit scattershot. I've picked this project up and put it down again as time permitted, but it has been one of the set of projects that I've always meant to come back to and finish. I've committed, recently, and have agreed that it'll be going to a coworker whose wife is expecting their first child. (Four coworkers pregnant right now ... FOUR. I cannot keep up.)

The pieces are a bit beastly, too. They're 3" kites -- a hexagon with 3" sides cut into pie wedges -- and each giant hexagon requires 72 kite pieces. The finished hexagons measure 20.5" from point to point. (Why did I commit to a layout that requires 14 of them? Because I'm a dork.) Finishing a single one is a bit of an achievement, and is why this quilt will take as long as it will.

But, hey, it's been waiting a couple of years to get finished. Another month won't hurt -- and it will free up a precious drawer in my sewing room.

The moral of the story, I suppose, is that every project, every plan, finishes one tiny step at a time. If you keep nibbling away at it, eventually you finish.

Though I guess that means I'll need another sewing project. If only a box of sari fabric hadn't arrived from India this past week... :D