In sickness and in stealth

Day One: attempt to die of unknown stomach ailment (currently assumed to be food poisoning). Fail miserably. Day Two: Attempt recovery. Most of said 'attempt' involved the regular ingestion of aspirin to make my body believe that its true temperature was closer to 98.6°F than 101.2°F.

Blame it on the aspirin, or the fact that it was Christmas Eve and Jeff was still queasy and needed quiet. No matter the cause, I know the effect: I took the camera and went rice-hunting.Though, honestly, is it really "hunting" when all you have to do is a quick drive-by around the back of the mall? That's along the lines of shooting fish in a barrel and calling yourself a master fisherman.

It's not hard. Drive around the back of the mall. Like the old Magic Eye pictures, the best thing to do is to stare at nothing in particular, and the riced vehicles snap right into focus. More specifically, once you know what to look for, they're impossible not to see.

So what, in sickness and stealth, did I see? Quite possibly the thickest concentration of ricers found at the mall on any given day, ever.

I try not to be seen. I park quickly, snap photos, giggle madly, and am off again. The entire process rarely takes more than two minutes. I don't take photos of cars whose drivers are present or nearby. I really don't think my pointing and laughing at their 'ride' will do much for prolonging my life.

Speaking of prolonging, let's talk about agony. The owner of this black Accord seems to be an expert on this agony thing. How about not bolting on a wing the size of Manhattan, sir? 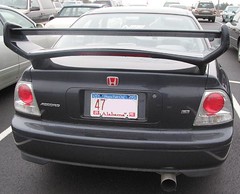 back
at , Skyline Acres, Alabama, United States by domesticat.

I'm also beginning to think there's a special ratio that I should mention more often: tail pipe should NOT be larger in diameter than brake light. Period. I can't prove that the universe hinges on this rule, but I'm starting to think it should. 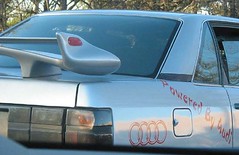 Speaking of enormous wings, there's a reward for the first caller who can explain what the owner of this Audi was thinking. I regret that we don't have a better shot of the Monaco-sized wing on the back, but Danielle was faced with a tough shot in heavy traffic, and the fact that she got a shot of this quality is to be applauded. I do wish we could have gotten a shot of the peeling decals on the hood of the car, though...it was not to be missed.

We also regret to inform the owner of this red Grand Am that his windshield wipers are a crime against humanity and must be confiscated immediately.

Next up, for more generalized crimes of hubris and snickerage, a car whose license plate I'm not even going to block out (though, for search engine purposes, I'm not going to spell it out here and I ask that you do not either). I've had many reactions to riced-out cars, but never before have I actually felt that I would wet myself while laughing.

Flickr
After all, this red Mitsubishi is 2 dangerous, and I should stay back.

Flickr
Those who tiptoe along the side of the car learn that it is actually powered by McDonald's yellow.

For those who are brave enough to stay ahead of this red beastie, there's a nice message helpfully printed in reverse.

Mostly, I'm just McFeared at the appalling amount of free cash this young fellow seems to have on his hands. You'd think he could afford better than McFood.

Lastly...I present the greatest rice crime against humanity that I've ever seen in Huntsville. Sean has been telling me about this car for quite some time, and I just had to see it for myself to understand its sheer, awful power.

I've seen lots of things on cars. But 'Girl Power'? Girl, whoever you are, that ain't power, that's a corresponding excess of fundage and total lack of taste. 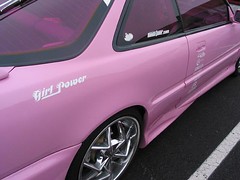 This car's got it all. Literally. On the back you've got all the standard ricer accessories: wing, body kit, spray-painted chicken wire, uni-wiper, decals, wing, and extra-speshul taillights. There are supposedly-spiffy wheels, superfluous body kits, and more decals than you can legally shake a stick at:

Need inspiration? You can get it from the back windshield. Lest you forget about the whole girl-power statement, it's right above the gas tank:

They were somewhat kind, though. Amidst all the horribly painful pink window tinting, the windshield provides information on who perpetrated this monstrosity. Now I know who to avoid from now on. Wouldn't want to accidentally give them money:

Remember: ricers, like recreational pot smokers, are secretly funding the terrorists. They must be stopped!

On 26 Dec 2002, gfmorris said...
Merry Christmas to us. Heh.
On 26 Dec 2002, Tialessa said...
*snicker*
On 26 Dec 2002, Anduril said...
Got Rice?
On 26 Dec 2002, Kevin said...
That is the ugliest car i've ever seen in my life. I wish that you would take pictures of the owners of these cars, but I do realise the risk involved :(.
On 28 Dec 2002, Rick said...
I'd love for a ricer to come to post a defense of their 'lifestyle'. I'd be interested to know just how cool they think they are :)
On 29 Dec 2002, Robin said...
ROTFL! Those are the most horrendous machines I have ever seen! The pink windows on the GirlPowerMobile do it for me though. I bet they have those because they are more flattering. *snorts*
On 26 May 2003, Jayse said...
You want a defense? Let's see what I can summon up. Bear in mind it's late, and I laugh as hard as you might at some of the oddities that get thrown together on econo-box frames. Remember the 40's and 50's? The racing crew of 'Greasers' and rockabill-esque stereotypes? They'd chug motor oil and eat bolts if it made their cars belch flame from the exhaust and escape Johnny Law and his pull-over lights. Remember later on, the muscle cars? The Chargers, the Challengers, the Machs and the Camaros, the Firebirds and the Trans Ams... I'm skipping back and forth on some years here, but you've the idea. Have you bloody looked at the sport's car market lately? Where's a young girl or guy supposed to get a muscle car? Buy a pile of rust for 10,000 because some old man knows it's a 'collector's' item? Doubtful. Not doubtful about the car's rarity and value, but doubtful the kid's got that kind of greenbacks for the purchase of something that will nickel and dime him to his or her death. Enter the Civics. Honda practically throws loans out into the air - catch one, and you've got a Civic! Congrats! Mistu and the rest have followed suit. This is no different than some punk turning wrenches on his old man's handed-down grocery getter - turning four wheels into a hobby and entertainment - and perhaps a death trap. More fun! The 'Ricer' Lifestyle is simply another walk of life in a society of labels and stereotypes. I'll always consider myself a greaser - I grew up with the Dukes, damn it all. Give me a 74 Trans Am any day of the week, or hell - a 59 Plymouth Fury - Sweet Christine. It's about enjoying the look and feel of YOUR car, making it yours. Do I care what the guy next to me thinks of my car? Not really. I simply want to enjoy the look of my car. For myself. If it makes the owner smile, who cares what a distant observer might think? Besides, Ricers aren't trying to impress anyone that's not into the 'Import' scene. It's impossible. those damn aluminum wings are too ridiculous to get chicks, unless they're all ready predisposed to the 'Ricer scene.' For the most part, it's like a ticket to a VIP room - you got a cool car, you get to chill with a cool crowd. And there are so many different crowds, with so many different hobbies, it seems wierd to single out the one that chooses to 'hook up' cars ( whether hooking up entails any modifications to actual performance remains to be seen ). At least it gets us off the computers, and out in the garage. It gets us socializing, and actually having human contact, versus other 'crowds' which spend most of their time gaming their life away for frags and tournament points. But that's just my take on it ;) Fire away, mon `capitone! I am ready!
On 27 May 2003, domesticat said...
Heh. Flame that? No, I definitely got a kick out of it. Except for the getting-off-the-computer part. Mostly because it was funny, but not the way you intended it. I just got home from Yet Another Trip To Atlanta yesterday. We'll be in Mississippi next weekend for a friend's wedding, and I'm likely to be back in Atlanta the weekend after that for a friend's birthday. That's completely ignoring the standard during-the-week gatherings. I've got to have a nice web interface for a database set up before I'm back in ATL. I just have to find time to do it. :)
On 27 May 2003, gfmorris said...
I still cringe when I see this car ...