I tiptoed out early on a Saturday morning to buy ingredients for salsa, leaving my spouse, still sleeping, to be guarded by the house cats. I bought a shower gift and salsa ingredients, and was well on my way through processing the vegetables into finished salsa by the time Jeff woke up.

It had to get done, not because it was a chore but because I had promised, and it was my own fault that I'd stayed up late with friends the night before, talking and playing games instead of shouldering responsibility and purchasing habañeros and peppers for food-making.

Thanks to Jody, I understand the dance well. Salsa in a minimum of time is an art of juggling the oven and prepping things in the right order. Turn the oven to broil, and while it heats, drain the beans and corn and add them to the container. While the peppers roast, start chopping ingredients in order of pungency. Once the peppers are out, and cooled, peel and seed them, chop them, and then chop the onions, garlic, and hot peppers.

Sometimes I think that the part of my brain that has forgotten how to waltz has simply retrained itself to the steps of the kitchen dance.

Later that afternoon, we coalesced into a laughing, near-shouting herd at the location of Kat and Sean's shower. I watched much of the proceedings through a minor haze of sleep deprivation and was reminded yet again that underneath the drudgery of a lot of ceremonial wedding preparations lies a true excitement, a wish for well-being. Marriage is only the legal announcement of a life transition that has already happened; much of the rest is the way for friends and family to make such a major life change flow as simply as possible. Our desire to see those we love live in comfort and happiness sometimes comes in the corporeal form of towels and sheets.

I went home, desperate for even an hour's nap, and lay down on the guest bed, trying to ignore the fact that I'd forgotten to buy cat food on the way back from the shower. I was still annoyed with myself for putting one too many habañeros in the salsa - and doing so before putting my contacts in, thus guaranteeing I'd be wearing glasses for a few days. I thought that I would not sleep, given that I only had an hour and a half to rest, and when I awakened, I thought that it had not been enough.

For a few minutes, I sat in the computer room, wondering if I should bow out of the night's festivities. I breathed deeply, stretched, trying to shake the sluggishness of sleep away. I yawned, petted the cat, and decided that some life events trumped sleep.

The fog of sleep began to lift as I got in the car; by the time I reached the freeway I realized I was actually happy to be where I was going. I was the last to arrive at the restaurant, and received my share of teasing for being slightly late. Bowing out wouldn't have been an option; if I hadn't shown up in another five minutes, they were going to take turns wardialing my home number until I answered the phone or showed up at the restaurant.

Even I can take a hint.

I balanced native Thai heat against Thai iced tea and came out even. We talked of spouses and marriages and everything less consequential, and when it came time to pay and leave, I excused myself to make a few stops on the way home.

Nobody had asked for libations to be brought to Misty and Stephen's, but I thought perhaps that if some arrived, they wouldn't be turned down. I showed up, late and last, at Misty's with a bottle of vanilla Stoli in my hand; happiness was pronounced when Misty showed us the stack of regular, vanilla, and cherry Cokes that she had just placed in the fridge.

We had our drinks with a side of movie and we laughed, a little more loudly, a little more freely, as women are wont to do when only in the company of other women.

I drove the eight-tenths of a mile back to my house a bit more slowly and with a bit more care than usual, since I'd had a bit of alcohol that evening. The early-September air held the first cool blush of fall, a welcome relief after the sweating damp of August heat.

A few fireflies flicked their cool, yellow-green light along the sides of the road on my way home, their sudden-flash moments of brightness followed by long, slow fades back to darkness. Fragile little summer creatures, their appearance heralds the beginning of another sticky Southern summer, and their disappearance points to the sweaters of fall, and the marriage of two friends in a few weeks' time. 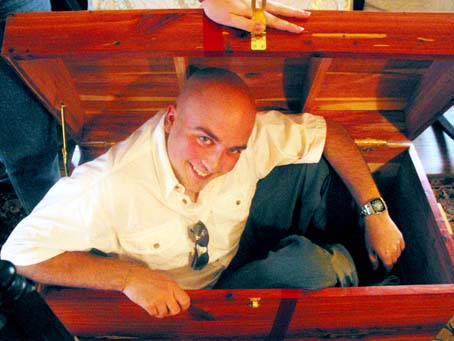