Somewhere between the second episode of The Muppet Show and my fourth orange-flavored drink, courtesy of Brian, I began to realize that this Thanksgiving holiday thing might have some merit, after all. Given another couple of episodes and another fizzy drink or two, I might even start singing the praises of this holiday.

Scratch that. Thanksgiving == good. A pity Thomas and Danielle fled before the evening got really amusing.

There comes a moment in life when you realize that you're no longer one of 'us,' the well-defined counterculture with something to rebel against, but instead one of 'them.' The culture. The people being rebelled against.

My moment came early on Thanksgiving evening, during the blissful purring haze brought on by a simultaneous scalp and back massage performed by two electrical engineers, an AMI engineer and a Georgia Tech professor, neither of whom was my spouse. Any momentary questions about when professors stopped being Them, and became ordinary folk I could laugh with and watch Daria episodes with, went away with a sudden need to have my scalp massaged just a little more to the left. Judging by the laughter, apparently my face and whimpering noises were a sight to behold.

(Hey, Brian, can I schedule another one of those for next year? Unless something almost inexpressibly fabulous happens in December, that was officially the highlight of my year.)

I blame the aftereffects of the lovely dual massage for the complete desertion of my sanity this morning, when I made my semi-annual trek to the yarn store and walked out a short while later in a bit of a daze. Sock yarn? Why the hell did I buy sock yarn? I don't even know how to make socks!

For those of you who asked, I've finished Heather's scarf. It's of two skeins of Noro Silk Garden, color #8, with the skeins knitted A:B::B:A to get matching ends. I was rather pleased with the results. 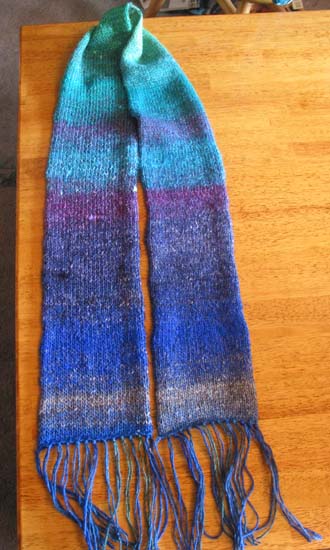 The kind folks at Ye Local Knitting Emporium confirm that the TSA has surreptitiously grown a clue, and now allows passengers to bring knitting needles on board aircraft. It appears that on Wednesday, as I wing my way from Birmingham to Phoenix, I'll be able to work on this scarf.

Excellent. Just excellent. If only I didn't have so much to do before Wednesday morning's flight...

On 30 Nov 2003, siliconchef said...
Okay, for the record, I have nothing to do with anybody buying yarn ... ever (sock or otherwise). I will claim credit for organizing the fun evening, but I can't be blamed for your crack-like knitting habits.