The twitter-followers know I've been working on this for a while, but I haven't mentioned it here because I didn't want to jinx myself. Regardless, my part in the process is done: 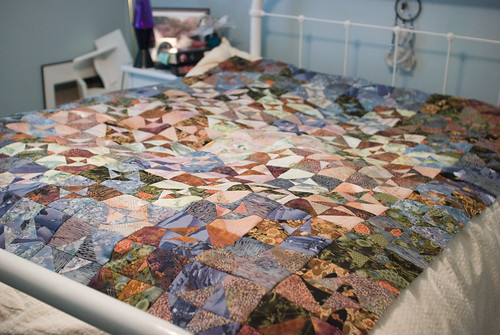 I should have started this project years ago, but I was too chickenshit to do it. Years ago, on a visit to Heather and Andy, Heather offered to assemble a quilt top for me if I bought the fabric. I did, and she started working on it, but life eventually became too busy and she sent the pieces back to me, with all of the instructions and equipment I'd need to get started.

The box held enough fabric and squares to do at least two quilts.

While in Washington, a morning chat over tea with Debbie (Adam's mom) caused her to bring out the quilt top she was working on. I told her the story of the unfinished quilt top, and to say that she was encouraging was an understatement. She reminded me that it wasn't always about skill, but instead about patience and precision. I didn't have to be utterly knowledgeable. I just needed to follow directions, cut straight, and sew straight.

I toyed with the idea of giving the fabric away to someone with more skill, but resolved on the plane to at least pull the box out and look at the fabric. When I did, I realized there was no way in hell I was giving this fabric away. It had been years since I'd picked it out, but the combination of colors and patterns had my tastes and opinions stamped all over them.

I started reading over the books, and after waiting a few days to see if this was a passing urge, I got started. Working with the rotary cutter just made sense to me, and the process gelled more quickly than I had expected.

Even more surprisingly, to me? I actually liked the process.

Of course, there had to be geekery involved somewhere along the way. In my case, it was using the camera to shoot images of each square, cropping the images down in photoshop, and then importing them all into Illustrator to determine the final layout: 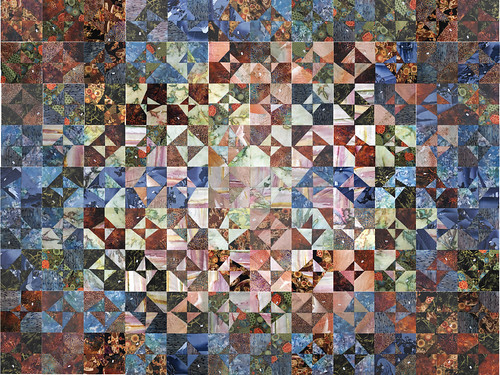 The original version of the photo was large enough to allow me to read the ID number of each square. It made final assembly surprisingly easy. All I have left now is to clip the threads, iron the seams flat, and toddle off in the next few days to buy batting and backing before handing it off to a quilter to assemble the finished product.

I never thought I'd say this, but I enjoyed piecing this quilt top, and am looking forward to doing another. (The world may have just officially ended.)

Even just looking at the layout from above it totally gels with your personality-- I can;t explain how, but that quilt seems to be very YOU. And that's FABULOUS!!!!!!

It's got my color preferences all over it. It also contained a few good lessons for any future quilts that I do.

There was one fabric - a light green/yellow batik - that was NOT my favorite. I realized with about 30 squares to go that I was actively avoiding using it, because amidst all the darker colors, it looked very plain in comparison.

As a result, I had a lot of it left near the end of the process, and as I started running out of other fabrics I used it more and more. Many of the last 15 squares used the green/yellow batik. Without it, I wouldn't have made it to 108, but I was sure I would be disgruntled every time I saw one of those squares on the quilt.

I was QUITE wrong. The light green/yellow batik is one of only two light colors in the quilt (the other is a pink batik) and those lighter-color squares turned out to be very necessary. I had two squares that were light-on-light, which became the center of the quilt, and then I started using all of those light-on-dark squares (many of them from those final 15) to blend from the very light to the dark-on-dark squares.

Just because a fabric isn't your favorite, or your favorite color, doesn't mean it isn't necessary to the overall pattern.

Sounds simple, I know, but I was thinking "fruit salad" (where every distinct ingredient is tasty on its own)<?em> instead of thinking "cookie" (where several ingredients not tasty on their own combine to make something you sneak out of the kitchen when no one's looking).

Absolutely lovely :) It looks like one of the 3D eye prints, but made to evoke the feel of a person instead of an image. Well done indeed.