"People get uptight about the most bizarre things," Jeff said, nodding, as I showed him the pictures. I agreed.

I'd been zeroing in on a sweet little parking space at the store when the battered blue Dodge had caught my eye. I tossed my car into 'park' after whipping around the row, and had my camera ready before I walked by the car.

While I'm legally allowed to photograph cars, I prefer to do it as inobtrusively as possible. 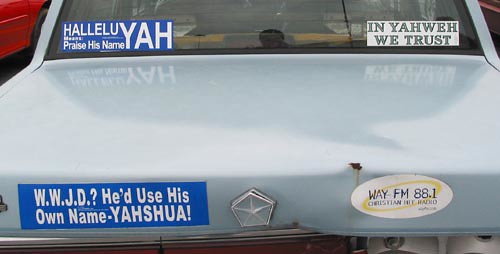 I had the lens cap removed and the camera turned on before I even came in view of the car. Thus prepared, the actual process of taking two photos took less than four seconds. There was plenty of light; I didn't even bother to check the photos to see if they were acceptable. I just shoved the camera back in its little bag, turned, and went into the store to do my errands.

You can determine a lot of things about a person from what bumper stickers they place on a car. Most folk don't take bumper stickers lightly; the sayings and emblems they place on a car are likely to represent their most strongly-held beliefs. Owners don't put "I like ice cream" or "Blue is my favorite color" stickers on cars. They put things like "Re-Elect Gore in 2004" or "One Nation Under GOD."

Bumper stickers are our casual way of stating beliefs too forceful to be bandied about in most polite conversation. (For those of you who ask, the sticker on my car is "Go away or I will replace you with a very small shell script.")

I'm thinking that Mr. Blue Dodge is a wee bit wrapped up in semantics. Anyone whose most strongly held beliefs end up leading him to put up a bumper sticker that says "W.W.J.D.? He'd Use His Own Name - YAHSHUA!" (and another that says "HalleluYAH Means Praise His Name")....I'm thinking we've got some semantics issues at work here.

I mean, shoot me if I'm wrong here, but if you're going to get real cranky about how a name is spelled or written, shouldn't you just go back to the original Hebrew letters and be done with it? Isn't there a certain amount lost in the transliteration from Hebrew letters (which, if I remember correctly, don't indicate vowels) to Latin ones (which do)? Yikes.

Call me theist, but I've always favored the idea of a Creator intelligent enough to know when it's being talked to, no matter what name we call it. I have trouble getting terribly upset about such things, but, at the same time, I know a lot of other people take this sort of thing with a deadly seriousness that leaves me just bewildered.

Take, for instance, the Pledge of Allegiance. Granted, I dislike the actual concept of a Pledge of Allegiance; it always had the distinct odor of Heil Jackboot about it, what with requiring kids to stand up in rows in class to recite words they don't understand while staring at a flag, and all. To me, civilian acts of informed voting and governmental criticism speak more of appreciating one's citizenship than any recited pledge ever could.

- but, in the midst of that pledge, is a sticky little two-word phrase that riles up a good bit of folk, and I'm not so certain that I blame them. I like a rollicking argument over semantics as much as the next guy, but I draw the line at dropping phrases like that into laws (or on money). Cementing specific religious phrases like that one into law will do nothing but hurt those whose beliefs fall outside those whose particular version won the day.

The standard Christian response I've seen to complaints about the "under God" phrase is, "But everyone knows what the phrase means! No one should be offended by a reference to God!"

Hate to break it to them, but that phrase, no matter how trivial, is an endorsement of a religion - Christianity. If we're all talking about the same God, and it doesn't matter how it gets referred to, perhaps we Americans could change to a slightly more inclusive version of the Pledge that would alienate different religious groups on different days of the week.

(See this page, the section marked 'the stand taken', for far better thoughts on this subject than my tired brain is likely to craft tonight.)

Perhaps on Mondays we could say "under Goddess," and on Fridays "under Allah." After all, it shouldn't matter - it's just semantics, right?

Aren't the freedoms of religion and expression just ... grand?