Atlanta. Three-point-five hours of driving to get to the geek farm, where newborn goats were cuddled and cooed over, and dragon*con staff meeting was attended.

It rained. Of course.
I managed to get lost in Atlanta. Of course.
I found ricers. Of course.The dragon*con meeting led to Suzan, Misty, and I driving a bit north to make a Teavana and Crate & Barrel run (note to self: the steamer you bought will be much more useful if you actually take it out of the trunk of your car). After doing a salmon-style run for the exit, Suzan and Misty obtained caffeinated goodness and we made preparations for getting the hell out of Dodge. Or Buckhead. Or wherever that mall is.

On the way back to the geek farm (home of truly adorable baby goats), I piped up from the back of my own car: "Ok Craving time. I can either buy chocolatey goodness at the gas station when we fill up, or we make a supermarket stop on the way back and I'll buy ice cream."

There was general approvement of this idea, especially after I reminded Suzan that we both have this not-so-secret appreciation for a good cupful of mint chocolate chip ice cream.

They waited outside for me as I bought the ice cream, car idling over a set of striped lines that bore a striking resemblance to an illegal parking place. Over to my left, I saw a glint of bright orange and shrugged it off. Bright colors like that stand out on misty nights in parking lots. I'm accustomed to that.

I tossed the ice cream in the back seat, and we prepared to be off. But I looked left, just in case. I saw more orange, and made a split-second decision. (My friends already think I'm daft; all I can do now is confirm their suspicions.) "Suzan - pull in this aisle - I think there's..."

It is very, very possible that I did a little jig out in the parking lot. "Likely" is probably a better word. It is, however, hard to hold a camera steady while you're trying not to fall over laughing. Falling over laughing when you're trying to take flashless photos at night is generally not a good idea.

** We now pause for a fifteen-minute kitty petting break **

There were three of them, parked together near the Blockbuster. In the middle was the least egregious of the lot, Mr. Blue, whose hood was inexplicably white. There's really very little to say about it, except to point out that for some reason the vents on the hood reminded me of nostrils. That, and the clashing Rice Rice Baby Yellow made my eyes bleed.

Luckily for you, I can shoot photos even while my eyes bleed. (You'll understand why when I get to truck number three.)

Truck number two was a bit more egregious, but had bits of cool scattered here and there. Custom wheels, of course, with that special aerodynamic design that makes you think of more geometric shapes blurred by the illusion of speed. Covered back, standard ho-hum flame job. A bit of a body kit, and the parts of the dash that were yellow on the first truck are a more muted and appealing grey in this one.

But honey, oh, honey, these puppies ain't got nothing on the mamma-mia of a monstrosity that was off to the right.

According to the back, this is done by Mezmerizing Miniz. Personally, I couldn't give a tinker's damn who did it as long as they just make the pain stop. You have to admit, though, even though you can see the general lack of ground clearance, it doesn't look like much from the back. Doesn't look like anything that could make my eyes bleed from across the parking lot.

Look again, and see it in all its flaming glory: 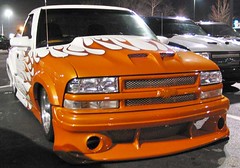 Marvel at the hints of orange in its interior. If you can tear your eyes away from that, allow yourself to be transfixed by the low-profile, custom wheels:

After that, stare at the driver's side again and marvel at the two-inch (max) ground clearance:

Now stare at it again:

Hurts, doesn't it? Is this a body kit, or a cow-catcher? Does it come with an automatic roadkill-eating device? Flamethrowers in those little recessed areas to obliterate any stray road debris that might damage the obviously-expensive paint job? Little levitators to handle noxious mundane issues like speed bumps?

Somewhere out there, someone is really, really proud of this truck. That's what scares me the most.

On 18 Mar 2003, gfmorris said...
Yeah. That scares me, too.
On 18 Mar 2003, heather said...
I wish I could get a photo of the Jesus truck that lives in Jen's parking lot. Damn. Apropos of Teavana, they just opened a store at one of the big malls in Tyson's Corner, VA. We discovered it when the parents were in town; Mom and I had a fit and bought a whackload of tea. The guy that helped us was extremely amused that I had frequented the Buckhead store.
On 18 Mar 2003, Tialessa said...
Holy Mary, Mother of God! What were they thinking (and how much paint has it left on speed bumps)??? I so wish I could have joined you - it figures that I feel like crap all weekend & fine during the work week *sigh*
On 19 Mar 2003, starlady said...
Wow. This may be your best yet. *G* you know, there could be a market for a book of these photos. Hell, we carry a book called 'Bad Hair' which is nothing but photos of terrible hairstyles. ;)
On 19 Mar 2003, Rebecca said...
Boys and there trucks. Ok girls can come too! I like the orange truck best. I have an orange car too. No flames though. hehehe :D
On 20 Oct 2003, Christy Gray said...
Dont Be Jealous.................. (That ones for you Tim)
On 9 Feb 2004, Wade said...
yea i just like to say that im apart of the mezmerizing miniz, and that you just don't understand that different people have different stuff they like to spend thier money on. We like spending money on our trucks, it's something we like to do. just like how u spend all your money on star wars stuff, and dress up like elfs. people have different taste and different way they like to spend thier money. but think about this, what do u think other people are go to like and respect more and people who customize car and trucks or people who drees up like elfs. there has always been custom a cars and truck. There is no such thinks as ELFS.