I will have more coherent thoughts on this subject later, but I wanted to share this photo with the world sooner, rather than later. This is a real billboard. It is currently in place near the junction of I-565 and Memorial Parkway. Kat and Sean spotted it first, and told us about it last night. I'd planned to wait a few days to photograph it, but when Jeff and I went for lunch today, we saw a camera crew from a local TV station taking footage of the sign. I wouldn't be surprised if the billboard doesn't stay up too long after the news stations start talking about it, so I decided to come home, grab my camera, and take a few shots of it while it was still up. I have the original photos. If you feel the need to make this billboard your computer wallpaper, drop me a line and I'll make it available to you. 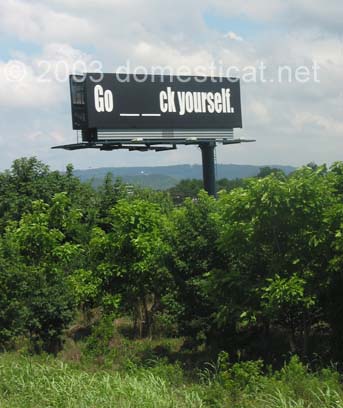 On 5 Jul 2003, Noah said...
Crudest, silliest and most juvenile billboard ever, yes, it's certainly that. *high-minded sniff* (...er, and okay, yes, dammit, funniest too.)
On 5 Jul 2003, domesticat said...
You forgot jaw-dropping. I desperately want to know who did this, and why. I'm not sure if I want to tell them that they're being brats or if I want to congratulate them for turning Huntsville on its ear. Perhaps both?
On 5 Jul 2003, Doc said...
Oh how funny. I'm sure it wont last long, or maybe that was the point. Next week or so someone will replace the blanks with the rest of the ad or something.
On 5 Jul 2003, jeffie said...
Actually, I'm betting that early next week it will be all over the local media, and the resulting community outrage will be deafening. I bet it's down in a week due to pressure on the billboard company. Remember...we're talking about the city that has citizens who got up in arms about those smut Mark Twain books being in the school libraries. Actually, I think it's a cheap and tasteless stunt. However, the typical backlash to stuff like this around here is even worse.
On 5 Jul 2003, domesticat said...
I should also mention that Sarah has a great guess about what this billboard might be. A potential solution is that it's done by a Clear Channel station, and that the blanks will be resolved so that the phrase reads "Go Rock Yourself." That's the kind of stunt a radio station would pull. We'll see. :D
On 5 Jul 2003, gfmorris said...
Amy, if you're thinking this is 95.1's doing ... while it is a white-lettering-on-black-sign deal, it's not their lettering style. While they might be brash enough to do that, I think they know the community well enough not to do it. So I still think it's someone fighting back against the "We need to talk. --God" signs.
On 5 Jul 2003, Inigo Montoya said...
Had one of the guys on the honda tech board say that it would be great as an ad for a sex shop dealing in self pleasuring items.
On 5 Jul 2003, Kevin said...
I thought it was a Calvin Klein ad, but I guess not. There aren't any half naked men, for one thing.
On 5 Jul 2003, jowilson said...
My first thought was and still is that if they were thinking about filling in blanks with something else that those blanks are way too big for single letters. My theory is that it's either a disgruntled billboard sign worker, or they'll fill it in with "Go <word> &lta few letters>ck yourself"
On 7 Jul 2003, Tialessa said...
Whoever did it it's HILARIOUS.... I doubt my Mom knows what the blank letters would be ;)
On 7 Jul 2003, Ken B said...
Yes, PLEASE send this pic to me. I was going to take a pic of it myself, but I'm always busy. Seeing it for the first time was awesome.
On 7 Jul 2003, Allison said...
I think it is an ad for the cats... "Go puck yourself." Seems like something the catfish would do.
On 7 Jul 2003, gfmorris said...
Yeah, that's about Cherney's level of ... intelligence? I hadn't thought of that. Shame on me.
On 9 Jul 2003, boredelf said...
They had to change it. The picture of the new one was in yesterday's paper. That's the link to the article. But yeah, now there's red scrawling in the first to blanks. It now says Rock yourself or something. I forgot and threw that paper away this morning...
On 9 Jul 2003, Tialessa said...
Okay, well in the article Jessica linked it mentioned the 95.1 logo was on the original billboard - looked at the pic Amy took again & NO LOGO.... I still like the pic
On 9 Jul 2003, gfmorris said...
So, I'm guessing it was Rocket 95.1, eh? ;)
On 9 Jul 2003, boredelf said...
I was thinking the same thing about the logo when I read that, Danielle. I don't see it either. Unless that's what the period is! ;) Uh.. yeah.. The logo is on the new one, and it is obvious.