I rolled out of bed with the immediate, sinking feeling that I had not gotten enough sleep, and that I would spend the rest of the day attempting to compensate for the dull, staring tiredness muffling my thought processes. I made my way through the day with a plodding effectiveness, finally giving up and catching a nap in late afternoon. It would be another late, late night, and another gamble.

I regularly check pollstar for updates on what concerts are happening within driving range. In the time that I've been using pollstar, I've quickly learned that WorkPlay Theatre, down in Birmingham, hosts artists whose music is more closely aligned to my tastes than any other venue within driving distance of Huntsville.

After seeing a couple of shows there, I've become willing to gamble on unknown artists at WorkPlay, simply because I know that the acoustics are always going to be top-notch, the parking free and plentiful, and the service uniformly helpful. At a typical cost of $15 per show, it's worthwhile.

When I checked in the afternoon, seats were available, and I decided to just purchase my ticket at the venue instead of digging out my wallet and buying it online. When I got to the venue, late and hustling due to the exit ramp I needed off of I-65 being closed, I slipped inside, had my $20 ready to go, and got in line.

"Sorry. We're sold out. We sold out at three this afternoon."

Oh, hell, and I just drove an hour and a half for this. "Anything I can do?"

The security guy at the door shrugged. "Hang out. Wait. See if anyone gives up their ticket or just can't make it. Sometimes it happens." He looked down at my shirt; I was wearing my 2002 "Tek" shirt from dragon*con tech staff. "You worked this sort of thing before?"

I explained. I stood by the bathroom, out of the way. We chatted. It passed the time. I mentally did calculations in my head; if WorkPlay could hold about 300 people, which I thought was about the right number, even with a 99% ticket pickup rate, that meant around three tickets should come open.

Right at 9:00, the security guard looked back at the woman running the ticket booth. She held up one finger. He turned to me, smiled, and said, "Hold out your arm." My mind was elsewhere; I held up my right arm without thinking, and before I realized what was happening, he slapped a wristband on my arm and told me to enjoy the show.

"One ticket came open. It's yours." I made to walk to the counter and pay for the ticket, and he shook his head. "It was already paid for, and someone couldn't make it. It's your ticket now."

I don't look gift concerts in the mouth. I walked in and tried to find a seat. There was none; the floor, the first tier, and the second tier were all packed. I stood by the entrance to the kitchen area, and waited, listening to the opening band. Decent, I thought. As song slipped to song, I revised my opinion to "pretty decent," then to "pretty good," and then to "probably one of the better openers I've ever heard."

I flipped a big mental bird in the direction of Tuscaloosa; as usual, the sound in WorkPlay was near picture-perfect. Loud enough to absorb you in the music, quiet enough that in-table conversations could be had, if necessary, but not loud enough to create distortion.

I love this place. Music should be like this: seating that's close, but still comfortable, with drinks available and a competent soundboard making sure that what's coming out of the speakers is as good as what's coming in.

Eventually, I spotted an unused chair at a nearby table. Between songs, I asked the other people sitting in the table if the chair was free, and if so, could I use it? They agreed, and maneuvered appropriately to pass me the chair. I took it, sat down next to the entrance to the kitchen, and waited. As the opening act continued, I watched the other attendees subtly jockeying for better position, and soon enough, a seat opened up at a table with a good view. A couple of songs later, with no one else attempting to move into that slot, I introduced myself and asked if I might take up the spare space at the table. 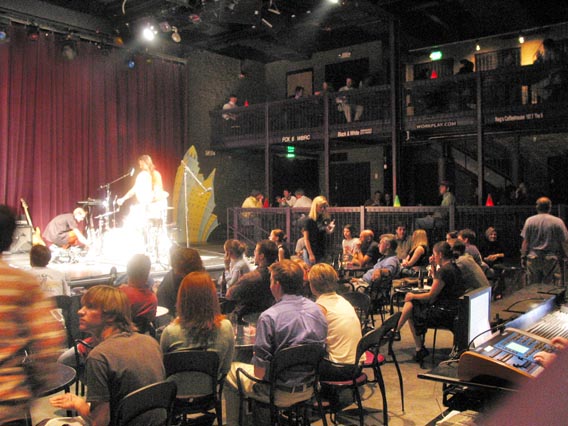 They agreed, and I moved away from the kitchen and into a seat which, like virtually every other at WorkPlay, had an unfettered view of the stage.

I knew little about Damien Rice, except that Colter recommended him with a fervor and absolute conviction that I don't often hear from him. I know Colter's taste, and I trust it; if I didn't, I wouldn't have driven an hour and a half to gamble on an unknown artist.

His cellist, Vyvienne, tiptoed out first, shy and blonde in a white shift and shoes. When the audience began to applaud, she ducked her head and motioned for them to sssssssssssh! They did - until the other band members came out on stage. 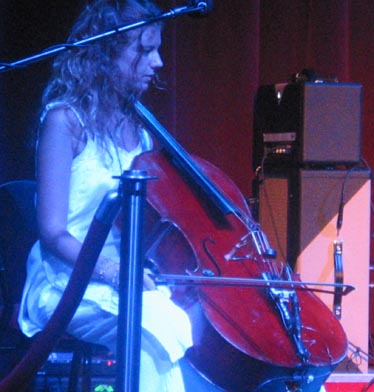 This stranger, this Damien Rice, was slender and small, with that gently-reddish complexion and hair, and diffident demeanor, that immediately reminded me of Colter in his more shy moments. He welcomed everyone and began to play, with little predication or pronouncement. The show was on, and it was time to get down to business.

He apologized after the end of the second song, because he'd broken a string on his guitar. He did not have another, and turned to Vyvienne. "Vyvienne, would you please entertain the crowd for a moment while I re-string my guitar ?"

A shy smile back to him, a quick glance at the crowd, and then a longer glance at her cello. She proceeded to stomp through a mean, sultry version of "Smoke On The Water" to the cheers and screams of the crowd. The shyness ended where the cello began, apparently. He finished stringing his guitar and they all joined in, turning a little bit of showing-off into a full-throated stomp and howl.

It was right about then that I began to suspect that I might be in for something special, a suspicion that grew, slow and quiet and small, from song to song. They apologized to the crowd for departing so much from album versions of songs, explaining that after playing these songs on an almost-daily basis, they were in the mood for experimentation.

"Hallelujah" came in the prayerful whisper of Leonard Cohen, with only the slightest hint of Jeff Buckley, and after it, the show was never quite the same. All I know to say is this: the lion, previously sleeping, previously silent, roared, and the audience sat there in stunned silence and devoured each moment as it was handed to them.

Previously quiet, he began to work with loops, echoing and repeating over himself and his fellow players, layering sound on sound until it was too much to handle, then bringing it back down to a whisper. You could almost hear the smoke slowly curling up from behind the drumkit. 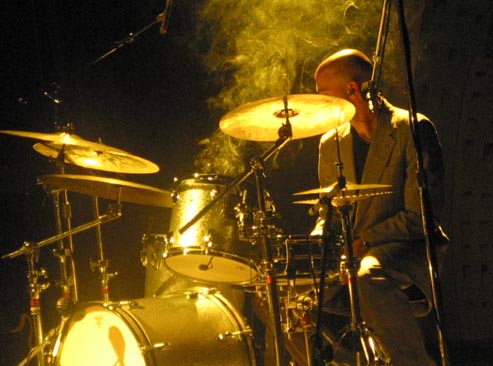 About halfway through the show, I realized what I was seeing. There are two different ways to interpret the word 'performance'; the first implies a simple recitation of a memorized work, and the second implies a live artistic expression. This guy was not just performing, in the latter sense of the word, he was brilliant.

It's rare to see something so breathtaking, and even rarer to recognize the fleeting breath of genius when it whispers in your ear. I put down my camera, draped my chin over the retaining wall in front of me, and listened, constantly fighting the urge to concentrate by closing my eyes. I could listen anytime I wanted, at home, but this was my only chance to see.

I watched, and drank it all in, him getting frustrated with being unable to control loop pedals fast enough with his feet, forcing him to drop to the floor, dragging the microphone with him, alternating between hitting the loop pedals with his hands and strumming over them in a mad dance that left the audience breathless but screaming. 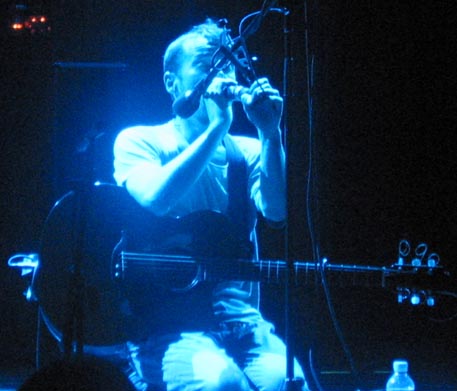 By the encore, people were standing up, intending to clap, and getting lost in the music and forgetting to.

By the time they left the stage and the house lights came up, they had sweat streaming down their faces and the audience was screaming, shouting, stomping, beating on the tables and anything that would stay still. The lion had roared, and now the audience roared back in measure.

I sat at the table, silent, stunned.

Afterwards, I walked out to wait for signatures. I ran into the same security guy who had let me into the show. I thanked him, and we talked acoustics and music and the beauty of the unknown artist, and he told me about the history of WorkPlay. I wasn't alone in my esteem of the acoustics; the sound system had been designed first and the venue built around it, he said. There were tiers of speakers, aimed at different sections of the room, intended to ensure that every person in the room, no matter their seat, got the same sonic experience.

"Most folk won't realize that," he said. "They'll just know it was good."

When Damien Rice came out to sign and shake hands, I was shocked at his appearance. Slender, small. Shy, even, with effusive thanks for anyone who got over their bashfulness at meeting The Performer and approached him.

There were so many questions I wanted to ask. How did this roar come from you? Where does it go when you're done with it? How do you channel and control something that strong?

Instead, I asked for three signatures, thanked him, and drove home flabbergasted by what I had seen. It would have been magnificent even if I had paid $15 to get in, but to sneak in fortunate and free made it something even more special.

Day three would be the Steely Dan show. I suspected it would be difficult to top day two, but I was willing to wait and see.

On 24 Sep 2003, Tialessa said...
That sounds like such a FABULOUS show! Nice security guards!
On 24 Sep 2003, gfmorris said...
I have had friends who have tried to beat it in me to listen to Rice. I might submit. ;) As for the venue ... I've not been there, but visually, it makes me think of the Exit/In. I love that place, even if I usually end up standing against a wall.