(Photo links to the full photoset) 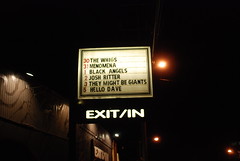 Sign outside
at , Nashville, Tennessee, United States by domesticat. 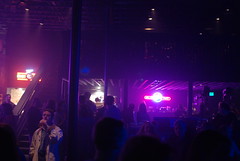 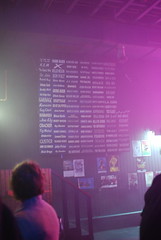 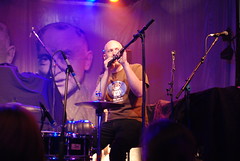 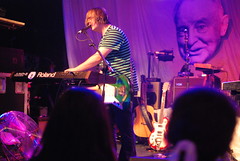 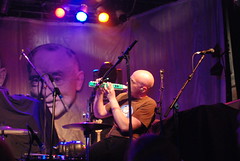 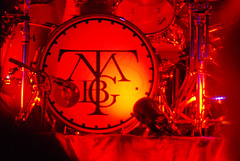 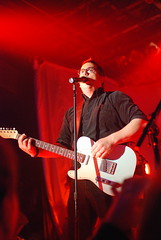 Leading this mob...
at , Nashville, Tennessee, United States by domesticat. 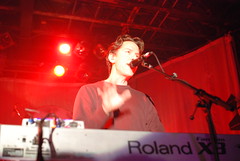 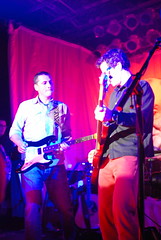 The Other Guys
at , Nashville, Tennessee, United States by domesticat.
10 out of 17 on Flickr

I survived the TMBG concert at Exit/In last night, and let me tell you, it was an experience.

To the idiot named Kimberly in front of me: Lady, and I use that term in the pejorative sense, you suck. Yes, you got there early enough to be front row, center stage, but I hate to break it to you (actually, I don't, I take great pleasure in doing so) but screaming "BIRDHOUSE IN YOUR SOUL!" at the end of every song isn't gonna make the band play your favorite song.

Even if it's to shut you up.

Secondly? You stink at taking photos. How do I know? The three people unlucky enough to be stuck behind you got to watch your camera's LCD screen for most of the concert, and we marveled at your inability to stop jumping up and down long enough to take a photo. (Actually, we didn't so much marvel as we openly laughed at you and mocked you between songs.) I can guarantee you that your photos sucked, because I saw the freeze-frame version of nearly every photo you took. Your photos of John Linnell were aimed low enough that you cut his head off most of the time, and the few that you managed to get his head AND torso into were aimed low enough that your flash reflected off of his keyboard.

Those of us whose view you blocked through your incessant flash-firing took great pleasure when, about halfway through the show, John Flansburgh commented to the crowd that it was like facing Japanese paparazzi. Know why he was saying it? You. You were blinding both Johns from the moment they got on stage. I believe you DO know why he said it, because I noticed you put your camera down for a while afterward. Shortly afterward, I was able to start getting decent shots.

Had you been even remotely polite to anyone around you, I'd cut you some slack. However, since you weren't, let me enlighten you on some basic concert etiquette. First, if you're on the front row, be prepared to stand at a slant so more people can get the coveted first-row experience. If they're doing it, and you start shoulder-checking people so that you can stand straight on, don't be surprised if they don't move. Hint: THEY DON'T LIKE YOU.

Next: if you are in a packed general-admission arena, don't just think twice before you start jumping up and down, think about six times. Then, after those six times, turn around to see if the people behind you have camera equipment (by the way, since you didn't look, we did). If space is tight enough that you have to say "Excuse me" more than five times to get to the bathroom, and no one else feels the need to do some House-of-Pain style jumping around, you are probably going to jump on people's feet and slam elbows into cameras.

Yes, those were my feet you jumped on. Did my left elbow hurt when I hit you with it? Good. It was intentional. You damn near took out a Nikon D80 with your drunken antics -- a camera that, I might add, I was being very protective of, was not waving anywhere near you, and which everyone else but you had zero problems avoiding.

You might wonder how I know your name? It's because you had a friend about three people back from me who kept screaming your name for most of the show. Every time it got quiet, you thought of something you HAD to say to him, so you reached through multiple people, hauled him up to the front, told him something, and then he had to elbow his way back to his place. Either stand with your friend or shut your mouth until the end of the show.

I have never been so glad to see a band take an audience member to task before. John Flansburgh gets major style points for finding a way to deal with you politely when either he or John Linnell would have been completely justified in just taking your camera away from you for the duration of the show.

So how was the show? Actually? Surprisingly good. It was my first TMBG show, and I'd consider attending another. Getting a foam finger tossed at me was a highlight -- and a great souvenir. (I sense it's the newest decoration for my desk.) I got a kick out of watching thirtysomethings reliving their college years; these people would sing along to anything, the more nonsensical the better. Sung encyclopedia entries about the sun? Squee! On-key alphabetical recitations of the countries of the world? SQUEE! Anything from Flood? SQUEEEEEEEEEE!

I can only describe it as surreal. I'll also say that I'm genuinely surprised by the evolution of the band. As the years have gone on, they've evolved into impressively versatile musicians. Somewhere along the way, the novelty of TMBG morphed into good kids' music and then, in a direction I wouldn't have guessed, a credible rock band. It wasn't all witty wordplay and novelty sounds; these guys could just plain rock.

I was impressed. Anything less probably would have been ruined by darling Kimberly, she of the green shirt and Chinese-character neck tattoo.

(Oh, and the part that really messed with my head? Brad, do you realize how much you look like John Linnell? It was a little creepy at times...)

Anyhow -- enjoy the photos. This is about a fifth of what I shot last night. I usually get a much better signal-to-noise ratio, but Kimberly's camera partially blocked well over half my shots. I managed to minimize her in this one, but this is one of my favorites: 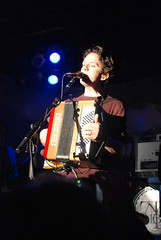 On 4 Nov 2007, katre said...
We saw them a few weeks ago. They did a sunday kid's show, so F and I took Z to go see it, and a good time was had by all. But sadly, the only pictures I took were of Z. I've seen them a lot in the past, and I'm always really impressed by their versatility. One year, they did five shows in a month in November at the Bowery Ballroom (even on Thanksgiving). I went to them all! One was their ordinary geek rock show, one was featuring a brass band that backed them up on all the numbers, one was a kid's show, one featured a bunch of musical guests, and I forget what they did the last week, but it was just great that they could do five shows in a row and do something different every week.

The show itself I enjoyed, but sadly I think this was the show to break all shows for me. The first bad nudge was from Ticketmaster, who on top of their $6 service charge, also charged an additional $2.50 for a delivery fee... for a ticket I printed out on my printer... I've always hated Ticketmaster, so that's honestly something I could get over.

What I can't seem to put behind me is this new trend in live music that the show should not start until 2 hours after the doors open (and that's just the opening band). By the time TMBG took the stage last night I was already ready to start driving home so I could get some sleep.

The show woke me up and invigorated me, and I'm really glad I went. But I really think that's going to be it for me. That being said, I'm really happy I got them in before I quit :)

On 5 Nov 2007, colter said...
sorry your virgin TMBG experience was so sullied by such a churlish nit. i've seen them twice and both times they were exuberantly electromagnetic. there are so few bands that have legitimate fun with their shows, and they're about the closest you can get to Frank Zappa's blend of zaniness and musical expertise.