Even I got THAT hint

Dateline: New Westminster, BC.
(Note to self: Go see the old one sometime.)

As I've retold this story countless times in the time since I've returned, I figured the least I could do is share it here as well. I suspect it loses some of its boozy, imperative nature when committed to the written word, though; I think it's probably far funnier in person.

A cultural difference worth knowing: I was raised to hear pretty words, but not to take all of them at face value. An invitation to come stay with someone, if not repeated or mentioned again, was very likely someone just being polite -- not something to be acted upon. It turns out this is not true of everyone: some people issue an invitation only once, really hoping you'll take them up on it, and then shut up if you don't act on it. Ah, North versus South, are there any gaffes this cultural divide can't inspire?

Several drinks into the night, I was remembering exactly why Brad and I always got along so well, and marveling at how much in common Alice and Melly and I seemed to have, when Alice crooked her finger at me over her Mug Of Tasty Beverage and said, "Come back to the back. We need to talk."

I thought, "Oh, boy. I don't know what I've done, but clearly I've done something wrong here." When an outspoken woman with a drink in her hand and deelyboppers on her head tells you to do something, you do it; obedient, I followed her to Melly's bedroom for A Chat. 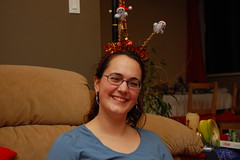 Most of the conversation—well, that's suitable for a private entry really—is probably best not repeated. The part worth retelling, though, was when Alice set down her drink, leaned over to me, stared me straight in the eye, and said slowly, deliberately, and very emphatically:

"Amy, we have not seen you in about five years."
(Pause.)

"WE HAVE A GUEST ROOM."
(A pause with a very direct stare.)

"Do you understand me?"
(Followed by a very impish grin.)

Shortly after coming home, I said to Jeff, "I think we should go to Hawaii for our birthdays this year."

See? I can be taught.

Tehehehee I wondered what was going on in my bedroom :-)

Well I don't live in Hawaii, and my sister is taking over my guest room, and we haven't known each other for 5 years... but.... I've got lots of rain, lots of booze, and a blow up bed.

"See? I can be taught."
*Hesisting the urge to make the old dog/new tricks comment*

Fear not, for we shall be back this summer, as evidenced by the flurry of phone calls lately trying to schedule our northwestern rampage this summer.

Hmm. The trip needs a name.

Northwestern Rampage it is, until someone comes up with a better name.