If you haven't seen the Library of Congress' exhibit 'The Empire That Was Russia'—The Prokudin-Gorskii Photographic Record Revealed, then you should take the time to look at it.

Before you do, though, read up on the process. A short summary: a photographer travelled around Russia in the 1910s ('nineteen-teens' if you're my grandmother), photographing everything from royalty to commoners to landscapes to architecture.The incredible thing is the medium he used—a camera with three filters, which provided him three photographic plates. One red, one green, one blue. He apparently had a stereoscope-like contraption that allowed him to project his images back together into one color photograph for others to view.

The Library of Congress arranged to have these plates scanned and digitally recombined. The results are worth every superlative you can heap upon them—magnificent, colorful, stunning, beautiful, awe-inspiring.

The adjective I have to add at the end is "thought-provoking." Once, there were people who believed that allowing oneself to be photographed meant that one gave up part of one's soul to the picture. While I've never felt that to be true, I can't deny that I have seen pictures that left me feeling that they displayed more of the subject's mind and soul than they did their corporeal body.

There was a post on /. regarding these pictures that summed some of my feelings about these pictures. When looking at them, those of us raised in the era of so-real-you-can-eat-it commercials and movies try to drag our eyes just off-camera, to try to find the place where the set ends and the movie studio begins. Or to find where the lights are being aimed from, or to figure out how they got those colors as bright as they are.

Now. Take that, and add this thought. Think back to daguerrotypes, early plate-based photography. All greyscale. Try to look into the picture, and to imagine the colors that must have been in the real room when the photograph was made.

Picture Abraham Lincoln wearing a red carnation. Focus on the carnation—imagine it in his buttonhole. Change it to pink. To white. That's not difficult; you've seen pink and white and red carnations before. Now, look up. Look at the person, not the flower. Try to picture him as a person, with flesh tones, with hair color.

It is difficult. It is humanizing. It changes him from 'the subject of an old photograph' to 'a real person.'

I think that is why I found these pictures so disturbing. Most of all this picture and this one.

The first photo is of a man who died in 1911—who died ninety years ago!—and the colors are such that my mind automatically associates it with a new picture, taken within the past year or two. The second, of three girls photographed in 1909—girls who held memories of another century long gone.

The girl in the middle stares, almost defiantly, at the camera. Ten years after this picture was taken, she probably had a stunningly beautiful face; she shows the harbingers of it in this picture. She's not pleased at having to stand still for this picture, and all three of them look as if they'd be happier to fling those plates of berries at the photographer instead of standing still for some silly photograph contraption.

Yet—so young, so full of life…and so many years gone. All three of them, undoubtedly, dead now. Dead for many, many years, despite the fact that this photograph looks as though it were taken yesterday. I half expect to see another photo of them removing their costumes and going off to a wrap party at the end of the shoot. But it isn't true. When the photographer went away, these girls went on to live their lives: daughters, sisters, mothers, grandmothers—who knows?—all without the uncompromising eye of the camera to give us the rest of the story.

They are undoubtedly gone, except in the memories of people still living today, but it's difficult to make that realization mesh with a picture whose colors and vividity make it seem that it was shot in my lifetime.

For comparison, examine shots of me at age 16 months and 26 months. These pictures, approximately 23 and 22 years old, respectively, already look older than these old pictures due to fading and discoloration. (I have, however, retouched them a bit to help matters out. Yep, I had some serious blond curls when I was a larva…) 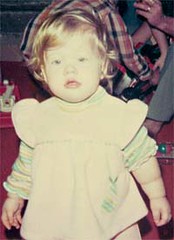 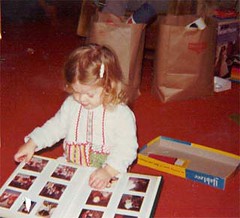 How many years, I wonder, will it be before someone looks at these pictures of me and wonders who that person was, what her life was like, and who she cared about? At some point in time, past my time to witness and comment, it will happen.

Lastly, some odds & ends—
I changed the menu text to incorporate a new section called /etc. It's as the name implies: a couple of things that just didn't fit anywhere else but needed to be linked. Still trying to puzzle out why Netscape 4.7x hates my stylesheets. ALso, a lot of behind-the-scenes file-cleaning that you'll never notice, but I knew I needed to do. Cheers, and carry on.