As I crossed the state line I realized I'd missed the grand turning-out of the lights, the unknown but somehow pre-determined moment when all of the good citizens of Alabama realize it's time to go to bed, and turn out all the lights. There hadn't been many lights in Tennessee, but in comparison, Alabama was utterly dark. I took the state line exit onto the back roads, and did not see another car (or an open gas station) for the rest of the drive. It is difficult to tiptoe into a sleeping house while excited; excitement leads to bouncing, and bouncing while on tiptoe generally leads to Bad Things happening. It took well over an hour to calm down enough to even think of sleep.

Before leaving, I had hurriedly showered and braided my hair, planning to arrive at the venue an hour ahead of time in the hopes of procuring a good seat. Two hours later, after an exquisitely fast freeway drive and little difficulty finding the venue, I began to suspect that there might be a problem getting a good seat.

There was no parking. No parking generally means lots of people. Lots of people == few seats left.

Cars had filled the bar's lot, the lot across the street, and were illegally parked on both sides of the street both before and after the bar. I turned the corner and drove further down; there were Sunday-open business-owners placing boxes in front of their businesses to prevent the voracious parkers from gobbling their spaces entire.

I parked in front of what appeared to be a copy center, in one of those possibly-legal spaces that reminded me all too much of that Cowboy Mouth concert in which we piled out after a highly-successful Concert Experience to learn that Heather's car had been towed by the parking gremlins.

I took the space, called my spouse, and hoped that my car would be there when I got back in a few hours. I jammed the holy concert trinity in my pockets (sharpie, CD covers, wallet) and hooked my keys onto my belt loop - and walked into bedlam, the ticket-taker screaming "What's your NAME?" over the din, and me wishing I could hit him. Even after he saw my name printed out, he appeared to have no comprehension whatsoever that a hyphenated last name is alphabetized just like any other English surname - by the first letter.

- and I threaded my way through the crowd and said to myself, "Oh, crap, where am I going to sit?"

It took me a few minutes, and fadingly-hopeful tries, to realize that the answer was "nowhere." I had arrived an hour early to a crowd that was already somewhere between standing-room-only and fire-code-capacity, and the only place I could stake out was a snug little spot behind a table of quiet talkers and in front of the sound board.

The first hour of the show was broadcast by a local radio station. The worshipful (and progressively more tipsy) fans at the front table bought Jack O'Neill more tequila shots than he could drink, after his rendition of Simon and Garfunkel's "Cecilia" was reworked into a ditty honoring the liquor.

I bounced up and down on my toes, only partially because my feet were tiring from standing on the concrete. Nobody saw. In a roomful of screaming and delighted longtime fans, the woman who does nothing but smile, bounce a little, and occasionally take photos goes virtually unnoticed.

A man in a band shirt came out periodically, giving Cary and Jack cues to how much time was remaining in the broadcast. (Remember him, he shows up again later.) They reassured those of us sitting in the bar that they were going to continue to play, even after the radio program went off the air. 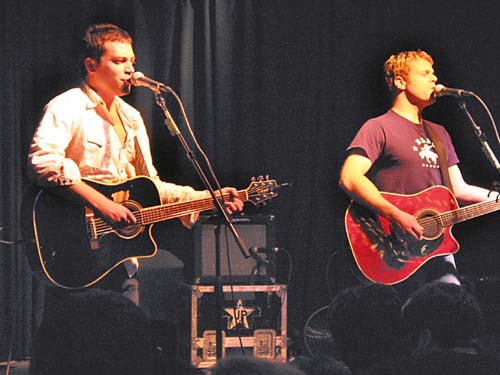 In the far corner, the grizzled man with a microphone thanked the sponsors, introduced Cary and Jack one last time, and motioned with his hands to get one last cheer out of us. He tucked the microphone below his lower lip and said, "....and, we're out."

Jack leaned into his microphone and said, "We off the air?"

The audience started howling with laughter. "You have no idea how hard it's been keeping that word in for the past hour!" I was howling with everyone else in the bar, but I was the only one whose mind was whispering "don't fall onto the sound board!" while she was doing it, though.

From Andrew: "I'm about to burst with wondering...how was the concert?!?!?!?" (Punctuation is his) It was a show, really. 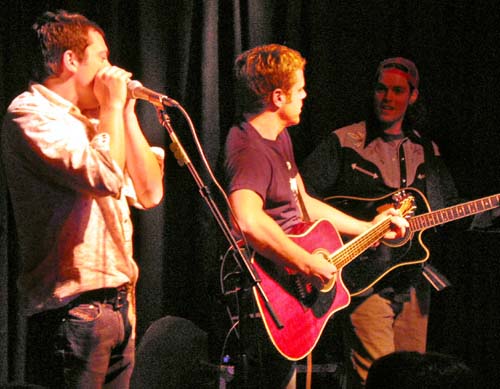 With a couple of deletions and additions, they essentially played the first disc of their compilation album Decade, except that somewhere in the middle, Jack O'Neill demonstrated his Neil Diamond impression (you haven't lived until you've seen an entire bar howling along with "Sweet Caroline" while the frontman turns into half Elvis, half Neil Diamond) and Cary Pierce and friend (remember him?) managed to prove that, yes, 'Three of Us In A Boat' really can be merged with 'La Bamba' quite seamlessly, thankyouverymuch. 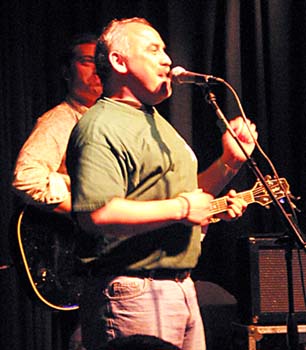 We interrupt this concert story to make a note about how fast telemarketers get really pissy when you say, "I see you're calling from 727-489-0124, yet you say you're in Huntsville. How interesting." Not to mention how fast they hang up before you can finish saying "By the way, we don't take solicitations over the ph-" -click- Right. Back to the story.

It was a good show, Andrew - I wish you and Monica could have known how many times I wished we were all sitting in one of the front tables together. Instead, it was just me, in rasta hat and braids, standing by the sound board and convincing myself that no, calling you during the concert and holding the phone up to the speaker would have been cruelly taunting you...

I did something unusual after the show: I got CD covers signed...for me. Yes, silly goofy me swallowed her pride and got over the icky fangirl feeling of asking for an autograph and photo, and just...asked. 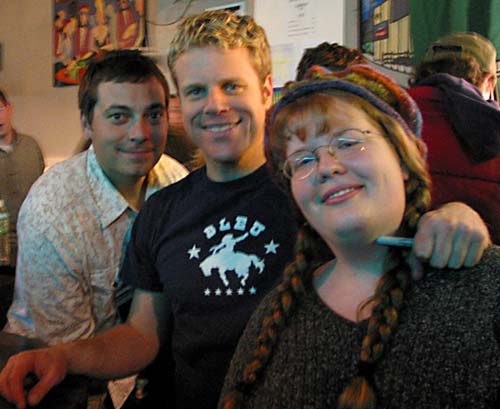 If it's any consolation, Andrew, the guys were just as nice as they were five years ago. They were, however, both inordinately fascinated with the braids and the hat. There's something about a multicolored rasta hat and a couple of braids that seems to serve as an instant icebreaker. Quite wacky.

I drove home - singing. Happy, even.

While I was waiting in the crush of folk after the show, I overheard one of them (Cary, I think) saying that they were trying to get a show in Atlanta. If so, I think I might have to ratchet up the fangirl goofiness and see another show - and this time, beat my friends until they actually go this time. If there even is a next time.

On 11 Mar 2003, Monica said...
Amy, you lucky girl!!! The pictures are great, and you were right about calling during the show being extremely cruel. To make this an even more special week, let me wish you a happy Ruben Studdard day as the governor of AL declared it for the goofy American Idol contestant!!! How are you celebrating???
On 26 Apr 2003, Jill said...
I see your comment about 727-489-0124. Do you have any idea who the listing is with? They call my house too, & I want them to stop. It does an auto hang up whenever I get to pick it up. Bothers all of us. Thanks