Five-thirty.  The needle of my speedometer was arguing with the signs on the side of the road; the needle argued sixty and the sign argued fifty-five.  The needle won, as it usually does.

Forty minutes later I was slaloming through some of the better curves between Huntsville and Nashville, forty-three miles south of Nashville and tracking north a little faster than was legally allowed. My brain had momentarily shifted out of autopilot. Had I put all the John Sayles DVDs in my netflix queue? Did I feed the cats before I left? (Yes.) Locked the door? Remembered to put the memory card back into the camera?

When the curves passed, monotony returned.  The hills were unrolling themselves in the direction of Nashville, slopes flattening and gentling with each passing mile.  Cows spotted the landscape, eagerly munching on grass that had only recently greened from spring rain.

I started carrying a small spiral notebook for moments like these, when life keeps me from my keyboard but the ideas continue to arrive.  One of these days I'll actually take that particular life-death-calendar-days idea off of the multiple notebook pages and actually translate it into an entry, but since it's been brewing for six months and no entry yet, I'm not holding my breath.

The story of my drive is a familiar one: a musician, a small show, and an unfamiliar venue. That night it was Vienna Teng, at a small Nashville venue named "The Basement." A Thursday night show meant that I would split my time between the company of strangers and the comfortable, familiar weights of notebook and camera.

Years after the fact, I still harbor twinges of worry whenever I attend a concert in Nashville.  My passion for indie artists mean that the shows I like are in smoky suburban dives virtually buried under a swath of one-way streets.  My first trip to Nashville for a concert show involved my getting lost three separate times, turning the wrong way down a one-way street, and being so absorbed in finding my way again that I didn't realize until long afterward that the guy trying to talk to me on the street was probably trying to panhandle me.

I come more prepared these days, with maps, phone numbers, and a better sense of the freeway system in Nashville.  Nevertheless, little venues always find a way to throw me for a loop.  For The Basement, it was the parking sign.  I pulled into the parking lot for the professional psychic so that I could stare at the sign.  She'd already gone home for the day and, after all, she was psychic.  She'd understand that I wasn't trying to steal her parking; I was just a little lost.

I read the sign aloud to myself. "Parking in alley? But I don't see an alley!"

Come to think of it, I didn't see the venue either.  After deciding to circle the block, I turned the car around just in time to block the car of another person who was trying to turn into the small parking lot I had just barricaded.  My realization of her intention came just as a swath of traffic blocked my ability to get out.

We could see each other from our cars.  I had enough time for a sorry-about-the-timing shrug and a smile exchanged between us, and I whipped out into the road.

By the time I located the alley (small) and the venue (smaller) I realized that she was behind me.  We were early - so early that the cop tending the door was far more interested in his paper than of the misadventures of two obnoxiously-early concertgoers.

She was from Cincinnati, and I was hungry.  "I haven't had dinner.  Would you like to join me?"

We ended up at Burger King, where I rediscovered once again that my blood sugar behaves infinitely better if I remember to feed myself at least once a day. We talked music, and geekdom, and journals, until waiting any longer would have made us late. A back alley or two later and we were there again, in time for the last of the sound check and the acquisition of the perfect table.

As I've delved deeper and deeper into the indie scene, I've begun to appreciate the concept of a listener's "ownership" of an artist's music.  Fiscal and physical ownership of music comes point-of-sale, but a listener's ownership of music is far more gradual.  Listened to often enough, the music begins to weave itself into the soundtrack of the listener's life.  A song that, for the artist, might be the song she wrote about her college roommate's boyfriend becomes the listener's husband's favorite song for lazy Sunday mornings.  Given time and a bit of alchemy, the original intention and meaning of the music blends with the atmosphere and tenor of the life it's woven into.  The end result is often a song whose connotations and implications add up to far more than the artist's original intent.

This ownership creates the illusion of a two-way intimacy between performer and listener.  The finished package of music, whose actual emotional depth and honesty is known only to the original performer, lands in the hands of the listener, who is free to dissect, interpret, speculate, or ignore any and all parts of it as they see fit.

The illusion of intimacy is easily shattered at an arena concert, where you and ten thousand of your friends and neighbors are straining, ears bleeding, to see what the tiny performer on the faraway stage is doing - while singing at the top of one's lungs.  Memories of arena concerts tend to have more to do with the rowdy drunks four rows up or the stage show pyrotechnics than they do with any connection between performer and listener; after all, it is the rarest of performers that can manage to truly connect with thousands of people at one time.

In comparison, tiny, intimate venues reinforce listener ownership.  It is easy for a performer, set up in a space little larger than a living room, to interact with every other person in the room. 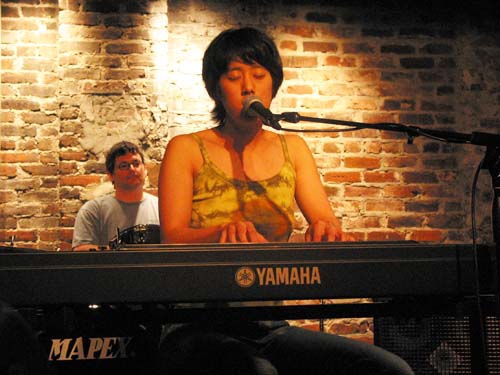 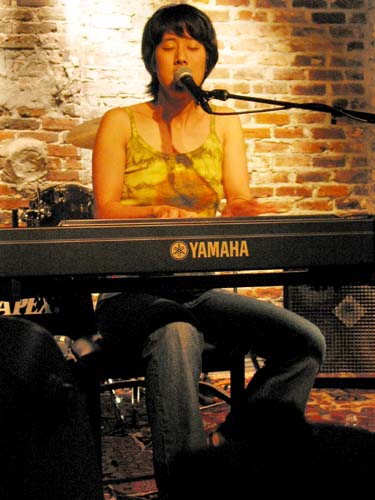 We sat, Penny and I, at the center front table. I blew out the table candle to have a makeshift tripod for my camera. Seven dollars' cover gained us each blue handstamps and permission to stay inside. We traded musical recommendations, she and I, on opposite pages of the same notebook, trading the same pen between us as we remembered names.

Between songs, the audience was virtually silent, without even the clink of glasses or idle chatter to spoil the illusion of listening to a friend play and sing in someone else's basement.  Between-song rambles competed with nothing except the quiet hum and whirr of the club's air conditioning system.

She talked of her friend never quite happily admitting that a song's lyrics were about him until after she had performed on Letterman.  She talked of tracking herself seventeen different times on one song, her fascination with call-and-response, her choice of performing without a setlist, and the problems of having no backup singer on tour.

"If I could get all of you to handle the backup portion of the song, I'll do my Celine-Dion thing over it, and it'll be good."  She ran through the backup, and we casual listeners warbled our best, and there it was - connection, crackling pure and clean from audience to performer and back again.

I drove two hours each way for that moment.  I would have driven longer, if necessary.

After buying two CDs, having them signed for Gareth and Noah, I waited until the crowd dispersed to obtain a photo or two. Once in my car and safely on the highway, I called Jeff to let him know that I was on my way home. I had no numbers to call Noah or Gareth to let them know that their CDs were signed and safely stowed in my car; the news would have to wait until tomorrow.

I pulled off at my traditional post-Nashville-show pit stop to grab juice, chips, and a bit of chocolate.  I drank the juice and unwrapped the packet as I continued the drive home, letting the needle and the road signs argue over numbers once again.  I drove south, the full moon lighting the world from my upper left, repeatedly flicking my eyes left in the hopes of remembering the breathtaking clarity of pale, clear light contrasting against the bluish-black sky against the pure black arches of the trees.

(The title for this entry comes from something Vienna Teng said during the show.  The original context is now lost to me but, at the time, I thought it was interesting or unusual enough to jot down in my notebook.)