Week Of Music #1: hello Tuscaloosa, you can bite me

Day one of the Week Of Shows involved driving to Tuscaloosa. Ah, T-town, my spouse's former stomping grounds, but never a city that I quite felt at home in.

Great Big Sea, hmm? Never seen them live, never owned an album, but I remembered the name from a mix tape Brad made for me ages and ages ago, and when I asked him about the band and if they were worth seeing, his response was succinct: "Awesome. Alice says she'll kick your ass if you don't go see them."(Hmmm. Supposedly it's in good taste to ask permission before you quote a private email, but well, we all know how much the rules apply on this site.)

The show was at an unfamiliar venue. Jupiter's? What the heck was this place? I'd never heard of it. Jeff had never heard of it. An eventual check with the Theta Tau folks down in T-town confirmed that it was just the latest incarnation of one of the bars on the Strip. I discovered they had a (terrible) website, looked them up, and said, "Oooh, they're opening for Cowboy Mouth. I like Cowboy Mouth. This should be worth the drive. I think I'll go. I'll get CDs signed for Adam and Alice, and see a new band, then do late-night round-robin phone calls on the way home and it'll just be swank."

Ever notice how all the bad ideas in life start out sounding really innocent, really good? Right. Well, in a perfect world, there would've been a big, fat klaxon shrieking its head off Right About Then, with one of those official-sounding announcements telling me that this was A Bad Idea.

After a late-afternoon phone call with my spouse, confirming that we'd manage to miss each other on his way home and my way out, I realized that I was a) later than I wanted to be, and b) significantly lower on gas than I wanted to be. Given the recent spike in gas prices, I opted to let my Cheap Bitch personality take over my brain for a moment, and drove to Sam's to gas up there.

Except that all the pumps had lines, and I was late already. I snarled and drove on.

If you leave from Huntsville and aim to end up in Tuscaloosa, you pass by many exciting exits on I-65: Dullsville, BFE Community College (Alabama Branch), and the forgettable exits to the northern and southern sides of Nowhere Interesting (population 44 and two chickens). This is manageable during daylight, when you are awake, and can tailgate behind other drivers who are also interested in driving at barely sublight speeds.

At night is a different matter, but we're not there yet. We have to get through the show first. You might want to start gritting your teeth now.

"Hey, I heard that Big Spring Jam up in Huntsville is really gonna rock this year. Think we could do a road trip up there and get really fucking drunk that weekend?" -- a statement made doubly amusing when we were allowed into the show and every one of the people involved shamefully presented IDs indicating they were under 21, thus earning enormous X marks on both hands, indicating that they would not be allowed to drink.

I had a lot of time to think about these sort of things during the wait for the show. GBS was slated to open at ten. By ten-thirty I was madly flinging text messages back and forth with Adam as I leaned against the stage, with a growing headache from the strobes and blacklights and a subtle, bubbling hatred for a bar whose employees seemed to be incapable of playing anything other than John Mellencamp. With each song, the volume became louder, and the atmosphere more shrill.

You know you're not in for a good evening when the pregame muzak is so loud and so bad you're already reaching for your earplugs.

Finally, an hour late, GBS took the stage. The wall of sound caused my head to fall off my neck. I reattached it, oriented myself toward the stage again, and began to realize that yes, they were playing instruments, and yes, they were singing, but for all that I could hear their voices, they might as well have been pantomiming.

At this point I had spent two hours in a car and one additional hour standing next to sweaty, inarticulate teenage females....to have The Ultimate Standing Space for a concert whose sound was being so badly mangled that I couldn't understand a single word that was sung.

I took photos. Taking them helped me forget that I couldn't understand anything that was being said - or sung. Luckily, most everyone around me seemed oblivious to the fact that we were listening to a show through either a) the worst equipment or b) the worst sound mix ever delivered in the state of Alabama, and I felt a little bad for being so sour. 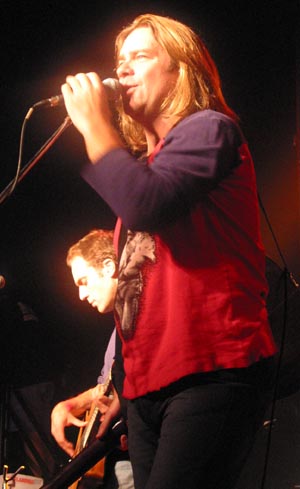 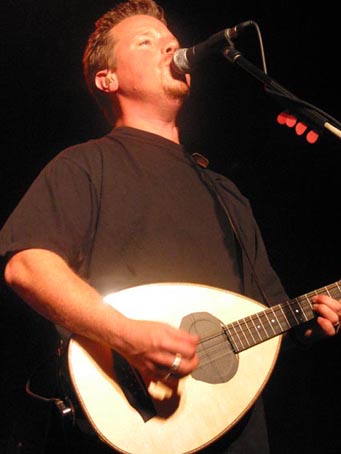 The setlist of songs I couldn't hear: 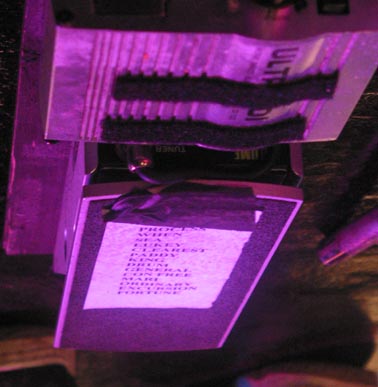 A jam that looked like a lot of fun but which I couldn't hear: 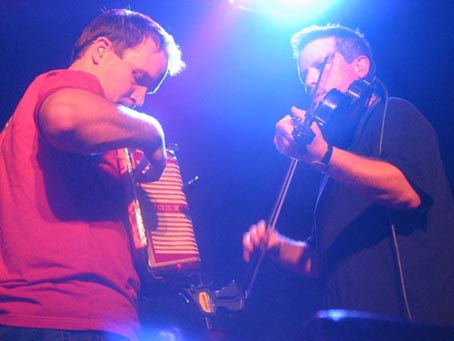 Since I could see the setlist from where I was standing, I had advance warning that the show was about to end. I realized that I had a decision to make. It was late, already midnight, and the headliner (Cowboy Mouth) had yet to play. I had a two-hour drive home on top of that. I could stick around, catch the CM show, and make it home somewhere around four a.m., or I could yank out my earplugs in disgust, get CDs signed, and get out the door and home before three a.m.

I took out my earplugs and stomped over to the merch table, where I bought two CDs. The guy behind the merch table was far more interested in talking to the collegiate chickies with bared navels, and had to have his attention diverted to me so that I could actually (gasp) purchase merchandise.

"Will the band be signing CDs?" I asked.
"Dunno." He immediately turned back to the Navel Twins.
"Is there anyone I could ask to find out?"
"Dunno." He finished his conversation with the Navel Twins. "You could hang out here, see if they do a walk-through."

I'm sitting there holding two CDs that technically don't belong to me, and I'm finding the prospect of a "dunno" not exactly appealing when I could be driving home. I realized it was time to get crafty.

A nationwide tour means equipment, and equipment means load-out and probably also a tour bus. I left the bar and walked to the back, and there it was, a large tour bus with guys loading equipment into it. There were four who were trying to jam in equipment any which way they could, and one guy who was ordering them to stack equipment in a particular order.

Ten bucks and a cookie says he's with the band, I thought.

I waited until they were done, and walked over to the Clueful Roadie, and explained that I was trying to get CDs signed for friends. He nodded, took my Sharpie and CD covers, and ducked inside the bus. A few minutes later, without ever seeing or speaking to the band, I had signatures.

After I wended my way through the eternal construction zone on the U of A campus, I called Alice and told her that I had a signed CD for her. I was driving with my cell phone cradled between shoulder and neck, as I drove with one hand and massaged the center point of my growing headache with the other. She -

Brad, you were there. Was "shriek" the right word? Whatever it was, it sounded really loud. Hope your ears survived.

- anyhow. She [whatever]ed. I slugged PowerAde and called other friends. Somewhere along the way, I got the bright idea of trying to complete the drive without caffeine.

The guy on the other end of the phone can testify to the steady decline in quality of my conversation as I drove home. The closer I got to home, and the closer to three a.m. it got, the simpler my sentences got. I could not believe I'd agreed to do this, and I had two more nights of the same to look forward to. My last words before shutting off the car: "In driveway. Home now. Sleep now."

This was just day one. Day two, thankfully, was a very different story.

On 23 Sep 2003, Alice said...
Sorry Amy :) Yes my shrieks are not nice when you have a headache; however if it makes you feel better I've been louder. Thanks so much. I now get to look forward to hearing a new GBS album I haven't heard before and it's signed. (Shriek! Shriek! Bounce Bounce)
On 24 Sep 2003, Suzan said...
It's been a while since I've seen a website as bland as that one. Ah yes...bar accoustics. Possibly the only thing worse than Centenial accoustics...
On 24 Sep 2003, misty said...
Whaddaya expect from a place that also hosts the Miss Hawaiian Tropic contest? That shoulda been your first clue. Glad Damien Rice was good and FREE!!
On 24 Sep 2003, gfmorris said...
*snicker* Yeah, those drives back are always a bitch. I've actually pulled off at Cullman and gotten a hotel once when coming back from T-Town. It's okay until you get past Warrior and it starts to flatten out again. But yes, this is why you cultivate friends in time zones behind yours. :)