Loss came through tweets and emails, a drip of information at a time. First a note from a tech staffer saying that someone had died, with a pointer to more information, including the name.

I saw it at work, and I wondered who it would be, whose name had to take on a different status. Death is so final it seems that we should all be able to feel it when it happens, to know that something is missing that wasn't missing ten minutes ago. But it's not like that. We have to be told, and for me it was via email.

I didn't know Phil as well as many of my friends did, but his was a presence I enjoyed, and would not turn down if it was offered. Phil was memorable, flamboyant, outrageous; he earned his 'ink pad' nickname through an exploit at dragon*con that we still talk about today. Most of tech staff couldn't make it to Phil's funeral, but we decided to have the wake at Kim's the day after Thanksgiving. Black Friday? Sure. Seemed oddly appropriate. 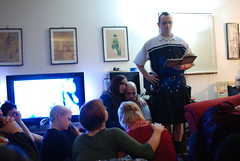 I will tell you this. We cried. It was easier to look around at the other people in the room through the lens of the camera, because the grief was there and palpable and rubbing raw at the throats of every person in the room, and the lens of a camera can sometimes provide the illusion of distance, while giving your nervous hands something to fidget with. I watched my friends in front of me hold each other as they cried while Crispy spoke, and I thought, how sad it is that we never find out how we're going to be remembered.

But we'll also remember Phil's wake as the night that Ogre proposed to his girlfriend: 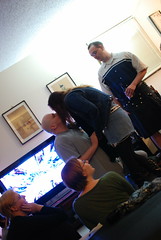 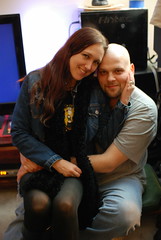 ...and silliness and camera-clowning we'll all probably regret when our grandchildren see these:

(Michelle via IM today: "Why are we all always grabbing each others' boobs? Were we all bottle fed or something?")

Life's like that. It's a blend of sorrow and magic, tears and joy, and all the mundane bullshit you go through with your friends on a yearly basis. I've felt so out of the loop over the past year as my day-to-day life has been eaten by my job, but this group is home in a way that no other place has ever been. We button our shirts and our lips and our opinions when we're on the clock, but this group of people sees the unfiltered version: glorious highs, warts, hangovers, and all.

I missed them so much it ached when I walked in the room and saw so many people there, and that made it worse to see them grieve so much.

But then the stories came, then the photos, and then the remembrance, and I realized that I want to stay a part of a group that can take a moment like the one on the left and turn it into the one on the right: 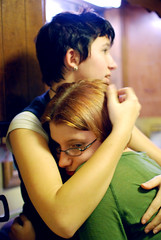 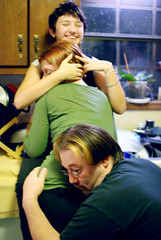 I stayed up until four a.m., curled up on the couch with a friend, talking, watching; one by one everyone left until it was just us, the glow of a computer monitor, a never-ending trance mix and a dying fire. Before I closed my eyes, I thought two things:

1) God, Chocobunny, please stop snoring and
2) Whenever my time comes, I want it to be like this.

(In fact, I wrote about that once. Instructions included in that 2005 entry.)

On 26 Nov 2007, trickjarrett said...
As always dear, very well said and beautifully shot. I wish I could have made it up there but life wouldn't allow it. God 2007 has been a f*cking shitty year.