I've been a bit remiss. I have been working on a quilt project but haven't been posting about it. I have been taking photos, though.

I did finally finish the top for 'Linus' but the only photo I have of it right now is a crappy fluorescent-lit shot: 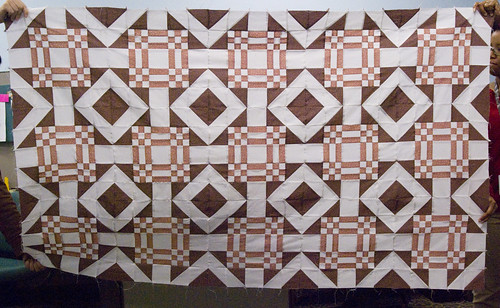 The colors are prettier in person, I promise; I will try to get good sunlit shots of Tenzing doing his best to sleep on it while I quilt. It's a ritual: I try to quilt, he snuggles on the project in progress. We make a good team, his loose kitty fur and I.

The big crazy fun has been on 'Oregon Trail,' which has sent me into full-on quilt forensics mode. My first order of business was to build replacements for all the damaged sections at the bottom, shown here: 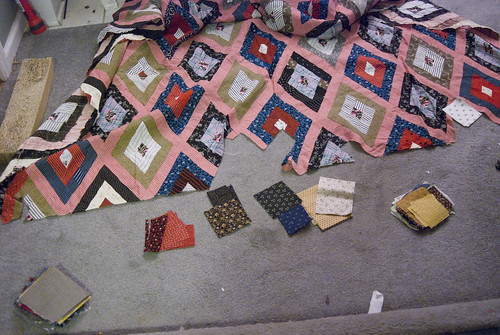 I rebuilt the broken areas, piece by piece, and then sewed in the replacement sections. The bottom looks like this now -- and yes, I know I need to trim those ragged corners off: 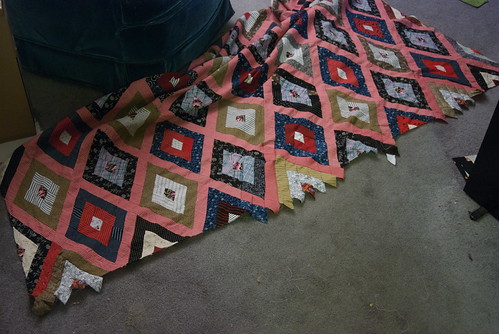 In the last couple of nights, I did some further investigating of some weirdnesses I saw while playing with the quilt top. When I was turning it over, a flutter of fabric caught my eye, and when I looked closer I realized a section of the quilt (one of the diamond figures) was blown out, and flapping loosely. I was confused about why I'd never seen this on the front of the quilt, so I turned it over and went hunting -- sure enough, one of the previous owners had [very clumsily] sewn a patch ON TOP of the blown-out figure.

Last night, I grabbed my seam ripper, otherwise known as my scalpel of choice, and started dissecting. I removed the patch, removed the damaged figure, and built a replacement to sew properly into the hole. I have photos of the dissection, but haven't posted them yet because I still have a few individual fabric pieces around the hole that need repair, too.

In other words, it will be done, and it will be done right. It's taking longer than I'd hoped, but I'm trying to spend some time with Jeff on every day that he's lucid, and it doesn't leave me much in the way of personal time.

I'd hoped to be quilting by this weekend, but my sewing machine requires vastly different tension for sewing than it does for quilting, so I'd rather just swap the machine over once and be done with it. I'll hold off quilting Linus until Oregon Trail is ready to go, too, and then go on a bit of a quilty extravaganza. Clear off the table, reset the sewing machine, annoy the cats, and all that jazz.

That, and antidepressants, are helping me cope while Jeff is hospitalized. As coping mechanisms go, it's pretty positive stuff.