I had assumed my life would never again contain concepts like 'anniversaries' and to be wrong brings astonishment, even to this very Pi day. The improbability of it takes my breath away, if I pause to think about it. 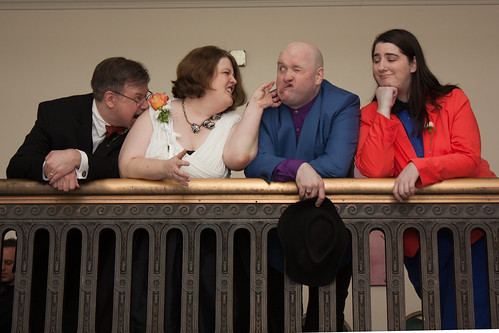 Everyone be yourselves
by domesticat.

This was Noah's wedding gift to me:

How could I have foreseen This extravaganza
or intended any of this absurd odious Odeon
bullshit that I guess playing it to the end
became my life at some point bard into drab
I thought I'd established early O, Lothario
the way life was supposed to be beautifully
ordered and sane insane lascivious and wild
there were rules that gave pause unreliable
a way to be a dashing madman in the shadows
a person in the world inventing worlds anew
and if the rules didn't work fuck the rules
you could make new ones fuck it all down, I
understood and sane ain't never sane, buddy
I didn't think I was so poor I couldn't pay
it was held together with nothing attention
and all you've built nothing holds together
just goes away slouching alone toward Sodom
and disaster doesn't ask permission madness
and the rules don't stop it really not okay
one morning you wake up all alone all of us
your job becomes figuring out how will I be
who I am now without a hero taking my stand
the world I built against the world that is
just thinking about it so damned exhausting
terrifying, but I can't face the thought of
liberating, and rebuilding a whole identity
to reinvent oneself one more goddamned time
means that I could find what I just want to
I never knew I needed, a place to fall down
fit perfectly with all of my broken baggage
for the shape I am battered wreckage, and a
collection of missing bits, and a slim hope
hope that maybe just maybe there is a place
I can be with someone someone somewhere, in
a home an unexpected corner of my damn city
after an unexpected journey where I can get
a place that's warm and safe a little space
I want that I'd give up everything for that 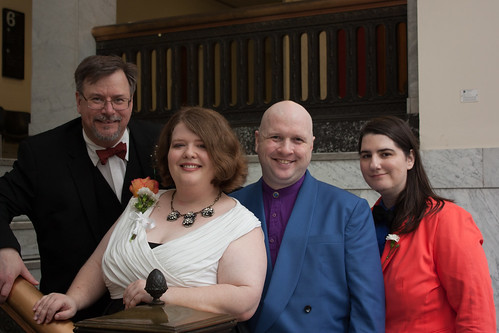 Hobbit technology at work
by domesticat.

When we moved in together, we learned that years ago, we'd separately purchased prints that had meaning to each of us by the same artist, so as part of moving in together, we hung them together by the door of our bedroom: 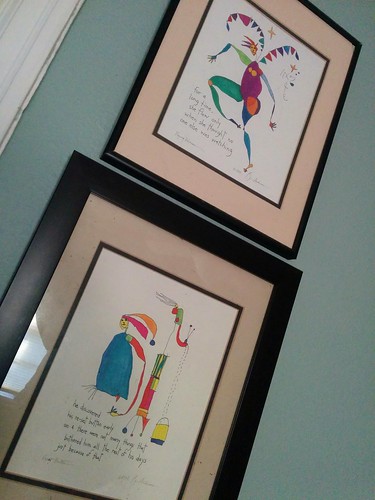 On moving in together
by domesticat.

for a long time, she flew only when she thought no one else was watching