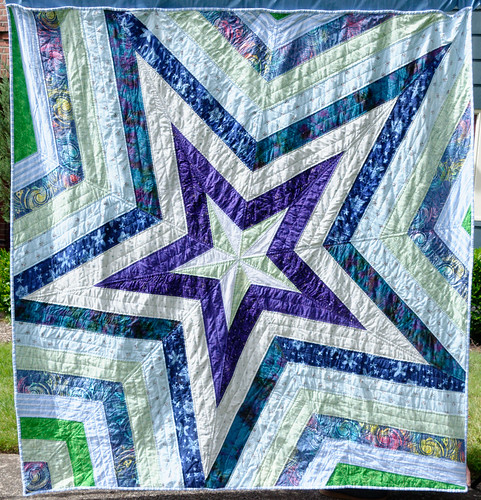 Recipient:
Cat
Pattern:
Star Storm
Level of completion:
Completed and given away

From 2010-2011, every time Jeff was in a hospital, I ensured a hospital gown came home with us. By the end of the year of hospitalizations and the surgeries, it was quite a pile. Later, when we divorced, and I was packing up my sewing room in early 2014, I looked at the gowns and made the decision to bring them with me, even though I had only snipped a few, small pieces out for quilt use. They represented hope and grief and loss in equal measures, and while I wasn't sure I would ever be ready to cut into them, I had to take them with me if I wanted to retain the possibility of ever using them at all.

When I set up my sewing room in Portland, I refolded the gowns carefully and put them on a high shelf. Every time I started a quilt project, I asked myself if I was ready to cut into the gowns, and the answer was always a lump in the throat and a shake of my head: No, not yet. Someday, but not today. I wasn't sure what I wanted, but even as moving led to meeting someone and eventually to marriage—if you'd told me in 2014 that would happen in 2017 I would have laughed bitterly until I pissed myself—I wouldn't toss the fabric out. It sat there, on the high shelf in the sewing room, above my shelf of math-and-quilting books, waiting for me to be ready to pull them down and, somehow, grant them justice.

I found Victoria Findlay Wolfe's Star Storm pattern in April of 2018, and bought it the next day. I'd never seen anything like it, and I wanted the pattern for multiple reasons past wanting to do the pattern. The audacity of it delighted me; I wanted to know how she'd constructed the pattern, and I wanted to make sure she got some money for it. When I read through it, I looked at the fabric quantities (several of the rings require 1.5 yards of a fabric) and my eyes immediately drifted up to the stack of hospital gowns. I cocked an eyebrow at them, as if to ask is this the pattern you've been waiting on me to find? No answer, of course, but that's the nature of grief and loss: you learn to live with the lack of easy answers.

I think I told Jacob and Andy of my intentions at least a year before I started working on the quilt: I'd found the right pattern, but I wasn't certain when I'd be ready to take it on.

On April 20 of this year, I realized I was ready. I pulled down the gowns and—rather than immediately start cutting into them, I spent time with them. I pressed them, placed them on my sewing table, and gave myself permission to think about everything that had transpired since I first held them in my hands. Tenzing and Edmund: gone. My first marriage: gone. Beryl and Kolohe: adopted, loved, then gone. Noah, moving in with Frankenstein and Toph. Losing Ms. Frankie-two-fangs. Marrying Noah. Australia. China. Cuba. Morocco. The Alhambra. Germany. The pandemic. Life had continued, in its ceaseless march from day to day, and the gown from Vanderbilt Hospital had a year stamp from a different decade. Another had a faded line where the sun had hit it every day for close to a decade.

I'd said I would know when it was time, and I did. The memories came and went as I cut into the gowns, but it was comforting to see the gowns turning from sadness to, well, ANYthing else. 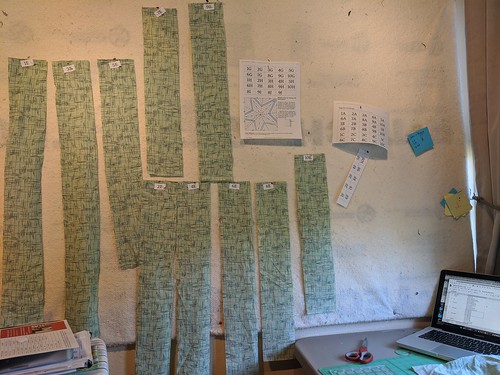 Hospital gowns in use at last
by domesticat.

The running order for the rings developed fairly quickly: 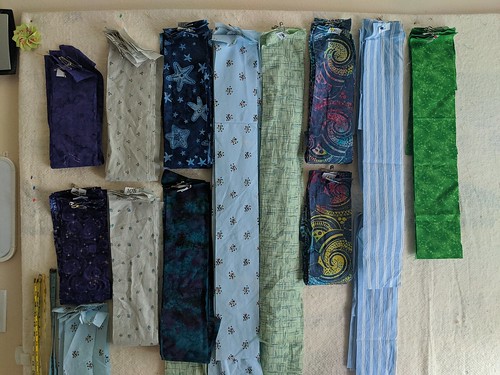 The running order
by domesticat.

When I sewed the first four sections together, I sat and stared at it for a long time, because I hadn't expected the gowns to just … blend. I expected them to still look like hospital gowns jammed into a project otherwise filled with quilt fabric, and I was surprised to see that they just fit. 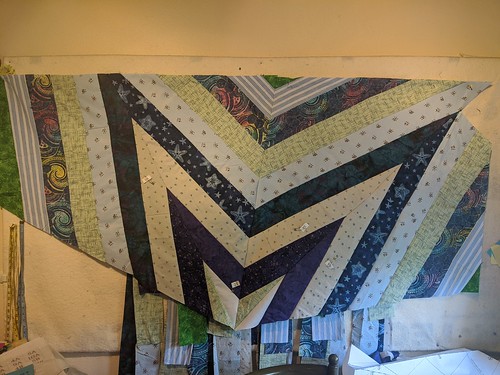 Proof of concept
by domesticat.

When I joined the star together, I started sending text messages to friends with this photo, showing what I'd done, even though I hadn't even bothered to move the ironing board or table out of the way: 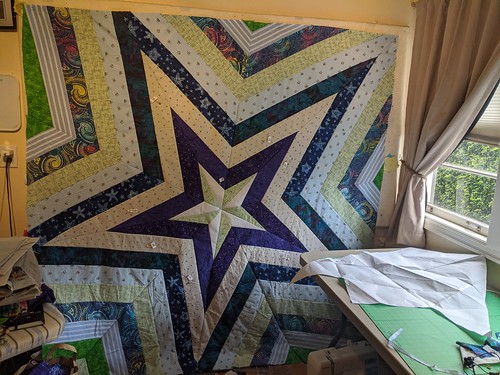 Completed top (1 of 2)
by domesticat.

When my sewing machine started to have problems, I ended up borrowing a friend's industrial machine and then buying a machine for myself. (Hello, Lucy.) And then this little nugget arrived: 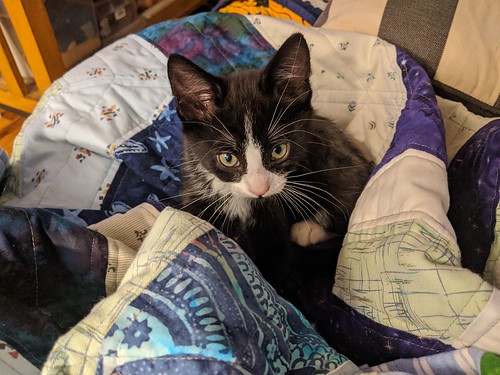 Quilt kitten in training
by domesticat.

I spent years expecting these fabrics, when I finally worked up the courage to use them, to tell a story of grief and loss. While they do, I was surprised to realize they also tell a bigger story arc than I originally intended. Coriolis is the first quilt I finished on my new sewing machine, and the first quilt Pippin snuggled in. It's the quilt Pippin and Toph dove in and out of while learning to play together.

It's my story of change and growth after grief and loss. I still don't believe "things happen for a reason" (saying that to me is asking me to kick you in the balls) nor do I believe "what doesn't kill you makes you stronger." I am a pruned branch. My life will never grow in the direction it would have grown if those events hadn't happened. It took time for me to figure out how to grow in a new direction. I have a house panther, a tuxie kitten, a new sewing machine, and a spouse who wants to watch Duck Soup with me tonight.

There are more quilts to make but this one, at last, is done.