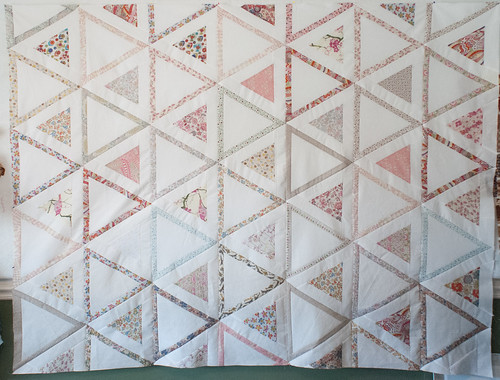 Recipient:
Diana
Pattern:
Chopsticks
Level of completion:
Completed and given away

This quilt is a simple one, born out of frustration with a work project that ate a lot of time out of each day, and continues to do so. At the end of each day, I'd feel that I'd not actually accomplished anything new, and I'd be frustrated with myself because I felt like I'd wasted that day.

I started thinking about Misty's "make something every day" artistic pledge, and I joked about it with her while we were attending an intro-to-letterpress class. She mentioned how this craft meant that you couldn't necessarily get far with 20 minutes a day, but 45 would probably do better.

This quilt top so far has been comprised of 30-minute chunks of time stolen in the evenings. Because of the changes to the house (new flooring, new paint) I've been leaving the mini-blinds up as much as possible, and enjoying the light. I wanted to queue up something after Invariant that was its opposite. Not Japanese somber neutrals, but light. Bright. Soft.

Easter was coming, after all.

I pulled my Chopsticks pattern, which I've used once before, and gave myself a stern talk. It was okay to reuse a pattern. It wasn't "cheating." Yes, I've slowly been working my way through lots of the well-known quilt patterns, trying each on once (I've been waiting for everyone else to figure this out) and moving on, but I just wanted to put something together and FINISH something.

I'm sure most of you rolled your eyes and said, "you have to give yourself permission to reuse a pattern?"

shutupshutupshutupIhearyou. I KNOW IT IS DUMB. Sigh. It's good for me to get over it. Just pat me on the head and remind me that it's ok.

I had a huge, long swath of white cotton that a friend had given me from her valiant failed attempt to make curtains ("can you use this?" was greeted with the evil cackle that quilters get when someone offers them 5+ yards of pristine neutral fabric) and I said, hmm, how about we take the rotary cutter to the Liberty cottons?

It's not cheap, but it cuts like butter. It's a joy to work with -- anything that costs that much per meter had better be! -- and I brought home plenty of it from London. I sorted through my pile and pulled the softest, lightest, most barely-there colors I had and cut deeply. I wanted something that felt clean, soft, like that first hint of crocus after a late spring snow.

I'm hoping that with some careful cutting, I can use up some beautiful Liberty fabric as a backing, too. This quilt will be an indulgence -- I just have to figure out who it's for.