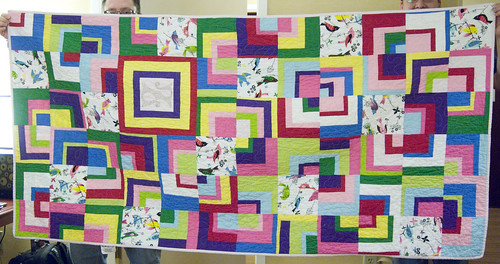 Recipient:
Charlene and Pat's daughter
Pattern:
...freeform
Level of completion:
Completed and given away

It was never my intention to keep Fledgling a secret, but the quilt is out and gone now without much in the way of written documentation -- but there was a reason, I swear!

It's always hard to admit when a project isn't right. I've had that problem before, and I was grateful later that I stopped quickly before I dug myself into a much deeper hole than I had already done. That lesson served me well in this quilt, though it delayed completion by a few months.

I found a fabulous fabric. Bird fabric, even. When I saw it, I thought it would be neat to use it as a focus fabric and pick solids that matched the solid, 1950s, colors in the bird fabric. Given that it was intended as a child's quilt, the name "Fledgling" was far, far too easy. 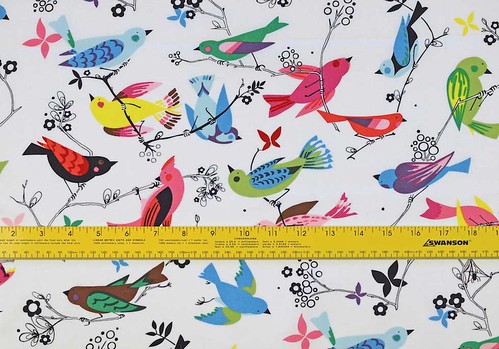 Birds of a feather
by domesticat. 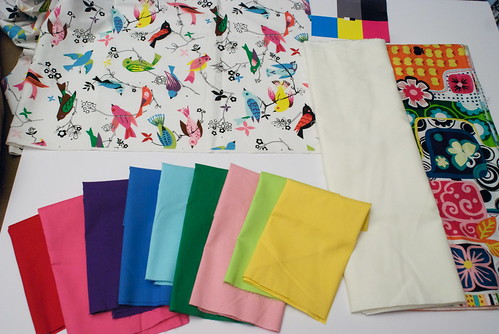 Fabrics assembled and ready
by domesticat. 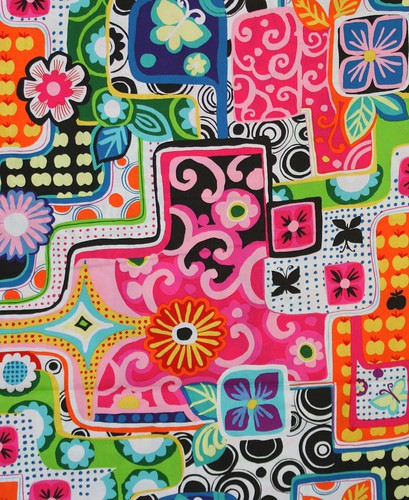 The problem? The design didn't work. I wanted to put the birds in the center of each block and then surround them with different colored blocks, done in a not-parallel-lines pattern. I learned quickly that this method wasted a lot of fabric, was horrifically slow, and still didn't give me the results I wanted. I stopped the project, set it aside, grumbled every time I saw it in the box, and left it alone. 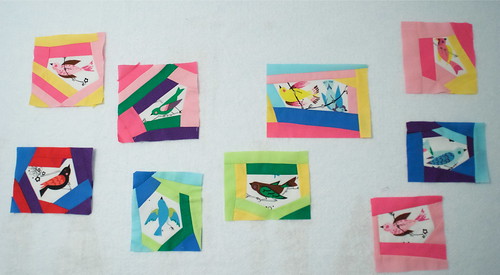 In the meantime, Zoe was born. I was late; I'd intended the quilt to be done before she was, and I missed the deadline. I kept reading.

Fast-forward through the first nine months after Jeff's accident; not much sewing happened then, anyway. Id mid-summer, I started idly researching patterns, but never found one I liked. Fast-forward even more, to the Very Quiet Job Interview process; landing the job meant I wanted to take a week between jobs to travel and rest before starting the new job, and suddenly, there was …

BADCamp! The Bay Area Drupal Camp. I could go out and see lots of Drupal people at once! I could knock a complicated itinerary back down to a more manageable one and -- hey -- whaddaya mean, @crashtest_ is gonna be at BADCamp?  (@crashtest, aka Pat, is Zoe's father.)

Right. A week to go before leaving for BADCamp, I officially got my shit together in a rather ferocious way. I pulled out the pattern I'd returned to a few times (a disappearing log cabin) and said, "Can I do this?" immediately followed by "Can I do this in time for BADCamp?"

Answer: yes, but it was damned close.

There was a weekend sew-a-thon...

and an emergency check of layout... 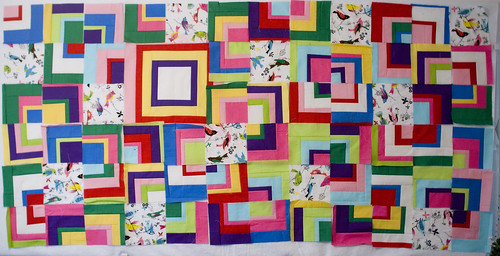 followed immediately afterward by the quilt-a-thon. Keep it simple, Amy. Now is not the time to be tracing hearts and flowers. Get a good, solid meander on that puppy, get it bound, and … hey.

Look at that white square.

I could put some tricksy quilting in there!

Cue Amy racing back to our graphic design computer (aka the desktop computer) and rampaging through the decorative fonts. Decorative initials were the order of the day. Something funky and fun that I could trace out with stitching, because hey, I've got rainbow thread and I know how to use it.

I found a good 'Z' and got ready to trace it … sure enough, it was a Sunday night, all the craft shops were closed, and did I have any tracing paper? Nope. So I set the printed letter down on the white square, and started punching holes in it with my quilter's pencil. Shortly thereafter, I realized this was utter lunacy, and somewhat painful to boot, so I started poking starter holes with a safety pin and THEN sticking my quilter's pencil in the holes to make little marks. 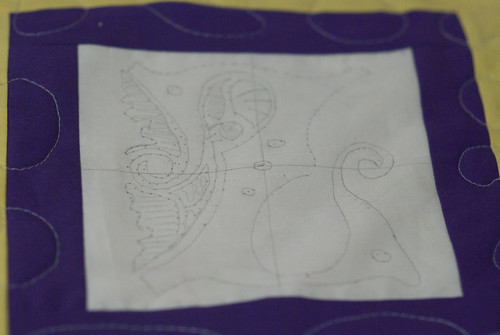 Connect the dots, and you've got a working pattern. I outlined it with thread and then began to fill it in with the tiniest damned stipple I have ever attempted -- seriously, Amy, do not do this again anytime soon without a Very Good Reason -- and the clock was tick-tick-ticking. BADCamp was approaching fast, and I needed to be on a plane. 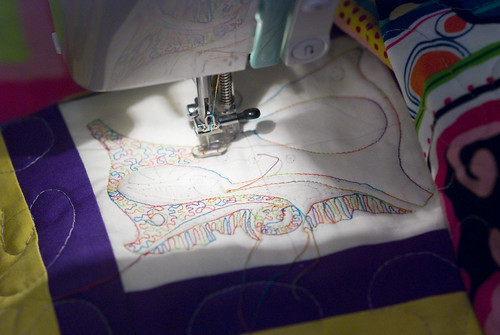 Z is for Zoe
by domesticat.

I prioritized. I couldn't quilt on the plane, but I could hand-sew. If I could get the quilt completely quilted, and machine-stitch the top half of the binding down, I could work on the second half on the plane -- or even at the House Of Chaos the night before BADCamp started.

Except, it turns out, that when I'm motivated, I stitch really fast.

I yanked the quilted piece out of the machine early in the evening of the last night I was home, and applied the machined part of the binding. Hmm. Time looked good, so I settled in with an episode of Dirty Jobs. I knew I couldn't stitch for long, because I had to get up at 4am to catch the first flight out of Huntsville the next morning.

By the end of the episode, I'd finished a third of the quilt.

By the end of the third episode, I'd finished the binding. I promptly threw it in the washer, and stayed up just long enough to get it in the dryer, so that it could dry while I slept. I left myself a ginormous note: "DO NOT FORGET QUILT YOU MORON" and went to bed sometime after 10pm.

After the ass of dawn cracked a few hours later, I got up and pulled the quilt out. PLEASE let it not have popped seams in the wash, please please PLEASE. I was shocked to see that there were no pops, not anywhere. I folded it, stowed it in the bag, and made sure I packed needle and scissors to work on weaving in the ends at House of Chaos.

…and the night before BADCamp started, we invited a group of people over to our room to socialize, chitchat, and embeeren. As part of the evening, I said, "Hey crashtest!" 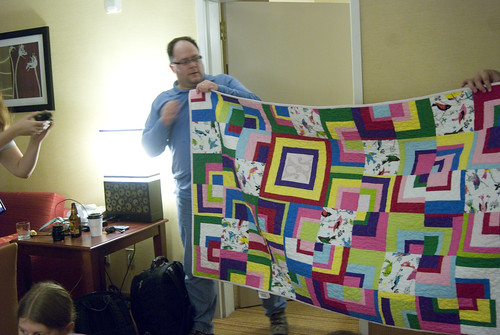 Many photos were taken, most utterly silly, and normally faraway friends held up the previous night's labor of love out straight in the air so I could get one straight-on photo of it before Ms. Fledgling went on to her new life in Washington state. 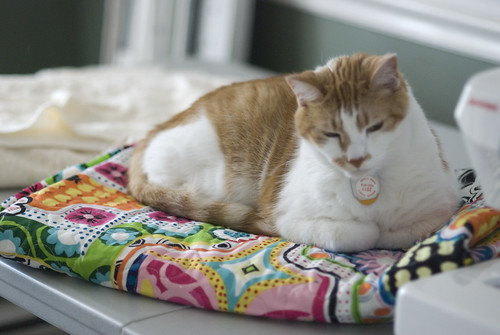 I'm on to you, Mom.
by domesticat.

I can't believe you did this

I can't believe you did this so quickly. It's truly stunning. And the Z is one of my favorite parts! Love the story behind the quilt. It's a lot like the process of writing a book; sometimes the initial approach just doesn't work and you have all these components laying around that won't make a cohesive whole. Until you finally find the approach that works and it all comes together like magic.

PS Tenzing is a wonder.

We love you!  If you ever want to come and steal the quilt from Zoe for a few nights while you enjoy our peaceful little seaside village and relax, you have a place to do it here. Anytime!

Thanks again, and yes, they were silly photos but I was just that happy :)

Love that bird fabric, love that backing, and the quilt turned out beautifully, as always. :)