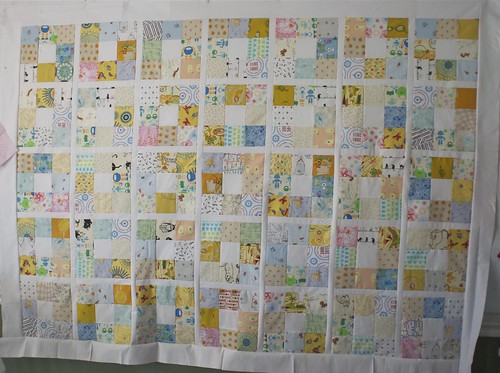 Ready for quilting
by domesticat.
Photoset:

Recipient:
Dave and Jenny's son
Pattern:
Squares within squares
Level of completion:
Completed and given away

This ... THIS ... has been the secret project. The one I couldn't explain much about, because if I said anything of substance, I would give away a secret that wasn't mine to tell.

Here's the problem, and the joy, of the Drupal community. Everybody knows everybody. Doesn't matter that we all live in different states, or that we work for different companies. We know each other. Sometimes we know MORE about each other than we want to know, and the only way to keep a secret is to keep your big, yapping trap shut.

More on that in a moment.

On February 7, I got a message that caused me to leap from "tired" to "omg excited" within five seconds flat:

GET TO WORK!
by domesticat.

I think it was just the kind of boost I needed, because within a half-hour, I was muppet-flailing through my stash. I knew what I was looking for, but I pulled everything I had that felt right, and set it out on the table: 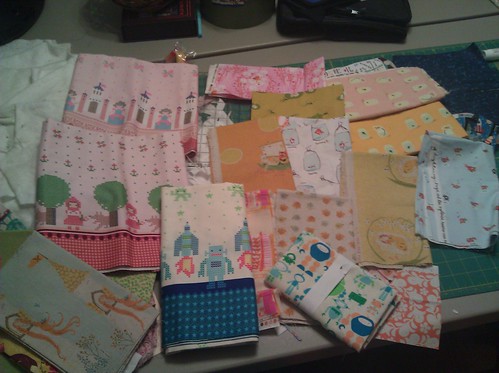 I knew what I wanted; it's the combination I tend to refer to as "lights and brights." Not exactly pastel, but ... sweet. Comforting. A little soft. An emphasis on warm tones. (I'm looking at you, Jacob, and your reminders a couple of years ago that I needed to buy more warm-toned colors. This quilt is proof of the success of your advice.)

More than anything, I wanted it to be the equivalent of a smile. Not a nasty in-joke, but a sweet one, because I defy you to look at these photos and tell me "She's not ready to be a mom, nope." 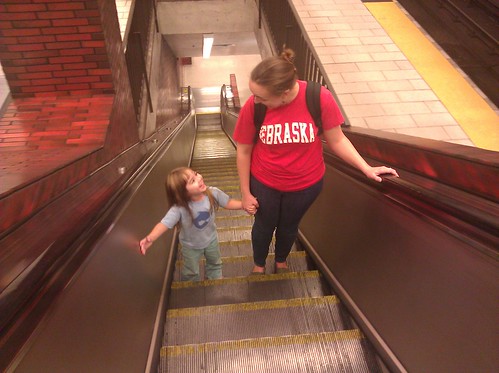 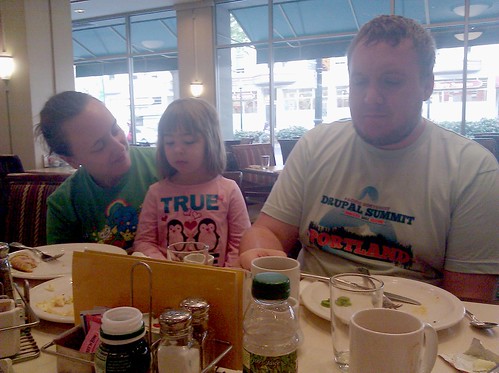 Dave, Jenny, and Sprout
by domesticat.

(Don't worry, Dave, you'll be fine. I just don't have the equivalent photo for you.)

So I went through my stash in record time -- I kid you not, I don't think I've ever put together a planned-scrappy quilt within a half-hour -- and pulled out what I knew to be right:

I wanted it to be simple, so I thought ... why not squares within squares? That would give me room to do something a little interesting with the quilting. Make it personal -- though I didn't know how, just yet. 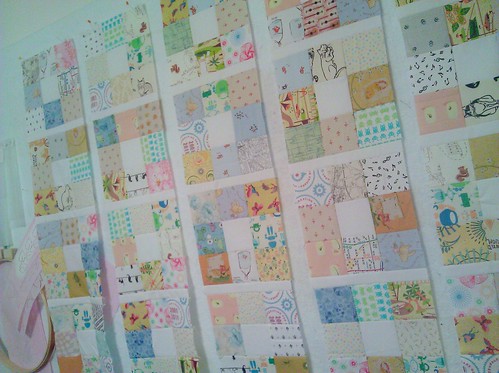 I made it personal for me, too; this quilt is yet another in the set that contain pieces of Jeff's hospital gowns. This is an incredibly deliberate choice for me -- and no, I won't tell you which fabrics they are, unless you ask. I don't see it as "sharing the pain," but instead more of a gesture, of trying to find a way to say, "Thank you for the solidarity." Every time I cut pieces of those hospital gowns and put them in a quilt, it is a tangible expression of thanks.

I mean, he's even in the picture from DrupalCon Chicago, right there in the middle: 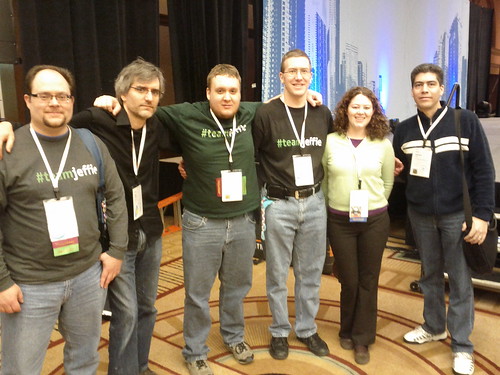 I didn't really have a name for the quilt, just a stronger impression of color and emotion than a name. As I sewed the squares together into sets-of-nine, I found myself thinking of the white square being like a little matryoshka doll, hidden inside others. 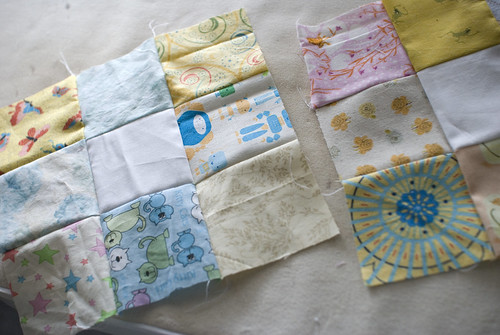 I liked the euphemism for pregnancy -- a little surprise, hidden inside. I called it named and moved on.

Jenny and Dave were aware of the quilt from the start, so I didn't have to hide the project from them. There was no question of what to put on the back of the quilt; the backing had to be Nebraska fabric, no question. Both Dave and Jenny are Nebraska alums, and they're vocal fans of the football team ...

...and that's where I stopped short, when I realized I couldn't show much about this quilt. They weren't publicly acknowledging that Jenny was pregnant yet, and remember what I said about the smallness of the Drupal community? If you plotted these into a Venn diagram:

So, Ms. Yappy Pants had to keep her trap shut. There would be no showing of Tenzing helping me bind the quilt, because oh look! Nebraska! 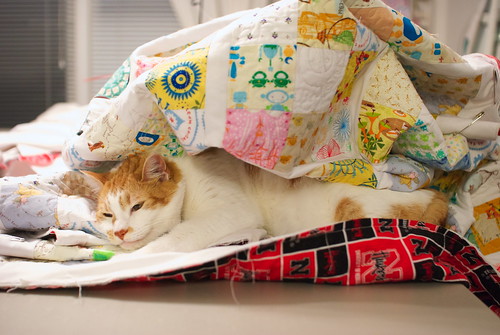 Look, just don't sew and we'll both be happy
by domesticat. 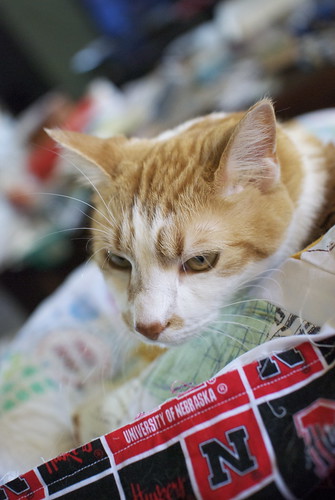 So Tenzing and I got to work. After all, there was the unspoken deadline of DrupalCon Denver. Like I would miss out on the opportunity to give them this quilt in person. Luckily, Tenzing was up to the task. 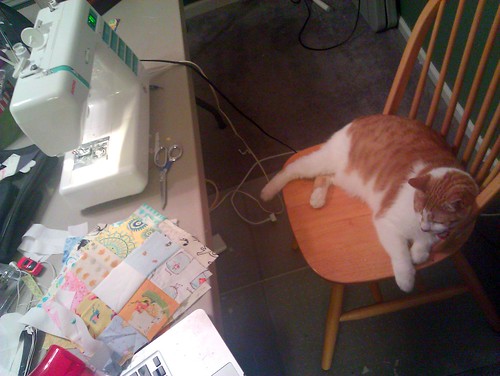 I built my sets-of-nine, my little nesting dolls, 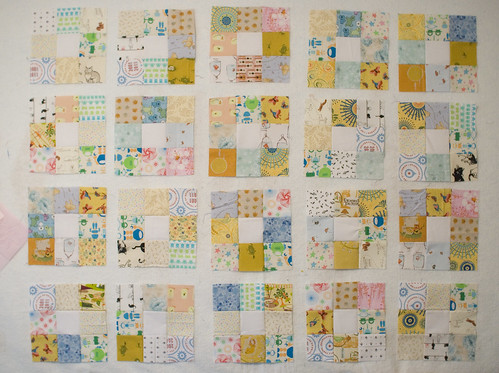 First against the wall when the revolution comes
by domesticat.

and turned them into strips.

I quilted in fleurs-de-lis, 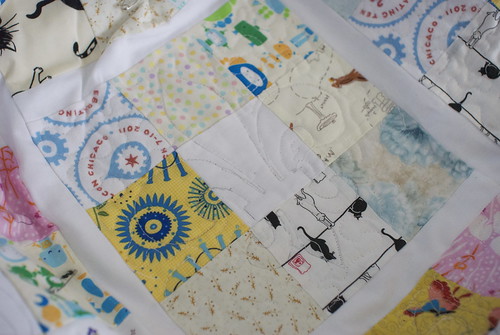 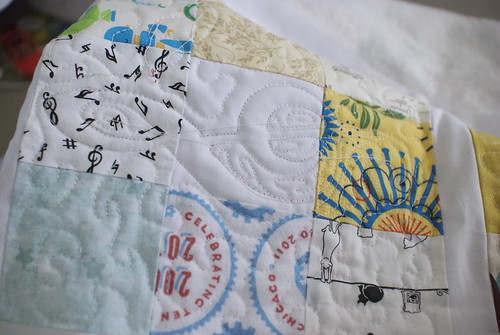 and as expected, had to fight The Usual Suspect for access to the quilt. 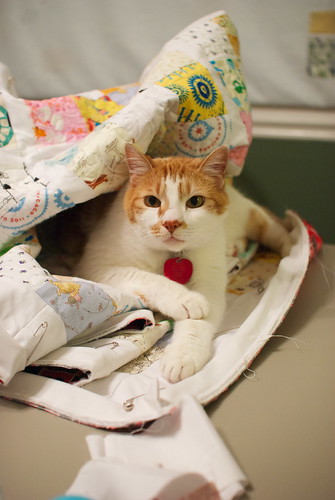 Someone has a nosey.
by domesticat.

I was sitting in the Huntsville airport, still frantically weaving in thread ends, when my flight to DrupalCon Denver was cancelled. I was sent home with a ticket for the first flight out the next morning, and I spent most of the evening finishing up the quilt. It's the only time that having a flight cancelled was probably a good thing -- I don't know that I would've finished the quilt, otherwise.

It got done, though, and just in time. Jenny got to see it right before she had to fly home, and Dave got to have it in-hand for almost all of the convention, and I got to grin like a fool every time we showed it to someone. It was silly and whimsical and my usual twin-size, so it'll still be useful for the little one even after The First Birthday.

I'm a little bummed that the final photo, taken in the bowels of the convention center in Denver, turned out so poorly, but I can already tell you what Dave's response will be:

"Guess you'll just have to come visit, and photograph it again."

It means I'd finally get to meet Athena and Rodney in person! 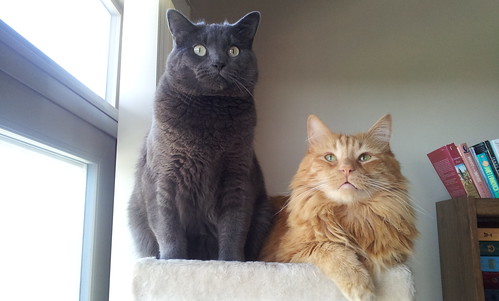 There are worse things in life, I must say, than sending a quilt from one orange tabby to another.

LOVE this.  How adorable!

LOVE this.  How adorable!  And it took me until the 2nd time to see the actual treble clef *stitching* on the quilt.  Too awesome.

Your story of making the

Your story of making the quilt is as beautiful and touching as the quilt itself. Jenny and Dave are so blessed to have you in their lives. :)