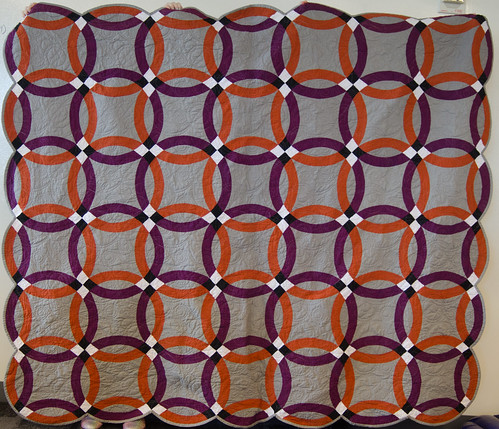 Recipient:
Robert and Aidan
Pattern:
Double wedding ring
Level of completion:
Completed and given away

It's been a pretty fallow time in the Quilt Factory, what with The Large One and I deciding to get married, and spending time together. The sewing room hasn't had my focus, and I've known it.

This quilt was born out of twin desires: to work with the not-quite-solids that are shot cottons, and to create a quilt that echoed Robert and Aidan's wedding colors. I had originally envisioned the quilt would use nothing but shot cottons, and picked these three (grape, steel, and bittersweet) for my plan: 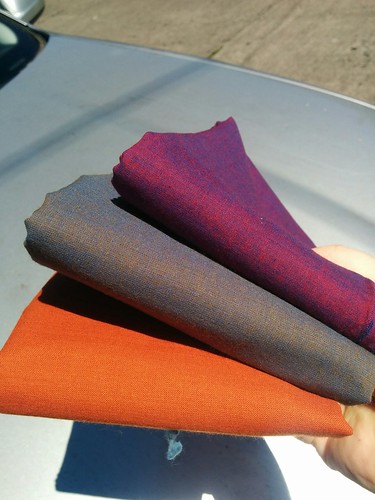 I took them to Group Sew night, and Sam helpfully saved me from myself by telling me that my grey was totally wrong. Sure enough, when the three fabrics were photographed in greyscale, it was obvious that the purple and grey would just blend together, leaving the orange to stand alone. I went back to the store and sought a lighter grey; Kona Pewter was the answer I sought: 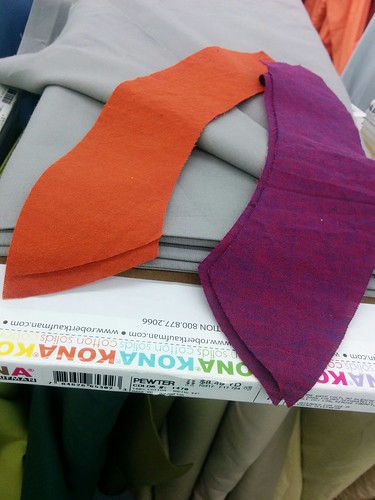 Assembly was straightforward but slow; a lack of straight seams will do that for you. The backing was an Aboriginal Australian print, in honor of Robert and Aidan both being Australian.

Since I had a coworker coming to visit from the UK who could hand-carry the quilt back to Robert and Aidan, I had to hustle to meet my deadline. Nancy, bless her, turned the longarming chore around in record time, giving me something that I literally finished within 36 hours of the quilt needing to go on the flight back to Europe: 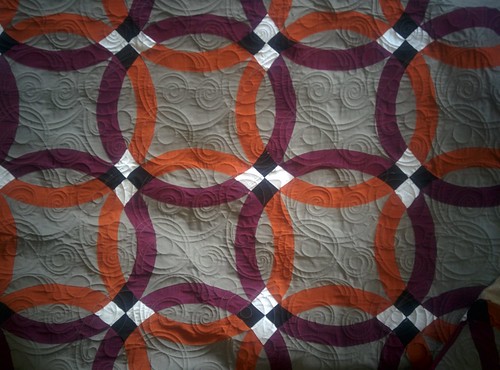 On the day I handed it over for John T. to carry it back home, the quilt hadn't even fully dried from its time in the machine dryer, so it had to be spread out across office chairs at work to ensure it was fully dry.