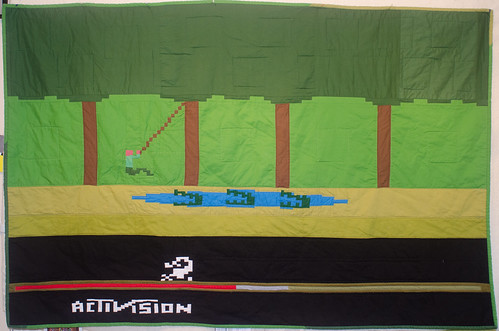 Recipient:
Ty and Josie
Pattern:
Scene from video game
Level of completion:
Completed and given away

I've wanted to do a video game quilt for a long time. My original thoughts had focused on Space Invaders, but I realized that several people had done Space Invaders quilts, and I wanted to tackle a different game. I thought about games I'd loved as a child, and Pitfall was the obvious choice. There was a specific scene that immediately jumped to mind when I thought about this video game, and I thought, "Huh, it's just squares, I can totally do this, right?" 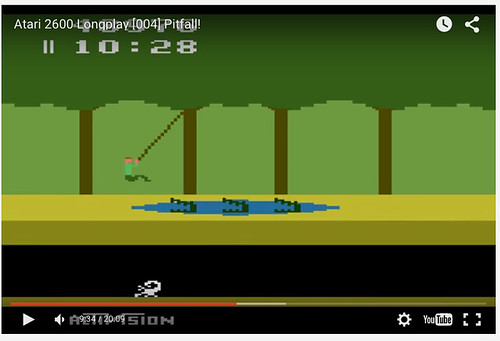 The scene I want
by domesticat.

I found some play-throughs recorded on YouTube, and screenshotted the moment I wanted: crocodiles with their mouth open, Harry in the air on the swing, and the scorpion pacing below. To my surprise, after I did more digging, I learned that the colors were changed in different versions of the game. I used this screenshot, too, because the Activision logo was clearer, but I didn't want these more muted colors because I didn't play this version of the game:

So, how to do it? Adobe Illustrator to the rescue. I overlaid a grid onto the screenshot, and sized it so the smallest detail on the screen -- the teeth of the crocodiles -- finished at 1/4". That created a finished quilt of about 52"x70". I then started overlaying rectangles of color, simplifying and gently shifting motifs in a few areas to make the details fit to a quarter-inch grid. Luckily, most everything fit easily, and the few things I needed to massage didn't require too much effort.

I color-matched based on the best screenshot, and made a labeled color palette indicating how much I needed of each color, so I could make one run to Fabric Depot to raid the Kona solids: 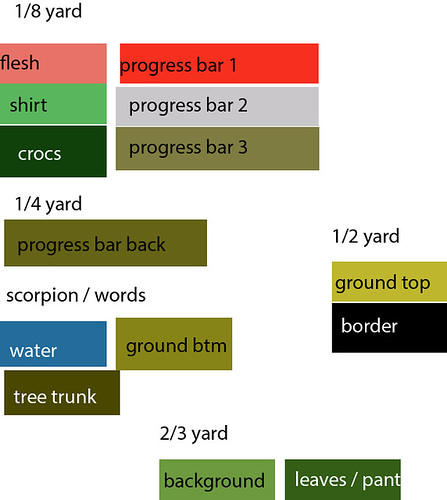 The person cutting the fabric was kind enough to give me masking tape, so I could label each color as it was cut. I won't lie: I spent nearly 90 minutes agonizing over "which olive-green should I use?" and wailing THEY'RE ALL SO DAMN SIMILAR: 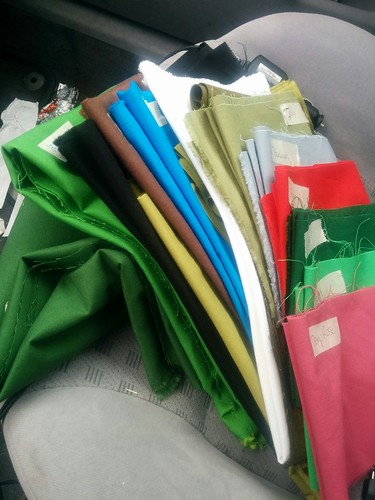 All fabrics for Pitfall
by domesticat.

In this photo, you can see the 1/4" grid in Illustrator, blown up to sizes that I could see from across the sewing table, plus some of the actual cut pieces I'd placed on my laptop to keep track of while I cut more. They were tiny, and were easy to get out of order if I didn't pay attention: 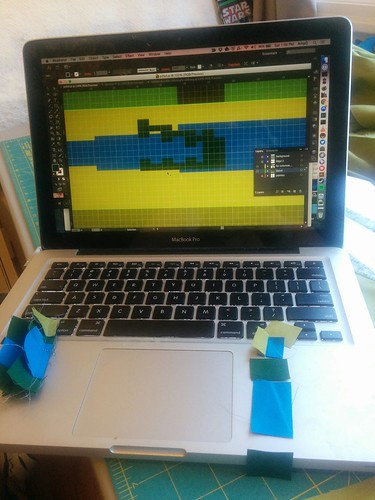 Croc plan in progress
by domesticat.

It was worth it, though. I laughed and laughed when I had the first one sewn, because if I could make the crocodiles work, the entire design would work: 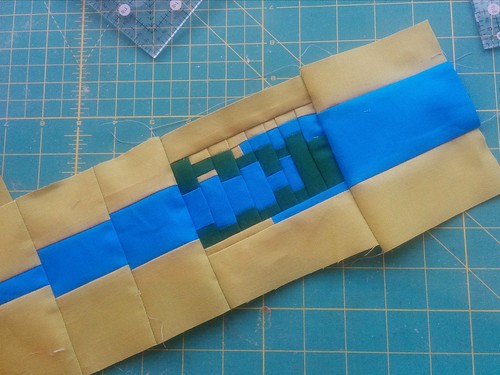 Crocodile #1 is swimming
by domesticat.

Seeing the scorpion come to life in fabric form just delighted me to no end. I have such vivid memories of watching it pace while I played the game: 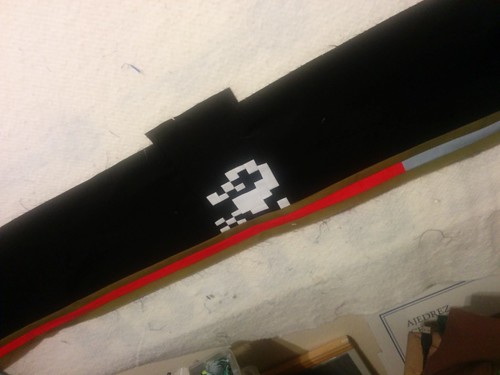 That. Stupid. Scorpion.
by domesticat.

Much of assembly was about "oh crap don't mix up the really similar green colors," like this moment, powered by a very large cup of tea: 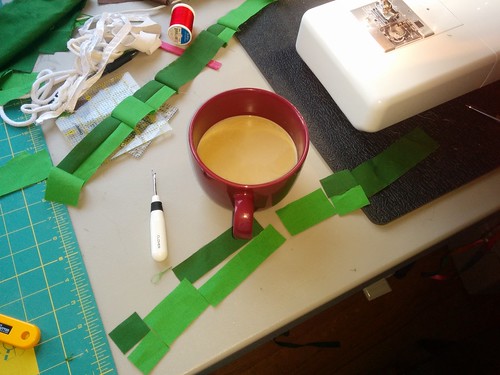 I didn't take pictures of the creation of the Pitfall Harry figure, but for me, the most important part was getting the oddity in the rope reproduced correctly. I remember as a child being annoyed and fascinated because the rope was never entirely even; there were always one or two dots of color that were a different size. I reproduced that oddity here, but didn't do a closeup photo of it.

The Activision logo was the better part of an evening, but when done, I knew I had it right: 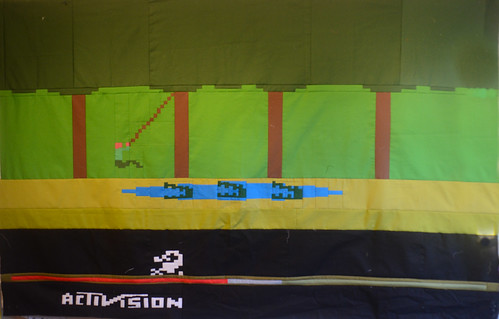 I worried a lot about the quilting. I don't enjoy free-motion quilting, but I wanted to make absolutely certain that those tiny pieces didn't move. I opted to color-match and echo quilt around both sides of each of the tiny pieces, to ensure they would never, ever move. Here's a crocodile, post-quilting: 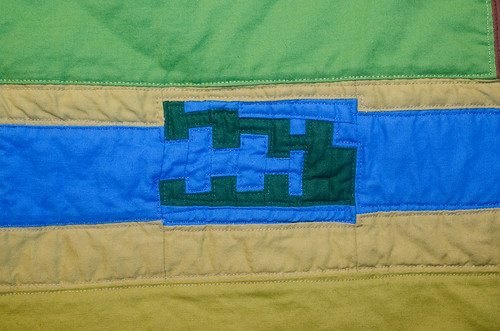 The back, as is typical for me, is a non sequitur; in this case, the Sloths and Toucans fabric by Sarah Watts from Cotton & Steel: 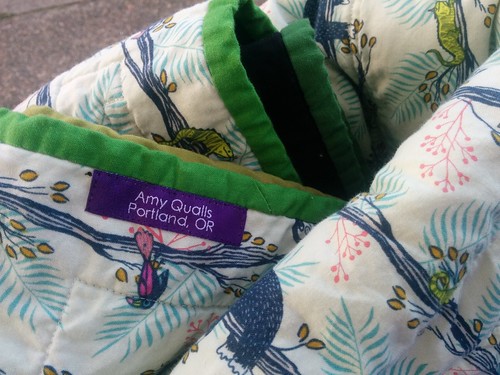 The back of the quilt
by domesticat. 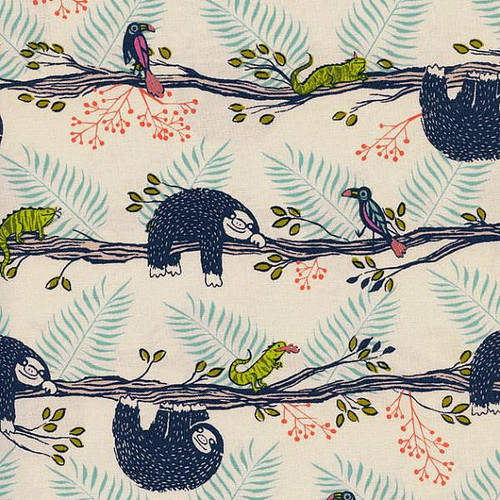 Sloths and Toucans
by domesticat.

I showed one of the recipients the backing fabric, while keeping the front of the quilt secret. Coworkers got photos of the moment when he saw the front for the first time. It was worth it: 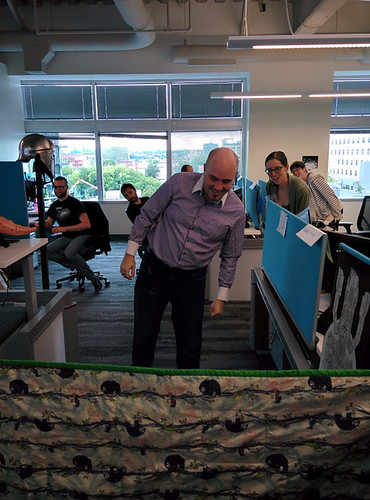 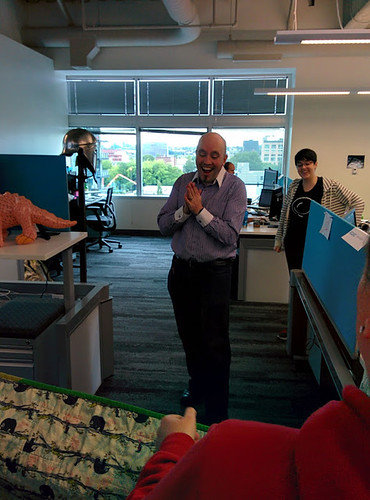 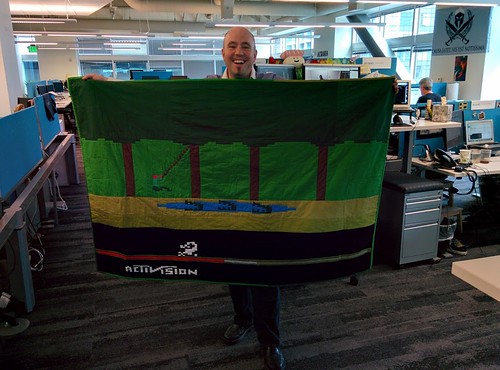