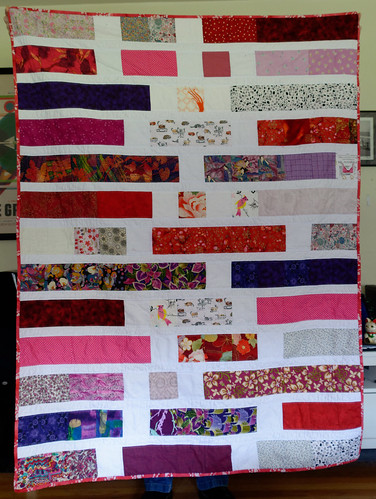 After getting the top for Blossom Season completed in record time, I started hunting for a second colorway that complemented the first. The first was yellow and gold, and the backing I had was multicolored with an orange focus, so I thought red would make a good companion piece. I took a break to make coronavirus masks, but had the top roughed out by the end of the week: 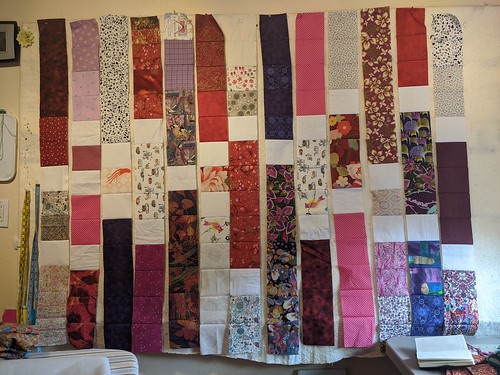 My main nervousness: tolerances. Virtually everything in Portland was shut down, and I was limited to the fabric I had on hand. I had more of this backing fabric than any other in my set, and I only had enough to do two quilts if I split the backing in a very specific way, kept the dimensions very specific, and was willing to have less than an inch of tolerance on each side when quilting.

(If you're not a quilter, just roll your eyes and say that's ridiculously precise and nobody does it that way, because fabric wiggles. You'd be right. I did it anyway.)

I made Summer Twilight slightly different from Blossom Season: one had 13 rows closer together and the other had 12 rows slightly more spaced out; Blossom Season got an orange binding, and Summer Twilight a pinkish-red binding. Same backing fabric, same quilting pattern, same goofy quilt cat tunneling under the quilt during the binding process: 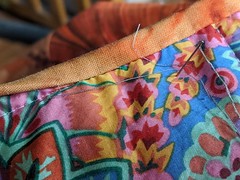 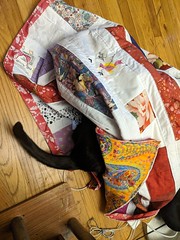 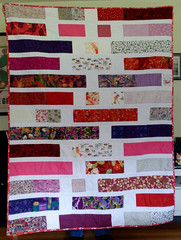 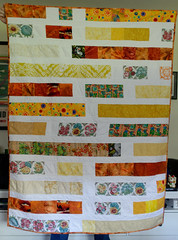