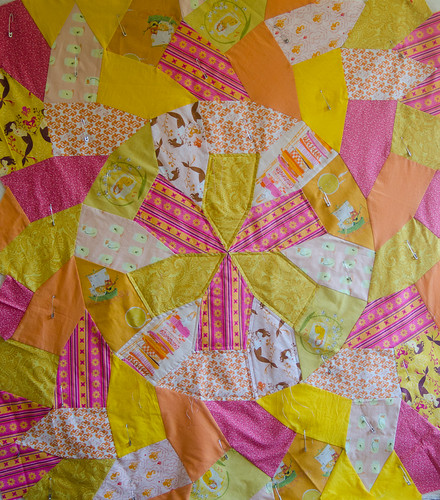 Sunshine in progress
by domesticat.
Photoset:

Recipient:
Clara
Pattern:
Hirschhorn tiling
Level of completion:
Completed and given away

I think it unlikely that I'll ever talk much about the beginnings of 2014, both out of respect for everyone involved, and through a personal need for privacy. I can confirm, though, something I never thought I'd say: I wasn't able to sew. Not just because I had no sewing space -- which was true -- but because I was simply unable. I had nothing within me to draw on.

Rebuilding takes time, and energy. It is not lost energy, but it is energy you do not get to spend in outwardly rewarding and showy pursuits.

I've had an unusual quilt pattern in the back of my mind for some number of years; I've always thought a Hirschhorn tiling would make an excellent quilt pattern, so I looked up the angles and made my own template -- and, of course, put it away for a rainy day. It's an irregular pentagon that can be reversed. It looks like this:

I had no idea when, or if, I would ever use this knowledge.

On the morning of July 25, I got word that Colter and Majo's daughter had been born the previous day, and I walked into my just-finished sewing room and said, "I think I'm ready." I was excited, and instead of hemming and hawing over color schemes, I pulled down the stack of fabrics I never cut into without thought: my "specials." They're united in uniqueness: international, out of print, hard to find, or for some other reason are fabric I believe I will never, ever be able to get again. 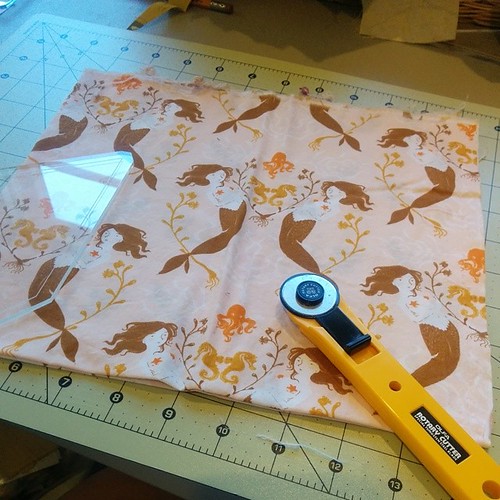 This out of print fabric is a favorite I've been saving for the right quilt. This week, a little girl was born in New York. Turns out it's been waiting for her.
by domesticat.

Beloved out-of-print mermaid fabric? First on the chopping block. I've been hoarding fat quarters of Heather Ross' "Mendocino" line (octopi, sea horses, mermaids) for years, unwilling to slice into any of them knowing I could never afford to replace them. (Current cost, IF you can find it, is easily $60/yard. Good thing they're being reprinted next year!)

Every bit of it, on the chopping block. 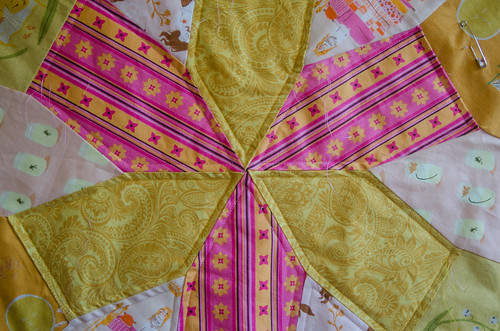 Mix in yellows and pinks I had lying around waiting for the right project, and I had a sudden little ball of ... sunshine. Frogs, octopi, and fairy tales. For the backing, a treasured, ridiculously adorable fabric I'd ordered from Japan years ago, a faux cross-stitch fabric of Cinderella. I forgot to photograph the selvage of it, so I give you the selvage of another fabric from the same collection, in the hopes that I stumble across someone who can read Japanese and give me a transliteration (for search purposes) and translation (so I know what it says): 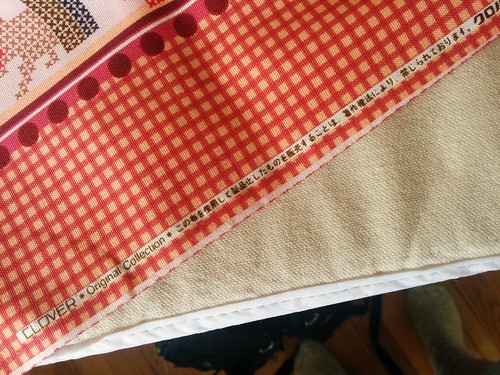 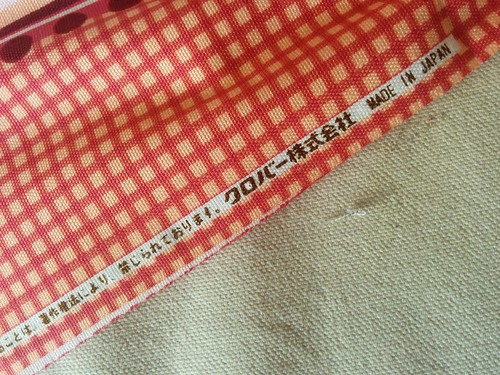 It was a joyful thing, feeling fabric under my hands again and the solidity of knowing my path. I didn't have to doubt or wonder; I knew everything worked together, without question or doubt; all I had to do was take my Hirschhorn pattern piece, cut out the pieces pointed in the right direction, and assemble it. I kept saying the word "sunshine!" over and over as I worked on it, seeking something that was simple, bright, and cheerful. 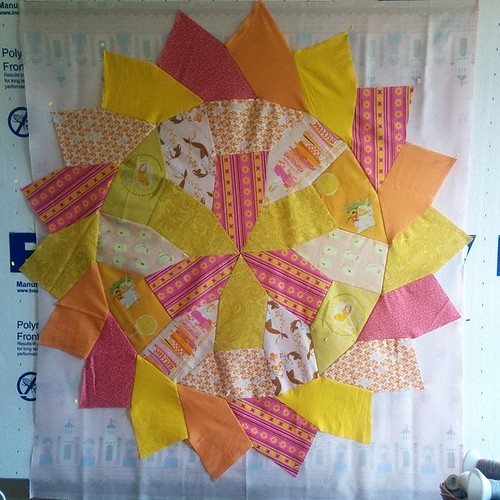 Center medallion with next round in place. #quilts
by domesticat.

I contacted Mike Hirschhorn (who, it turns out, is an Australian college professor) and let him know I'd created a quilt from his tiling. To his knowledge, and mine, it is the first time the tiling's been used in a quilt, but I don't think it'll be the last. Here's to breaking new ground. 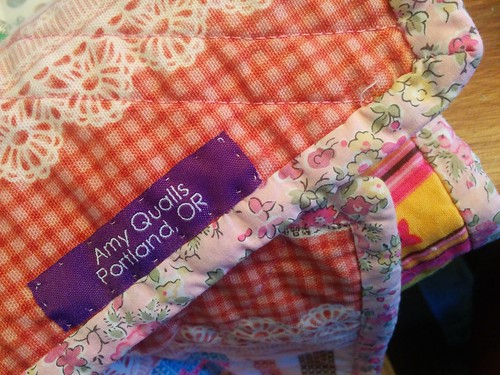 This is one of my favorite

This is one of my favorite quilts you've made! Love both the colors and the pattern!