If you've gotten a quilt from me, I have a favor to ask of you. I realized just now that I've had a flickr group set up for some time now -- flickr.com/groups/amysquilts -- but I haven't really TOLD anyone about it, thus totally defeating the purpose of having a group on flickr. It's devoted to one thing:

If I'm doing this right, my quilts go off and lead interesting lives after they leave my sewing machine and my house. I'd love -- repeat LOVE -- to have pictures. Extra credit for:

and the statement I always tell parents when giving a quilt to their child: "If you kid ever uses it for a Superman cape, I BEG you to take photos."

Several of my friends post photos mostly to facebook, so if you tell me where they are, I'll steal them and add them to the group.

Also, Remixed is done. Let me say it louder....

I ripped the last of the bad quilting out on Sunday morning, re-quilted the last section a few minutes later, then got busy binding it. I spent most of Sunday afternoon -- through two episodes of Mad Men, several phone calls, and watching Adventureland -- hand-sewing the binding, and bless him for dearness, Jeff babied the quilt through the washer and dryer, laboring under the theory that I'd go to sleep at a reasonable hour if he did.

I kept showing up in the laundry room.

Yes, my hen-feathers were in full cluck.

This morning, before I got fully dressed after my shower, I was digging the quilt out of the dryer to see how it had done. Marvelously well, actually; I'd feared popped seams everywhere but my initial check showed not a ONE. Seriously. SERIOUSLY. Tonight I'll look it over again and probably run it through the washer and dryer again, but I think this quilt is rock-solid and will be going to its forever home rather early this week.

I'm a little stunned. I've been ripping stitches almost every night for close to a month now, and to have it be done -- to not need to pick up the seam ripper, turn the lights up high, and do yet more closeup work -- is a bit stunning. My brain hasn't adjusted yet. I keep thinking I can't possibly be done, and there must be more to do.

Trust me, this will pass... 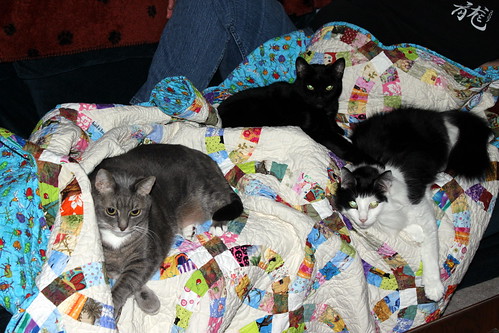