But it's a half-done pile now!

While 'Remixed' is still a big stinking pile of do-over, the good news is that it's significantly more done now. I've been sitting on the couch listening to Jeff's television choices and ripping out stitches a column at a time, alternating between

An evening's worth of work is clearing out the quilting stitches on a strip the width of the quilt and anywhere between 5" and 7" wide, followed by taking it over to the sewing machine and re-quilting the newly-cleaned strip with a better pattern and white thread instead of grey.

No, there aren't any photos. I'm not showing you mistakes THIS horrid!

I'm about halfway done. I'm thinking about doing a minor round of donations to get back episodes of This American Life, which I love listening to while I'm ripping stitches. I have tomorrow off of work thanks to the federal holiday, so I'm thinking of getting up at my usual time and treating this project as my job for tomorrow.

My self-promise: I will finish this quilt, and do it right, even though the fun part's over and now I'm just paying for my mistakes. When it's done, though, I'm going to pick up one of my unfinished projects that still has a lot of color decisions left in it, and work on that for a while. Something that isn't busywork, or more about patience than creativity. 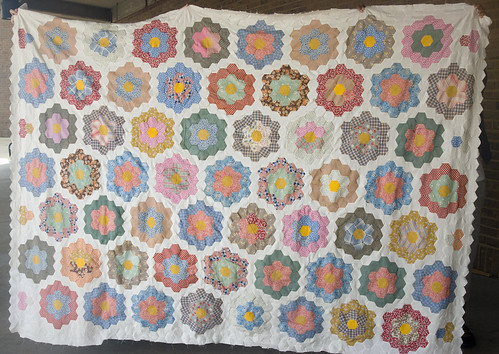 Soon, it will be Really Done.

Also, did I mention that I've taken up knitting again? I'm amyqmc on ravelry.