An intro to Octopus's Garden 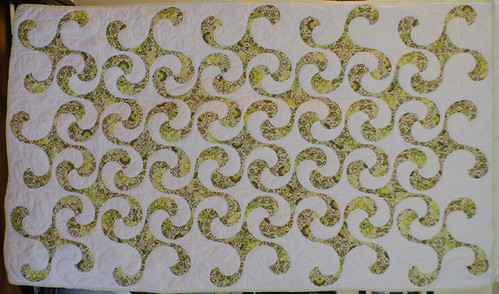 The year books came back to me

With just a couple of days left to go in the year, Alison Bechdel's Fun Home brought me to my unspoken goal of reading 50 books this year. My ability to focus on books has been virtually nil since 2010, and I remember, earlier this year, how keenly I felt the loss. I was once a person who defined herself by her bookshelf, both of books read and books yet to consume, and that part of my life had stopped cold.

When I saved off the last entry ("the things you save from the fire") I said a rather prophetic phrase: "It was time for evasive maneuvers." To recap: I had a bag full of water- and soot-logged fabric that I'd rescued from a co-worker's basement after a house fire. Now what? Math! That's what!

the things you save from the fire

To put it bluntly, my co-worker JJ has had one of the shittiest Decembers I've ever seen. Midway through the month, after a weekend of windstorms here in Portland, we came into work the next Monday to learn that he and his family had been hit by a freak house fire caused by the windstorm. About a week after learning that their house would have to be gutted to the rafters, and they'd be in temporary housing for six months, his wife had a stroke.

He's juggling a gutted house, two teenagers, and a wife who is recovering, but still in the ICU.