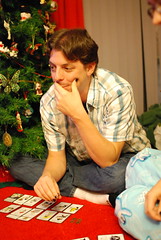 How to put this. How to say it in words. How to damp down thought, impression, compulsion into mere vocabulary, and leave it out for the world to see.

I hugged Brad, and I made a squeaky noise. When I had awakened earlier that morning and realized that I would see him and Alice that day, I realized it had been too long since I had seen them. Years too long.

I look back this afternoon on the years that have suddenly slipped past me and it makes me catch my breath to realize the person I crossed a border to see was someone who, through a bit of luck and good timing, has been a quiet, long-standing witness to the teenage, twenty-something, and thirty-something versions of me.

I turned to Jordan, Adam's brother, who knew none of this back story, and tried to think of a way to put it all into words. How to convey that if I dig back far enough in my memories I can remember years of my life in which Brad was just a name, a screen name, a familiar rhythm of text messages on a screen that despite all odds formed a real friendship? This man flew cross-country for my wedding, for God's sake, and I never got around to putting my hands on him yesterday, giving him a good shake, and saying, "Did you know that of all the things I remember about my wedding, the memory of your showing up to see it happen is one of the best parts?" 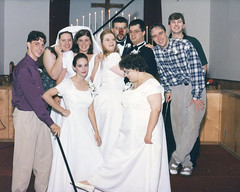 The thing is: we don't say these things. I want to say that I don't know why, but I do. It's self-preservation. If we temper what we show the world, hide a bit of emotion and feeling, we don't expose the tenderest part of ourselves. The world has sharp corners everywhere, and if we didn't protect ourselves a bit we'd spend our lives bruised.

The changing of a calendar year provokes introspection. This morning over coffee and donuts in Tim Horton's I looked at my friend, savored the pleasure of face-to-face conversation, and I ached when I realized that he was the only person at the table who actually had memories of my family, my teenage years, my college life. I could tell every person at the table that every year that passes makes me think of the people I've loved who are not alive to see this calendar change, but Brad actually knew three of the people on that list.

I don't know how to take New Year's. It's a holiday that has intense personal significance to me, but it's a time of mingling melancholy and excitement. Ring in the new. Remember the old. Celebrate who you are with but remember who is gone.

I'll make some calls on the midnights tonight, but tonight, mine is Pacific time. Tonight, everyone, not just me, thinks about where they've been and where they are going, and if my eyes leak a little, I have a socially-acceptable reason to do so.

So here's to 2007. Births and deaths, love and loss, the unending bounty of ceaseless change that is life and the people we share it with. Not everyone I love lived to see this new 2008. Not everyone I love will remember this day when they grow up, even though they lived it.

If you take away anything from my New Year's Eve, take this: be proud to be the friend that makes everyone laugh because you squeak and tacklehug them after not seeing them for years. Tell them you love them, even if it's risky. (Scratch that: especially if it's risky.)