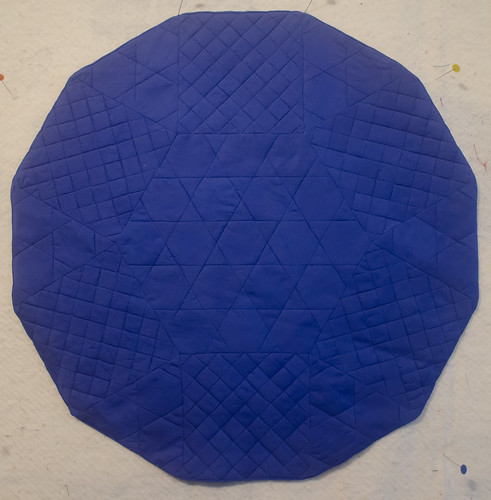 Recipient:
Andy
Pattern:
6.4.3.4 tiling
Level of completion:
Completed and given away

Anyone who has seen my library, or my quilts, knows I've been on a decade-long journey of learning about tilings, thanks to Jacob introducing me to aperiodic tilings and running away giggling as the results detonated in my brain. Along the way, it led to Chaos Theory, a quilt for Earl and Lynette, based on the tessellation origami that Andy, a friend of theirs, had given them as a wedding present:

If you've been in my sewing room anytime in the past eight years or so, you'll have seen this exquisite piece of origami, folded from a single piece of silk. It is Andy's work, and it was the very first piece of art I hung in my Portland home because to me it says THIS IS MY SEWING SPACE: 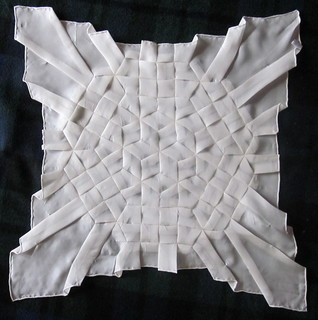 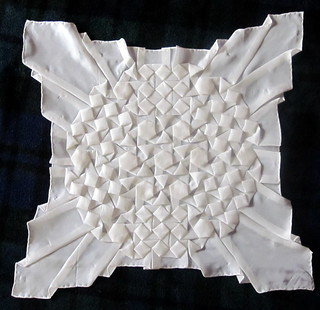 You'd think an astonishing gift like that would start us talking more seriously, but even that didn't do it. We kept up with each other casually on Facebook and occasional emails, but never sat down, made the time, etc. As busy people do. In fairness, we were both going through life crises at the time. It took the Alhambra to do it. I went back and found the Facebook post  (friends-locked, sorry) where it began:

Amy: It's available in English, but I am not turning it up: https://www.alhambratienda.es/en/libro/the-alhambra-with-a-ruler-and-com...

Amy: The other doesn't seem easy to find stateside, either: https://www.alhambratienda.es/en/libro/reading-the-alhambra_768200

Andy: I am quite willing to read something in Spanish, especially if it’s about geometry. And yes, I appreciate very much your choice of reading material!

Amy: They're both in English thankfully. Noah thought it a little odd that I hadn't seen either book before and strongly encouraged I buy them. I wasn't expecting them to be as difficult to get Stateside as they seem to be.

Amy: If you want me to grab you copies of either of these, email me (not FB reply) in the next 8h or so. I'll see it when I get up, and know to keep an eye out while we are around town tomorrow. Alternately, I am willing to lend them to you. The Alhambra gift shops have displays devoted to geometry books. I could have bought all the things.

I bought the books, and shipped them out soon after we got home, and that finally did the trick. Eight years later, we had EVERYTHING to talk about.

Petrichor is the end result; a new friendship, a favor returned, a long-held impulse indulged. I've long wanted to base some more sewing projects off of Andy's work, and I asked him to pick a tiling he loved from his projects. He immediately selected the 6.4.3.4 tiling he'd done: 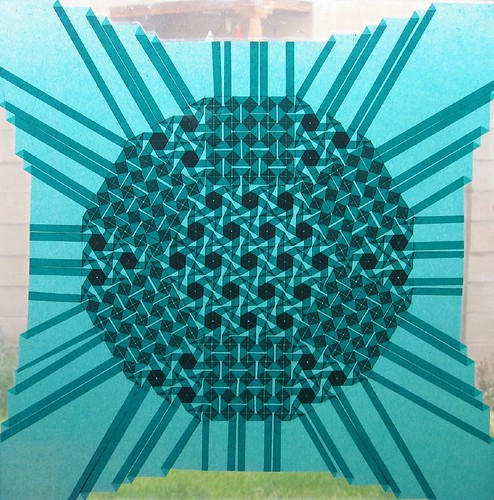 and I started scribbling, figuring out how I could render my own version of the tiling in fabric. Initially, my idea was to do something bed-sized, and then I realized … wait. I've wanted to do wall-hanging versions of tilings, for years, but had no place to hang them. (Note: it is possible that I am dumb and my friends would delight in wall-hanging versions of my work. If I am in fact dumb, do please tell me.)

I started by asking how small I could go. I worked backwards, making the shapes 1/2" per side, and tested with regular quilting cotton and hand-cut templates. At that scale, the joins were clumsy; I needed finer-weight fabric, better templates, or both: 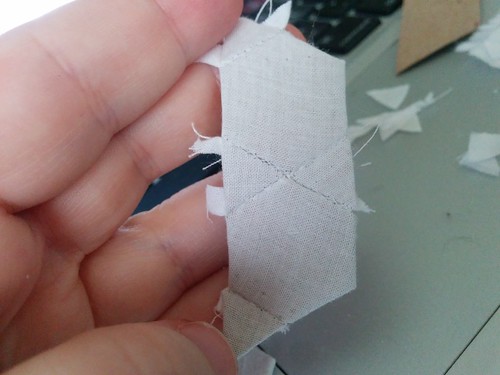 I backed up, changed the shapes to 1" per side, and switched to my beloved fabric for detailed tiling-sewing work, Liberty of London's Tana Lawn, and got the gorgeously crisp joins my heart demanded, and that was enough for me to start: 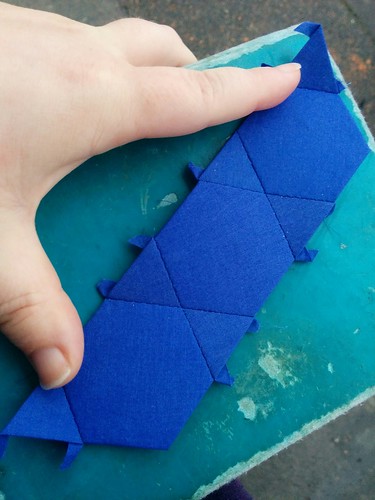 I completed the center hexagon first, knowing it was the easiest part: 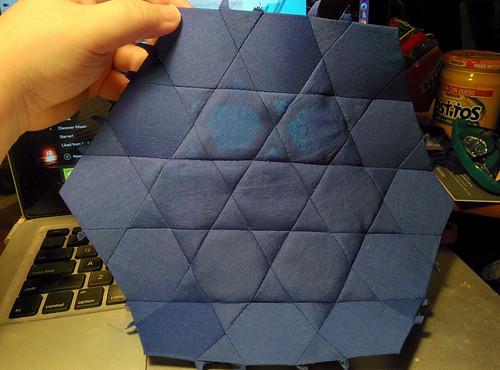 The squares around the outside would be detailed, fussy, small-scale work in comparison, but I didn't really understand how much so until I held the tiny half-square triangles and miniscule quarter-square triangles in my hand: 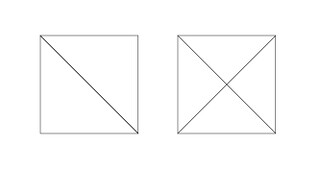 What are HSTs and QSTs?
by domesticat. 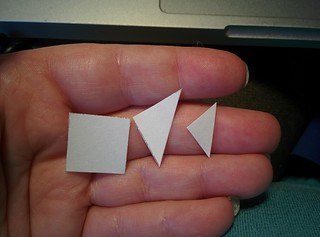 Action photo for scale
by domesticat.

I sweated whether or not I had the scale right; it's one thing to do the calculation for "what size square has a 1" diagonal?" and another to spend hours sewing up your work and trusting it'll be within 2mm of the real size you need. You'd better believe there was a massive amount of relief when I bolted the first square to the center hexagon and proved its size was in fact within the narrow, narrow tolerance I needed: 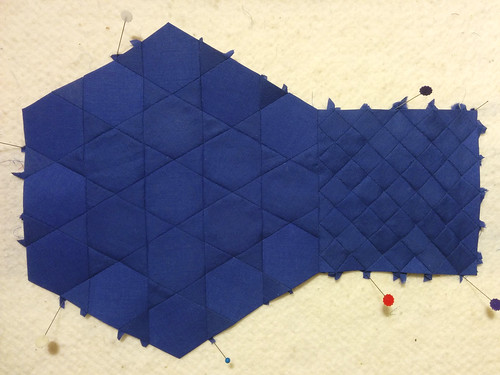 Work continues on this piece, with a goal toward handing it over to Andy in June when I visit him.

Eight years later, we have everything to talk about. He's raided my library, and it's high time I raid his. Past time, perhaps, but there's no time like the present.