forgoing the apple a day

I wish I could say that I've been keeping up with the health-care grouchfest that's been happening in the country over the past couple of years. You'd think that I'd be the world's expert, after Jeff's accident, but that's not the case. It's not that I don't care -- I do -- but I've hit my limit of what I can hear about the medical care crisis in this country before I start having what most sane people would call flashbacks.

The good news is that my retinas are okay. The bad news? None really; my vision is stable for the second year in a row and my eyes are fine. I'll call that a win in just about any playbook.

I had a scary incident a few weeks ago. The vision in the central portion of my right eye blurred and began to do what I can only describe as 'sparkle.' There was no pain and no other change, just an area the shape of a crescent moon in my central field of vision that was strangely prismatic.

It went away that same afternoon. Geof was right to question my blood pressure -- low as usual -- and there were no side effects.

I was glad to confirm that all was well. Ever since my mother had her cornea transplant thanks to Fuchs' dystrophy, I've been more aware than usual of how fragile my sense of sight is, and how lost I would be without it.

…and if you're patient, you'll end up with a scarf.Scarf #2 in the Make Harry Potter Scarves For Friends project is now done. Silly me forgot to take a photo of scarf #1, which was a Slytherin scarf that was a stealth birthday present for a friend, in that "You just thought I was making this for someone else, didn't you?" kind of way I'm so bad at. 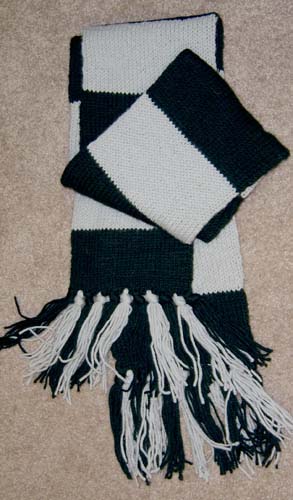 "Don't you think that's a little … overkill?"I'd been waiting in the doctor's office for at least a quarter of an hour, ready for what I was certain would be a completely routine post-op consult. Having never had any kind of major surgery before this tubal ligation, wisdom teeth extraction excepted, I didn't realize that the existence of a surgical incision required a follow-up visit, about two weeks post-op, to ensure that everything was healing correctly.

When Sis called, I was was keeping an eye on Dad while Mom went to Sheridan to renew her car tags. A few minutes later, I noticed that Dad was becoming quite restless. Shortly thereafter, Sis called, and I told her what was going on.

"If you're the only person there, watching Dad, and you see that he's starting to become restless in his sleep, keep a close eye on him. He's probably having breakthrough pain. Don't feel guilty about this—just go ahead and punch the button on his morphine dispenser to give him a bit of extra pain medication. Right now, rest is the best thing for him."

"So I should go ahead and give him one now?"

I cradled the cordless phone between shoulder and ear, and ever-so-quietly opened the velcro pouch that contained the dispenser for his pain medication. I pressed the "Dose" button, heard the two high beeps, and shortly thereafter Dad settled back down into a more peaceful sleep.