you're older than you feel you are 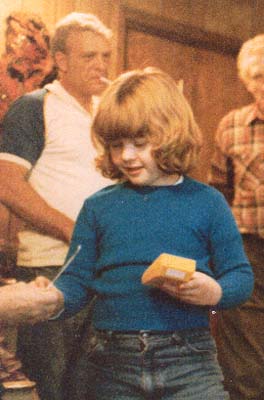 Christmas, twenty years ago. Events stay the same. It's we that change.

I am, however, required to notify you all that due to circumstances beyond our control, Chris and I are sponsoring a new holiday this year. Say hello to Christmas 2: Electric Bugaloo.

...and yet, it isn't all sadness; there are hours and days in which the sadness doesn't come, and making a last-minute run to the store to buy crayons leaves you laughing, marveling at how the streams of light from the snarled traffic on the other side of the road remind you of nothing but a long string of Christmas lights.

Life's like that.Or, as gleefully said to Heather earlier today:

Katy lies; you can see it in her eyes

In olden days, the twelve days of Christmas were likely to bring a standard human unmanageable herds of drummers, milkmaids, lords, rings, and the ever-present partridge. However, it's with tepid pleasure that I note that the holidays are becoming a bit more inventive in their 'gifting' this year.

The "twelve days of Christmas" now refers to the twelve days that my overly-adored Jetta spent at the dealer's, having innumerable tests run upon the suddenly-quirky engine. I strongly suspect the silly thing spent most of those days cozied up in the back of the repair shop, drinking spiked eggnog with distant relations, swapping owner stories, and totally living up the vacation.In the meantime, I got stuck with a crappy Audi A4. Older. Base model.

Christmas Eve. The last thing standing between my current state of consciousness and Christmas morning was a few hours and a vast, primal craving for mint chocolate chip ice cream that felt more akin to heroin withdrawal than a mere, mortal craving.

I was drinking tea on the couch, doubled up on sugar and memories. I had the remote control. Jeff and I were browsing through the wan, unappealing TV listings. This was the night of endless nutcrackers and carols, and there was not even a hope of halfway-intriguing television between then and dawn on the twenty-sixth.

I was trying not to think of home, in the same desperation and utter lack of success that one might encounter while desperately attempting to avoid thinking of a white elephant after having one suggested in conversation.* * * * *

"If we stay up late enough we could watch the local meteorologists track Santa during the evening news."

Since you don't seem to have a claims or complaints department, it looks like I have to address this complaint directly to you. I realize that today is the 23rd of December, and that you're plenty busy putting together packages for all the good little kids, but given that I'm about to fall asleep where I sit, I don't think this complaint can wait much longer.

Give your weblog reader literary joys to last them through the holiday season: