After a bit of a hiatus, one of our semi-completed household projects has been brought to full completion. Last weekend, I asked Jeff to cut the remaining pieces of wood so that we could finish up our new CD rack, since our current plethora of CDs outgrew our old storage facility at least six months ago.Once he'd attached a back and a stabilizing base, all it needed was a coat of paint and we were good to go. I applied the paint yesterday afternoon and brought in the finished rack after dark. I set it up in the reading room and thought, "Oh dear. I hope this works." Otherwise, what in the world was I gonna do with this contraption?

Most CD storage devices are for people with normal-sized collections of music, and are priced accordingly. There is, however, an intermediate area between average Joe's and professional Schmoe's collections that isn't well served by the companies who make CD storage units.

If you're a professional, you don't bat an eye at spending several hundred dollars on a way to keep your CDs stored in order. However, if you have the music taste of Schmoe and the spending capability of Joe, you're in a bit of a bind.

Enter me, who says in all innocence, "So why don't we just build something? It has to be cheaper..."

To which, oddly enough, several of my friends groaned and said, "Oh God, save us."

Why do full shelving, I asked, when instead, two lengths of pipe would work just as well for each shelf? The only problem would be capping off the ends. A few trips to Lowe's later, I learned that they carried a half-inch copper pipe and little cheap plastic caps to cover the ends of the caps.

I thought, why not make a template, plot out where the pipes should go, and drill holes in two pieces of wood to form the end pieces? Attach a base and a back for stability, slap on a coat of paint, and it should work quite nicely.

Originally, I'd planned to do straight shelves, with each CD facing straight out, but either Geof or Jeff suggested that angling the CDs up a bit would work better. It would allow us to 'tip' CDs in and out of the rack, but it would also make the rows of CDs easier to read. The extra space needed to create the tilt would cost us a row, leaving the rack with six rows instead of seven, but the ease of use made up for the slight loss of storage space. 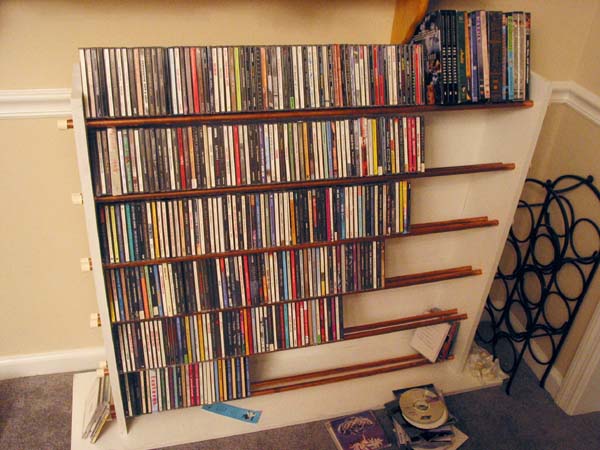 I began stacking the CDs on the rows last night with a good bit of trepidation. Would the wood be strong enough? (Yes.) Would the pipes bend under the weight? (No.) Would the tilted rows work as planned? (Yes.) It's not pretty, but you know what? We spent less than $60.

Since we'd run out of CD storage space months ago, many of our CDs were piled haphazardly around the house. Tonight, after they were all reunited with their long-lost cousins, ("What are you doing?" "Reuniting orphans.") I re-alphabetized them and sat there in wonder: so that was what it was like to have a complete music collection ordered, tidy, and all accessible from one place.

A few minutes later, I tiptoed back into the living room. Jeff was sitting in front of the rack, pulling out CDs at random. I heard the stereo start up shortly thereafter.

I figured for $60 and a little sweat equity, we've done pretty well.

Today, I pack. The to-do list is mostly vanquished, with errands run, new knitting needles purchased, and plans generally set in motion. You know that you're ahead of the game when you're flying out on Wednesday morning and, as of Tuesday morning, all you have left to do is trim your bangs, tidy the kitchen, gas up the car, and pack.

Additional notes for me: the Knitty article on various ways to begin knitting a toe-up sock will be of use to me while I'm gone, as will Wendy's generic toe-up sock pattern. I will have to adapt the pattern for my midget feet, though. Surely socks can't be that hard...

On 2 Dec 2003, gfmorris said...
I done tol' you it wouldn't bend. Probably wouldn't have with PVC, either. But the metal pipe looks better.
On 2 Dec 2003, SuzanR said...
That looks quite nice actually. We recently invested in multiple CD holders. Now to just find a better way to store the videos and DVD's...
On 2 Dec 2003, gfmorris said...
Suzan: The way Amy and Jeff laid that thing out [I helped in a very minor way], you could store VHS and DVD in the same rack if you just spaced out the pipes a bit more. I've been thinking about it some in the last couple days, and thinking that you could standardize the distances for the holes in the side pieces and you could move the rows at will. [Who's Will?]
On 2 Dec 2003, domesticat said...
That's a really interesting idea. One thing I noticed, though - you'll want to drill the holes a bit wider than I did. I used a half-inch spade bit, and it was exactly enough to get the half-inch copper pipe in. If you wanted to do a lot of shifting around, you'd have to use a larger hole and figure out some way of stabilizing the pipes outside the frame so that they wouldn't just randomly fall out if you bumped into the frame. I'm sure there's some way to do that. I just can't think of what it is right now.
On 3 Dec 2003, gfmorris said...
Amy: cotter pins. :) Drill holes through the pipe so the pins are just inside the side pieces. And use a bit that's 1/16th larger than the OD of your pipe.
On 3 Dec 2003, brad said...
Or you could put some threads on the ends of the pipes and screw on some endcaps, making sure that the outer diameter of the endcaps is larger than the holes holding the pipes, of course.
On 4 Dec 2003, gfmorris said...
For rearranging cotter pins are more quickly changed. :)