The lead singer, Cara, likes to photograph her audience. I've learned to avoid the feedback loop by picking a nice side spot at the bar. Here, I'm just another shadowy face, a friend who hangs out with Colter between sets once a year, contributing surprisingly good gig photos for the band's website. 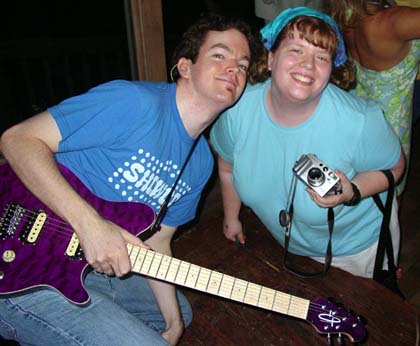 On the final ten minutes of the drive, I explained to the mp3 player that its 'random' choice highly amused me. Sure, of the hundred-plus songs it had at its disposal, its only option was to play 'Time Stand Still' as I crossed into terra familiara.

At hand my paintbrush

Paint needs a progress bar. Appearances are deceiving; what appears to be dry might well be a skin of darkened paint hiding a pool of liquid waiting to stain you.

I am finding green in places that should not, on humans, be green. A fine speckle has set upon the hairs of my head like so much confetti, and on my face like pixie freckles. I have scrubbed most of the paint away from my fingertips, except for the thin line where my nails meet my skin.

There, I am still green.

Seek and ye shall find

Death does not take reservations; it comes and goes of its own free will, leaving the living to tend to the resulting disruption.

I am still tending.

So it's been one year. I can look at my watch and remember where I was. A year ago by the tickings of this watch, I was at Colter's. I showered. I had been instructed to get some rest. While I slept on Colter's bed, Jeff worked on Colter's computer.

The future hung over us, shadowy and low. We knew my father's death was imminent; the oxygen saturation of his blood had begun to drop the day before. Previously, his mask had provided him with eighty percent oxygen. We knew that moving him to 100% oxygen would not save him - nothing would - but if it kept him comfortable, that is what we would do.

But - no. That is not the way to remember.

As I crossed the state line I realized I'd missed the grand turning-out of the lights, the unknown but somehow pre-determined moment when all of the good citizens of Alabama realize it's time to go to bed, and turn out all the lights. There hadn't been many lights in Tennessee, but in comparison, Alabama was utterly dark. I took the state line exit onto the back roads, and did not see another car (or an open gas station) for the rest of the drive.