So much I did not know

Today's mail marked the arrival of a package I've never been able to forget about in the five years since it was created: a time capsule created in Dr. Holbrook's class during the latter part of my hellish senior year of college.

These were my words. Commentary follows.

Just some thoughts here. I've got to get this turned in in about 40 minutes, so I'm going to write as fast as I can and hope that I get everything. Mostly I just wanted to set down where I am right now...five years from now I guess I'll find it a little bit amusing to read all of this.

Hell Semester is almost over. I put my November calendar in with this—I can't believe I'm really going to survive it, but I guess I really will. Today is Thursday, and I only have one class tomorrow (Business Law) and then next week is finals. I have two finals on Monday, two on Tuesday, one on Wednesday, and one on Thursday. 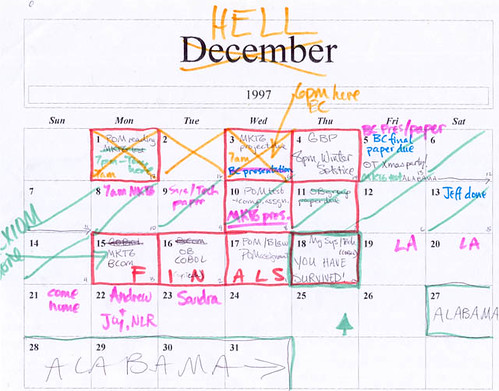 "I've wanted to do this for a long time now," she said. But, it went without saying, she couldn't arrange for this kind of surgery until she had insurance that would cover it. Despite the fact that it was obviously medically necessary.

For as long as I've had the privilege to know her, Eleanor's made jokes about her breasts. Taglines like "Eleanor: the breasts of three women!" and jokes about her bras abounded. Deep down, though, I know she was frustrated with the way she looked, and handled it the best way she knew how—through humor.

The parade of fruits

I had a lot of roommates during my collegiate years, and to be honest, I didn't care for most of them. Monica stands out as the only one I've kept in touch with; we were friends before we became roommates, and despite my worst (best?) shenanigans, we managed to stay friends afterward.

I emailed her this past week to tell her that one of her collegiate games has stuck with me; that I've infected others with it, and it shows no sign of stopping.At some point, just about every person who attends an American college and lives on-campus discovers one beautiful, innate truth: it's really fun to mess with the heads of your drunken college friends. It takes almost no mental effort on your part, and the rewards are so great that it's sometimes even worth staying sober at the parties, just so you can be the one to tell the stories about all your friends the next day.

A small dash of serendipity struck this afternoon. Kat and I are going to make arrangements to go to Birmingham sometime soon—probably next weekend. She needs a particular facial cleanser from a store whose closest outlet is in Birmingham, and we both want to see Hedwig and the Angry Inch. We'll combine trips.

Like today; we combined forces at Costco. Costco, like Sam's, sells everything in bulk. (Need a metric ton of crackers? They've got them.) Since we both live in small households, this isn't always useful for us. We all know that meat is significantly cheaper there, but the packages are so large that they're not terribly useful for us. It occurred to me a few months ago that if two of us were willing to combine forces, that we could split some purchases and come out with a lot of meat for the less-than-horrific amounts that we're accustomed to paying.

Like most native Arkansans, I watched yesterday's inauguration of George W. Bush with a mix of relief and sorrow. For at last, it is over!—and sadly, yes, it is over, and we will probably never see the likes of such attention again. That quiet, rural state has been in the limelight for the past eight years, and what an incredible time it was to be living there when Clinton was first elected.

The closing of this man's presidency closes an eventful chapter in my life, as well.