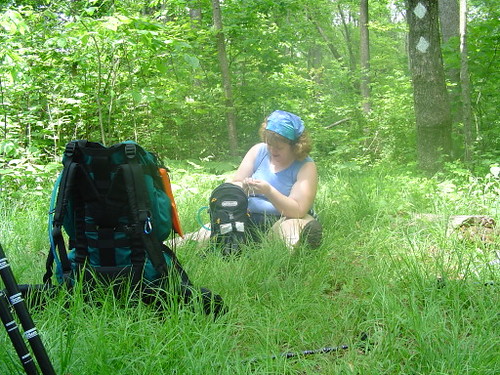 Rechecking my rig
by domesticat.
[me resting at the top of Licklog Mountain (peak #2 of the day)]

I asked myself on the way home: would I have done this if I had known what I know now?

You and whose penguin army?

Live and sleep-deprived from Colorado, I present … us. Click the photo for a larger version. 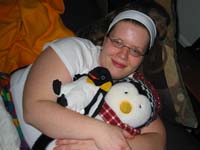 Pandora is the little uber-plushy penguin on your left. Phoebe is the larger penguin with the knitted hat and scarf that we liberated from a thrift store earlier this week.

(Peter, the original Disco Penguin, is at home, guarding the cats.)

"Um, dear, what power tool are you using?"
"Oh, the drill. The littlest drill bit makes a hole that's just a little bit smaller than what's necessary, so it's perfect."
"Ah. I just wondered what in the world you were using to hang hooks."

Beige can piss you off the most

Fear not. I am away, yet not; I'm just in another room. Painting again.

Yes, after six years of living here, I am finally tackling the enormous problem that is The Scourge Of The Beige.

There is silence, scented with bergamot, and a cup of tea that more than one friend has told me whose leaves smell "more like a big sweaty guy named Earl than some proper English tea called Earl Grey."

In the past month, the angle of the sun has changed enough that the guest bedroom now sees bright slats of midafternoon light. For the sixth autumn straight, the cats have made it a point to sunbathe and drowse amidst the motes. They doze in tangles of brotherly paws and tails, kitty-snoring into each others' ears amidst the fresh-folded laundry.